Harley-Davidson Inc. (HOG) may become a casualty of President Trump’s “trade war” policies. In particular, his latest threat to impose a 25% tariff on steel imports and 10% on aluminum has produced a retaliatory threat against the U.S. by Europe on companies such as HOG.

No doubt, this new policy, if pursued by the U.S., would be argued before the WTO and have greater implications on other countries and goods/services. My post of November 12, 2016 made mention of the need for the new Trump administration and Congress to consider a number of factors so as not to, potentially, cause economic imbalances and a catastrophic domino effect on the rest of the world. This is a complicated issue and will bring forth many positions/arguments/considerations and may cause further instability in world equity, currency, financial, bond, and commodity markets until a resolution is reached.

In the meantime, HOG has broken below the intersection of the lower edge of a long-term uptrending channel and the middle of a shorter-term downtrending channel, as shown on the following monthly chart. This apex sits around the 44.40 level.

Major Fibonacci retracement support sits at 41.93 (50%), while major resistance is 49.94 (60%). Until price breaks above or below this range, we’ll likely continue to see trendless, chaotic trading as this already-fragile U.S. company is tied up and used as a pawn in international trade disputes. 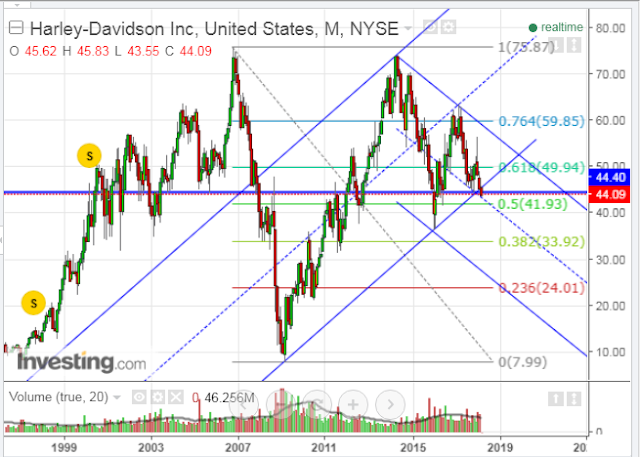