I’ve never put a penny into the world of cryptos, but I find the financial and psychological phenomena around that “industry” (ha!) to be fascinating. Since mid-December, the bloom has come off the rose, to say the least, but it hasn’t been a straight line down. Indeed, Bitcoin a few weeks ago looked like it might muster back into the quintuple-digits again (which would mean merely a 50% drop from its highs), but its hands slipped away from that rope. 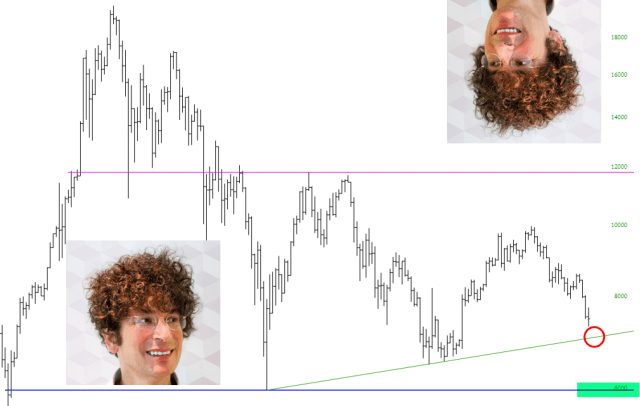 If it breaks $7000 (red circle), I believe the broken triangle will accelerate the selling, and if it breaks $6000 (the tinted zone), you’ll probably see the charts more regularly here on Slope – – because they’ll be a sight to behold.

Of course, that doesn’t mean there aren’t fantastic opportunities to benefit from the wisdom and generosity of others. I’ll leave this here without further comment, since it’ll probably take you two or three reads to really drink it in.