NOTE that has nothing to do with this post: we have SUBSTANTIALLY sped up how fast comments update. Please refresh with a Ctrl-F5 so activate this. OK, on with the post…….

What is it with Texas politicians and the banking industry?

I thought Texans were supposed to be all about cattle and oil. Yet over the decades it seems like they are first in line, shoving themselves even in front of New Yorkers, to provide whatever aid, assistance, and comfort that big banks require. It’s bizarre.

The most famous example, of course, being the Gramm–Leach–Bliley Act in 1999, championed by this genius:

When public “servants” are whoring themselves out to any particular industry, they couch it in the mask of freedom and progress. This was no exception, as Senator Gramm said at the time:

The world changes, and we have to change with it. We have a new century coming, and we have an opportunity to dominate that century the same way we dominated this century. Glass-Steagall, in the midst of the Great Depression, came at a time when the thinking was that the government was the answer. In this era of economic prosperity, we have decided that freedom is the answer.

Yeah, Phil. Whatever. Since you seem to be a futurist, maybe you could clue us all in to blockchain too.

Oh, and at the same time Bill Clinton got some time in between BJ’s to say this:

Removal of barriers to competition will enhance the stability of our financial services system. Financial services firms will be able to diversify their product offerings and thus their sources of revenue. They will also be better equipped to compete in global financial markets

In case you missed all the stability in the financial services system, I think you’ll find it around 2007/2008 or thereabouts.

Anyway, after this boondoggle planted the seeds for a massive financial crisis, Congress actually managed to cobble together some weak legislation in the form of Dodd-Frank, but at least it was better than nothing. It seems, at last, the government had learned a little bit of a lesson. 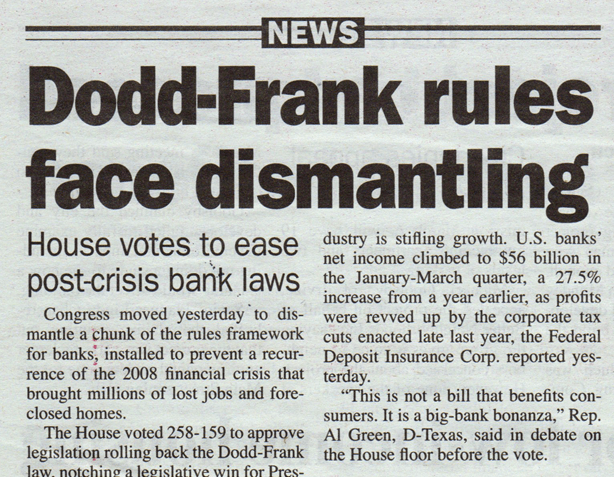 And THIS time the Texan leading the way is some good old boy named Jed Hensarling, who is shown below, mouth at-the-ready for any banking executives that need servicing. 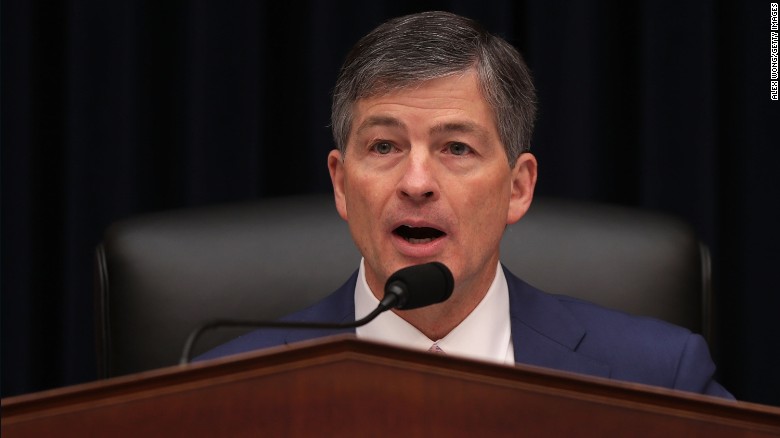 And here’s what HE has to say about things:

So you will see Republicans on the House Financial Services Committee, which I have the responsibility and honor to chair, do the right thing. You will see us offer our vision of banking, and capital markets, and financial opportunity which will effectively repeal and replace Dodd-Frank. For our sputtering economy and for all those who are struggling, help is on the way.

Umm. Sputtering economy? What the fuck is he talking about? Isn’t this the same economy politicians can’t stop bragging is so great, what with almost zero unemployment and a record high stock market?

Oh, and let me take a moment with “help is on the way“, you feckless dweeb-weasel. This goober seems to think highly of that phrase, which makes him sound like some kind of superhero. Just today he said it again:

“We’ve been losing a community bank or credit union every other day in America, and with it the hopes and dreams of millions,” said Rep. Jeb Hensarling (R-Texas), chairman of the House Financial Services Committee. “But today, that changes. Help is on the way.”

Anyway, look, I have no problem at all with planting the seeds of a new crisis. I just wish these political prostitutes would be a little more honest about why they’re doing these things. Because help is on the way, all right. But just for the bankers.