I was debating with myself whether to send this post only to my Gold and Diamond members (whose numbers are now legion………..) or to the entire mass of Slopers. I was compelled to just throw open the kimono, since even at this moment the last post has hundreds of comments, and since this is the last post of the day, I don’t want you poor souls to have 500 comments on a post………..so – – even though our awesome Premium members keep this place open – – I’m going to just do a general distribution on this one.

I also want to thank those of you who are pests. I mean that in the most loving way possible. Some folks write me and ask me for THIS and ask me for THAT. But, see, I really like making products, and I like making them better, so I really appreciate when you folks tap me on the shoulder and ask me for something, because I’m the sort who will get kind of obsessed with finding whatever it is you’re asking for. It makes Slope better for everyone. So – – be a pest!

Anyway, on to the charts. These are all ETFs, and they all have the same message: it is time for the bears to rise again! We begin with the Industrial symbol XLI, which has broken its long term trend from 2009: 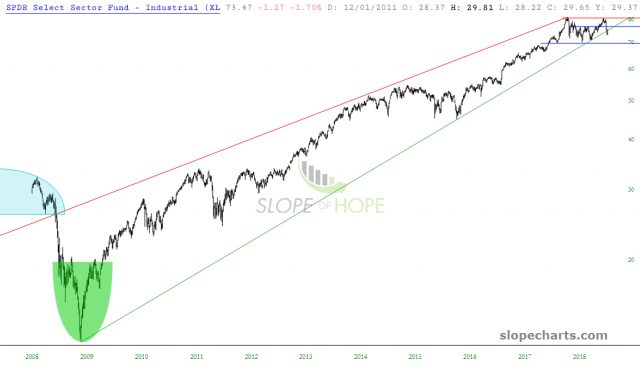 I’m so enthusiastic about XME (mining), I shorted it and bought puts too. I’m showing only the moving averages here. 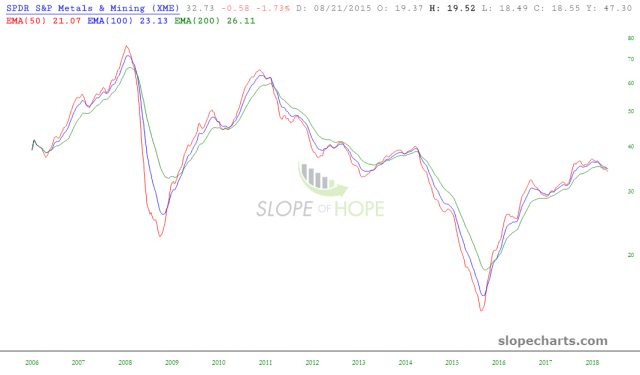 I’ve done the same with financials (XLF) which I consider more important to watch than almost anything else. 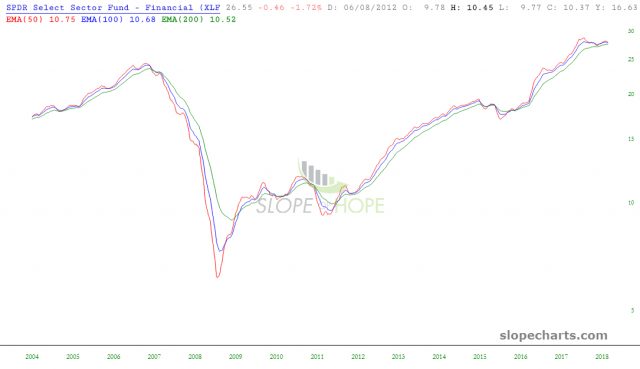 Likewise I consider bonds (TLT) critical, and my Gold and Diamond members know how this relates to the Most Important Chart Ever (MICE) that I’m so hung up on. The topping pattern is nearing completion. 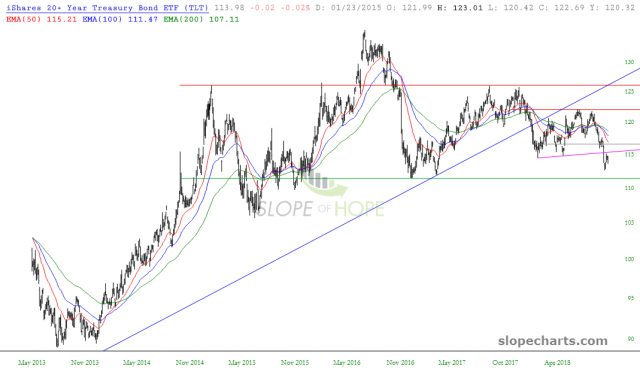 The S&P 500 has been in an uninterrupted uptrend since the days of the railroad barons. You can see how smooth the moving averages are, even with the recent tumble. I’ll be watching SPY closely for a crossover. 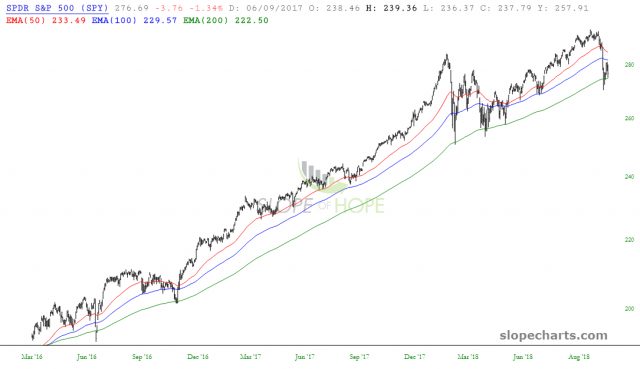 There’s probably no more exciting sector out there on the short side besides semiconductors, and I’ve got puts and a short position on SMH, which is its representative fund. There’s a fantastic diamond top pattern, and as you can see, the 50 EMA has broken the 100 EMA with its sights set on the 200 DMA. 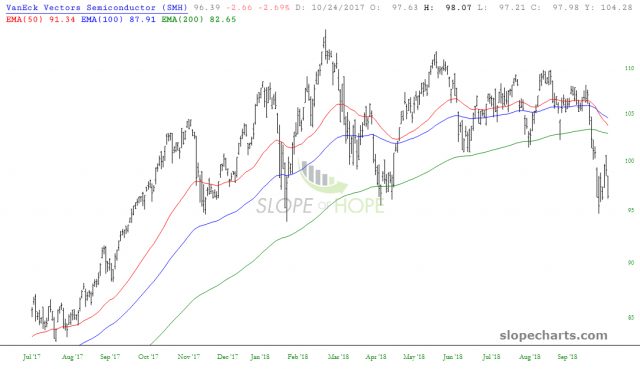 The same can be said for QQQ, the NASDAQ 100, whose moving averages dare not cross one another. It’ll take a lot more weakness in the near term to get those crossovers going.

Regional Banks, KBE, are clearly in a downtrend. We’ve got crossovers galore and a gorgeous topping pattern. 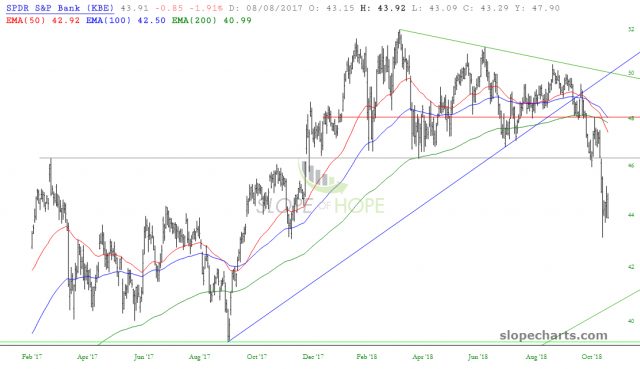 Although the Transports IYT haven’t done their downward crossovers yet, they’re a heck of a lot closer than SPY is to doing the deed. 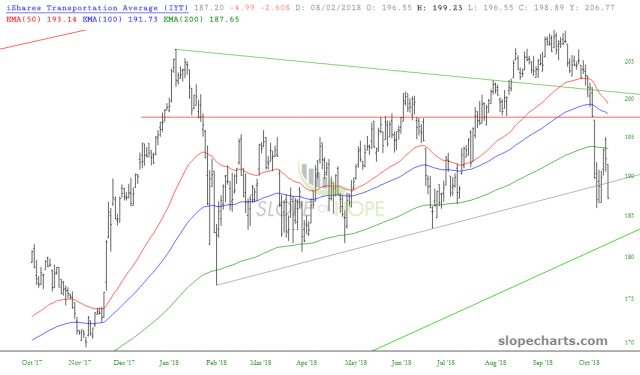 Real estate, by way of IYR, is only just now about to have the 50 day EMA cross below the 100 day. 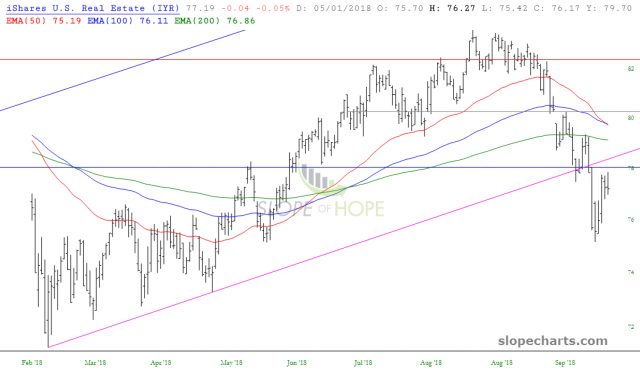 The same can be said for the Russell 2000 symbol IWM which has also just recently pierced an intermediate-term trendline. 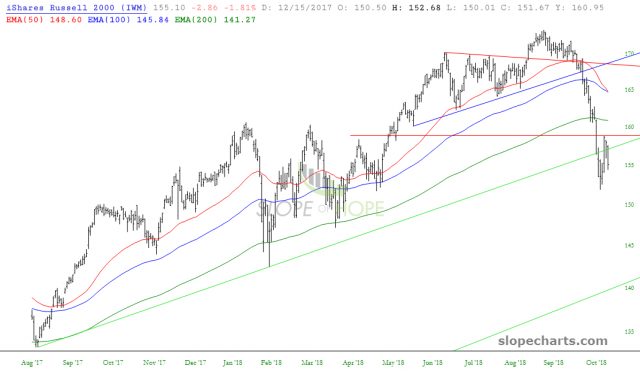 I was delighted on Thursday that financials resumed their weakness. The triple-leveraged symbol FAS has a clean reversal pattern at its broken trendline. 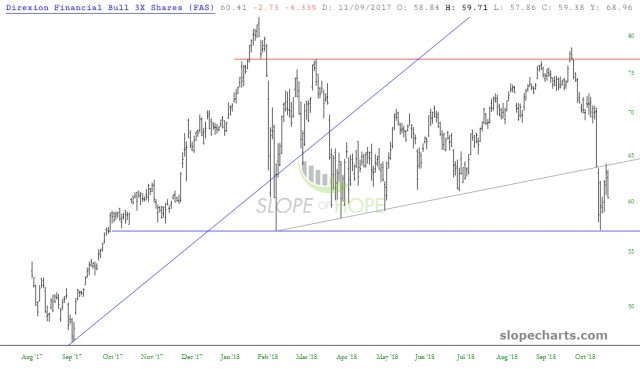 Fibonacci retracements on Brazil (EWZ) have been helpful. I’ve got January 2019 puts on this. 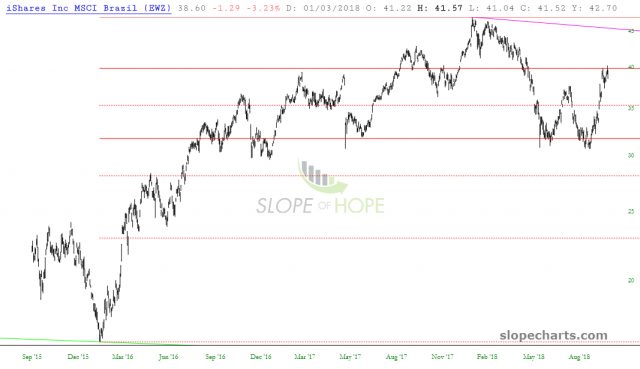 I scanned the ETF database for high-volume instruments and realized I hadn’t been following Germany, symbol EWG, which is sporting a respectable topping pattern. 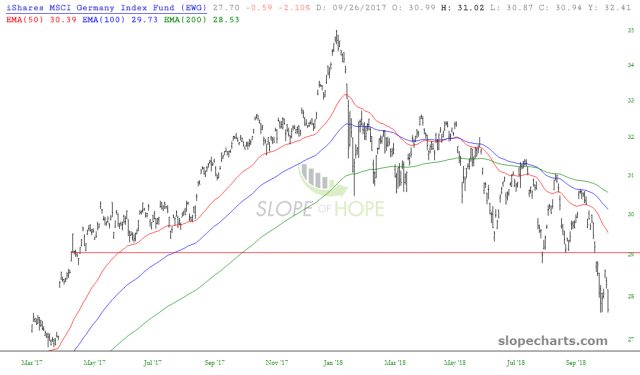 Canada, which I also just added to my watchlist via symbol EWC, has recently formed a nice little reversal pattern. 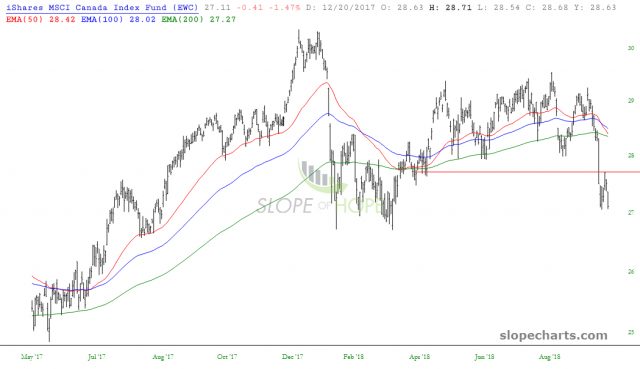 Emerging markets are still a hot mess, and 2018 has been nothing but lower lows and lower highs since January 26th for EEM. 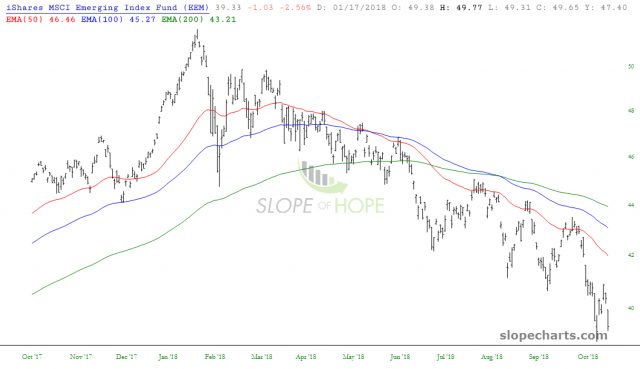 A more exaggerated view of real estate can be seen with DRN, which quite plainly has been breaking down. The next ‘goal’ is to snap below that blue trendline. 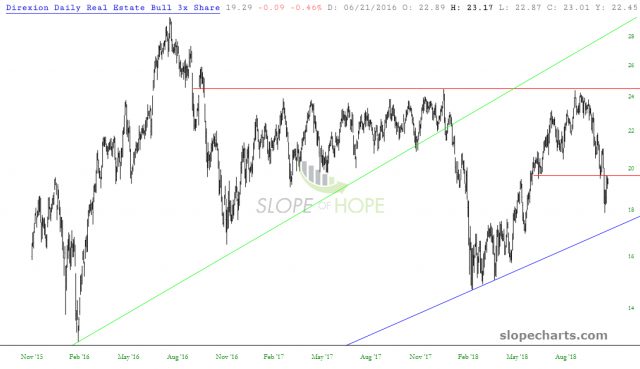 In spite of all the tumult in the market, the Dow Industrials DIA is quietly resting on its 100 day EMA, which it has done many times in the past. There is no true breakdown yet. 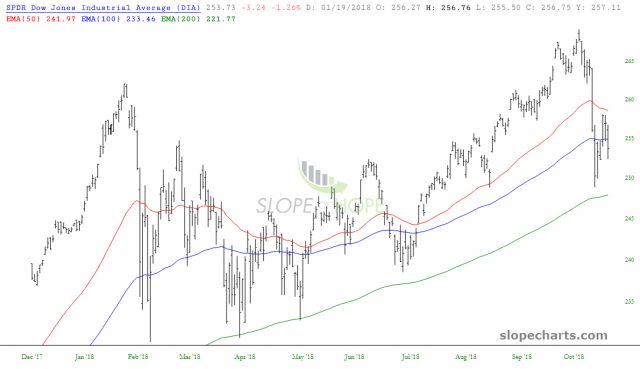 My God, that was a lot of charts. Want to make some yourself? Use SlopeCharts like I do!

https://slopeofhope.com/2018/10/that-he-which-hath-no-stomach-to-this-fight.html
That He Which Hath No Stomach to this Fight