Apparently everyone “knows” that the drop we saw in the first two weeks of October is going to be a repeat of what happened earlier this year on February 9th. I’d like to think of some broader possibilities. There are, of course, practically limitless possibilities for what the market will do next, but let’s consider four distinct general pathways. (Incidentally, it occurs to me that all of these are the S&P cash index, not the @ES, but I’m not about to relabel all of them!)

The first possibility is, again, what everyone “knows” will happen. That, for the 397th time, the stupid bears will be sucker-punched, and new lifetime highs are just a few weeks away. We’ll call this prospect “Alpha“: 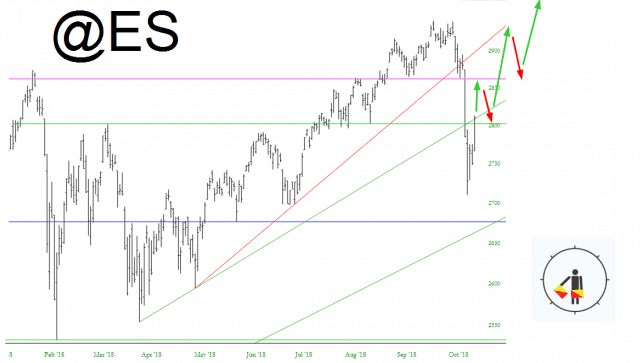 The next, “Bravo“, shows the recent strength of the market feeding on itself, but terminating at the underbelly of the now-broken trendline (in red). After it finishes this counter-trend bounce, it will work its way toward a slightly lower low than we saw last Thursday. 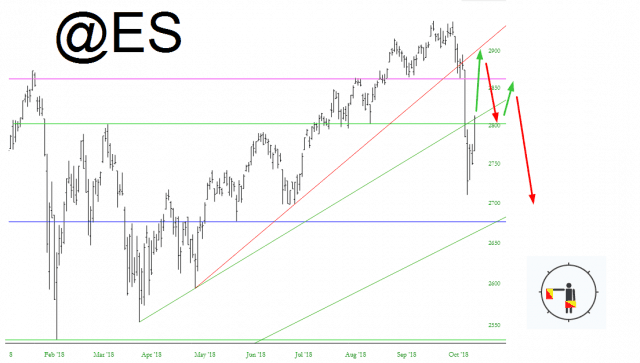 The third scenario, “Charlie“, calls for a more immediate drop, followed by strength up to the now-broken (and lower) trendline, and then another drop after that, somewhat beating last Thursday’s lows. I’m probably most strongly inclined toward this possibility. 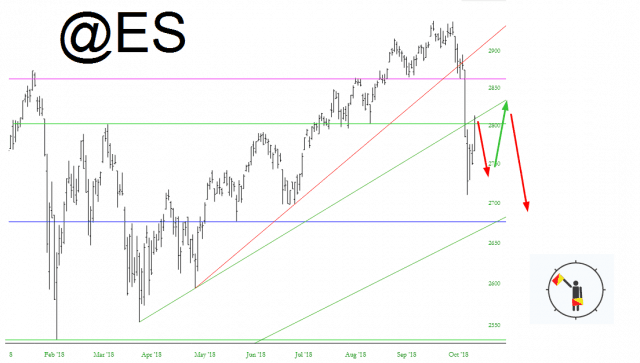 Lastly, the most bearish – – aptly named “Delta” – – considers the bounce of the last few days to be the entirety of the bounce, which merely will be followed by another succession of lower lows and lower highs. 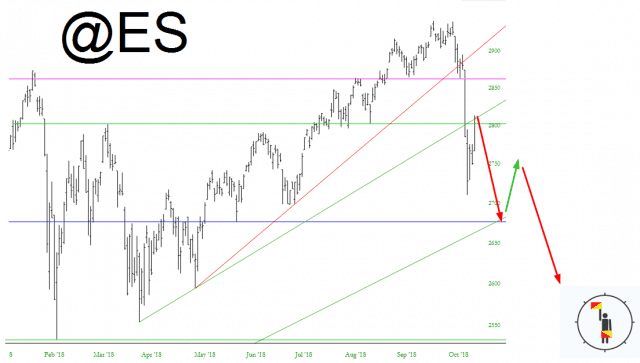 For myself, I am less than HALF as aggressively positioned as I was last Thursday. Back then, I was completely out of buying power, 310% margined, and into 84 positions. Right now, I’ve got 44 positions, am 150% margined, and have a list of 57 stocks waiting in the wings for higher prices at which I’d like to short them.