James Altucher, the self-described “crypto genius”, is someone about whom I’ve written in the past, but as I gaze upon the smoldering landscape that used to be the thriving cryptocurrency industry, I feel compelled to write on this topic again, since I think Altucher’s marketing efforts a year ago speak so much about the nature of the crypto craze at that time.

To be clear, I have no axe to grind. I’ve never lost money with the guy. Never had any kind of personal or professional relationship. Never met him. But, like virtually all of you reading this post, I’ve seen his face countless times on ads (especially late in 2017 and early in 2018) touting the surefire investment power of crypto. He became, in the words of the press, the “face of Bitcoin” (I guess all the other faces were taken).

Altucher is definitely a man who could be described in totally opposite ways, all while being completely honest. You could, for example, talk about him as a successful entrepreneur, popular author, widely-followed podcast host, and multimillionaire venture capitalist. Every one of those things would be true. You could, with just as much honesty, describe him as a man with multiple failed marriages and relationships, a person who by his own admission blew tens of millions of dollars and was at the brink of suicide, and a man who has created businesses that have drawn the wrath of customers and the Better Business Bureau alike. All true. It depends on how you want to spin things.

The “long form” advertisement that he put on the web about a year ago, which you can see for yourself here, definitely leans toward the positive spin. I wanted to break this down, piece by piece, because frankly the entire thing really pisses me off. I will say at the outset that maybe he made every single reader of his a fabulous fortune. You betcha. I have no evidence otherwise. But the content of this ad really rubs me the wrong way, and I wanted to publicly bitch about it in front of the world.

Let’s begin at the top:

Silicon. Valley. Insider. Listen, Jimbo, I’ve lived in Palo Alto since 1984, and I’ve been obsessed with the place for years before that. It’s been the center of my life. You aren’t a Silicon Valley “insider”. I mean, I know this place stone cold, and I’d never be arrogant enough to claim such a title. Have you ever visited here more than a day or two? Having some acquaintances who live in Mountain View isn’t that big a deal.

Did he now? That’s pretty amazing. Did he actually do this himself? Is there proof? Or is this just simple arithmetic done after the fact showing would COULD have taken place, with perfect hindsight? Just curious.

OK, now we get to the part that sends me right up a tree………. 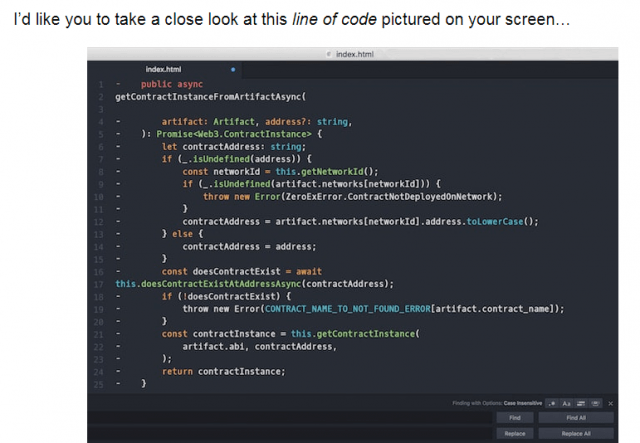 OK, Computer Wizard, this isn’t a “line” of code. It’s a snippet from what appears to be a homepage, and one which appears to have little or nothing to do with some kind of amazing insight into the nature of a particular crypto. Indeed, when I posted the above on ZeroHedge, a number of readers with stronger computer backgrounds than mine described in detail what the code did, which is really little more than some housekeeping functions and  not a valuable financial backdoor.

Let’s see what Mr. Computer Wizard has to say, though:

Again, the “line of code”. Look, I’ve been deeply involved with microcomputers (yeah, I’m so old, that’s what I call them) since 1979, and I have written dozens of books about them. But I’m not going to pretend I know about the “code” behind crypto. However, I honestly don’t think that whatever constitutes a coin is written with simple HTML code that anyone can just glance at. Simply stated, I think he’s just showing these random pieces of code hoping that enough people will be dazzled (and stupid) enough to assume that Mr. Computer Wizard has yielded some kind of amazing insight.

And so, he draws this conclusion (after the fact): 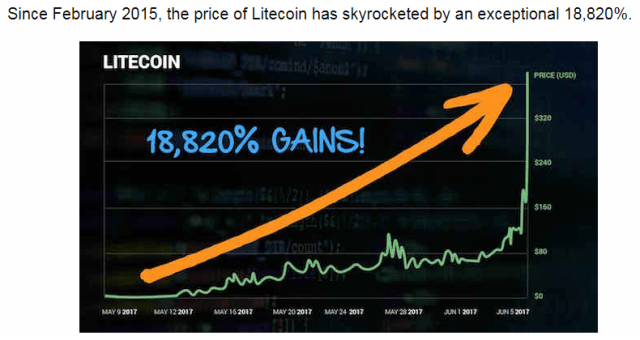 Yes it did. An “exceptional” amount indeed. The updated chart is below, courtesy of SlopeCharts.com – and I’ve marked with an arrow the point where the graph above conveniently ended. I’d say the loss was just as “exceptional”. 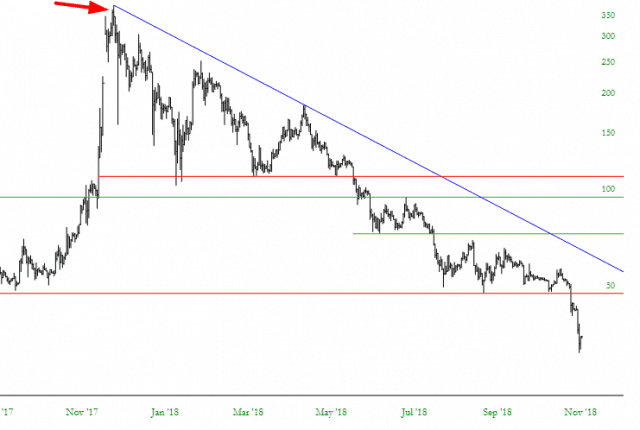 OK, so let me get this straight. I really want to understand. You claim to have discovered an easy way to make ungodly amounts of profit, and the way you decide to profit from it is…………to TELL people about it? Sounds like a dumbshit move to me. But let’s read on.

A “rare” gain indeed. He sure uses some odd adjectives when it comes to the money he seems to love so much while simultaneously leading such an enlightened and spiritual life. James wants to tell us more about himself, though, which appears to be a favorite topic:

Ah, yes, Cornell. The very epicenter of technological innovation. And all this time, I thought their most notable major was in Hotel Management.

I must have missed that. From what I read, you got some boring-ass job in the IT department at HBO.

Nobody knew how to build websites in the late 1990s? Wow, James, you really WERE something special. And as far as seeing the collapse “a mile away”, what about all that stuff you’ve written about how you completely blew your fortune (twice) after you sold your businesses? Where’s the truth?

I’d say those “major media analysts” were right. That is, if you consider the 90%, 95%, or 99% drops in cryptos to be an kind of indication as to what a shitshow the entire thing has become. Bitcoin is the “blue chip”, having collapsed a mere 78%. 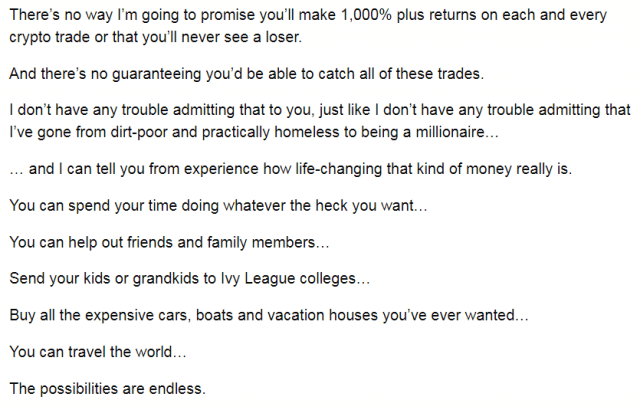 Whatever the HECK you want! Isn’t that cute? So while he’s spending all this time slathering his soul with dreams of cash and assets, he tries to wash away the distasteful avarice by suggesting these hypothetical riches would be used to “help out friends and family members” or send your grandkids to Ivy League colleges which, by the way, Cornell technically is, although it’s considered a bit of a joke among the likes of Harvard and Princeton.

In fact, now’s a good time for a riddle: what do Harvard and Cornell students both have in common? (pause) They both got into Cornell!

There are surely some poor bastards who bought the above come-on hook, line, and sinker. And I say again, maybe every blessed one of them made a huge fortune thanks to Jim the Computer Wizard (and Silicon Valley Insider) who generously shared his incredible discovery with them.

A glance at the Better Business Bureau, however, suggests that at least not every single customer is thrilled with their purchase. 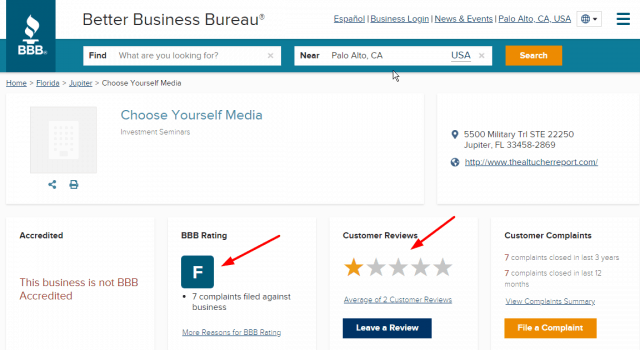 And they’re not alone, if you look at the Ripoff Report. 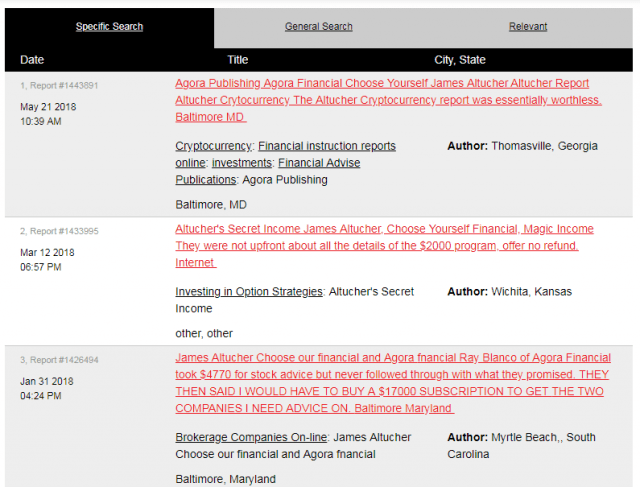 By the way, reflecting on his declaration that he saw the collapse in 2000 coming from “miles away”, here’s a tidbit from an interview he did:

Lost a million a week until it went to zero. Ohhhhh-kay.

But most of the dumb sumbitches reading his advertisement probably don’t know the full backstory. Let’s read more from the sanitized version:

Ya know, if you tried to convince people they could make 50% in a year on an investment, that would be quite a push. But $500 to $97 million in a matter of months? You must really be looking for delusional psychopaths with a claim like that.

Anyway, he wrapped up his schtick by saying there were ONLY 250 spots left, and if I hurried, MAYBE, just MAYBE, I’d be able to still get one of those coveted spaces (I believe the ad came out about a year ago, if not more). So I clicked on it and, lucky, lucky me: 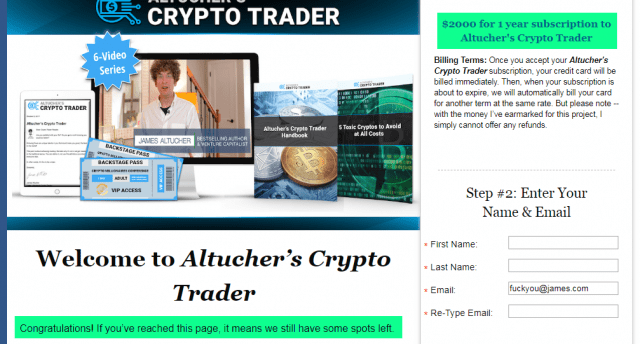 So wait a second. 250 spots. $2,000 a year. That’s half a million a year. So this guy has found a way to virtually print money, and he’s going to sell the secret for half a million a year? I think there’s a humanitarian sitting under that ridiculous bush of hair he has.

After finishing this ad, I saw one other item worth sharing….. 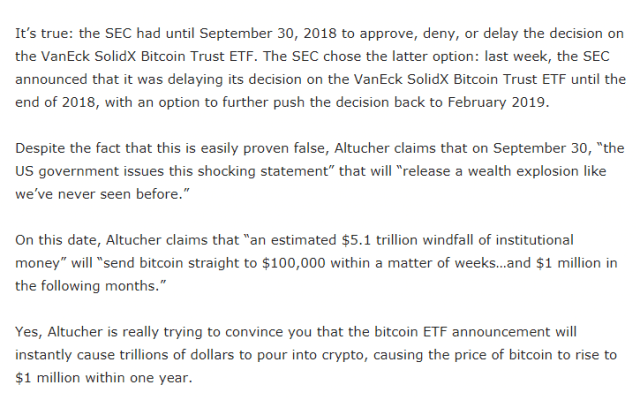 Ya know, I’m not sure what precisely happened last September 30, but one things for damn sure: it didn’t created a $5.1 trillion windfall that sent bitcoin “straight to $100,000 within a matter of weeks” and certainly “$1 million in the following months.”

So there you have it. The revelation of the crypto code from the crypto genius. Make of it what you will. He could be the great computer genius he claims to be. Or he could be a repulsive, money-worshipping shyster who will say or do anything to get subscribers. Or maybe he’s neither and is just one helluva guy. (By the way, you might want to Google the word “bitzumi” if you’re curious about another crypto venture of his.)

One thing is clear, though. The crypto “industry” sure isn’t what it claimed to be a year ago. Who knows how many ignorant folks lost God-knows-how-much money on cryptos. The early adopters certainly made their fortunes. But, in the end, I think a hell of a lot of latecomers were left holding the bag.