We’ve got just five full trading weeks left in the year, and what a year it’s been. For me, there’s two anchor points: the first is the complete head-fake the market played on us bears late in January and early in February, and the second is the market break that began in October 4th and has more or less persisted ever since.

The week ahead of us is quite important, because we’re approaching the G20 meeting next weekend and the promise of some kind of grand bargain between Trump and Xi. I think the chances of a meaningful agreement to emerge out of a meal together are about as good as Janet Yellen making the cover of the next Sports Illustrated swimsuit edition, but I’ve certainly been wrong before. I, for one, will breathe a sigh of relief once the G20 is past, whether there’s a deal or not.

One of the most important charts I’ve been watching all year long remains the financials (XLF), which is literally pennies away from a core failure. My view is that financial stocks could fall for years to come, but we have to get there one downtick at a time. There is a shelf of support still in place, but a sneeze at this point would break it. 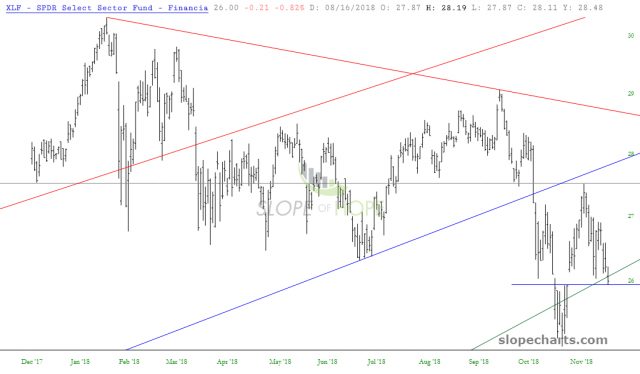 There is a price gap on the SPY at 268.07 which merits attention. It would be picture perfect if we didn’t close that gap. More than that, a failure of 259.85, the lowest level of October, would allow the bears the grasp the baton they’ve been holding even more tightly (maybe even beating the bulls on the head with it from time to time). Those are two simple but important price levels. 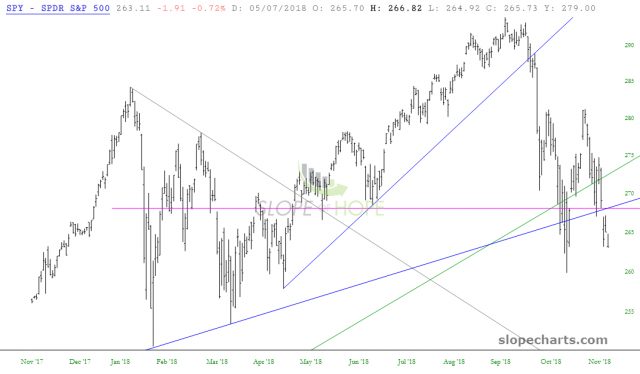 Finally, the S&P 100 ETF symbol OEF similar price levels that must be observed: 119.47 for the price gap and 116.23 for the October low. We are very close to a price failure, so even a modestly weak Monday would do the trick. 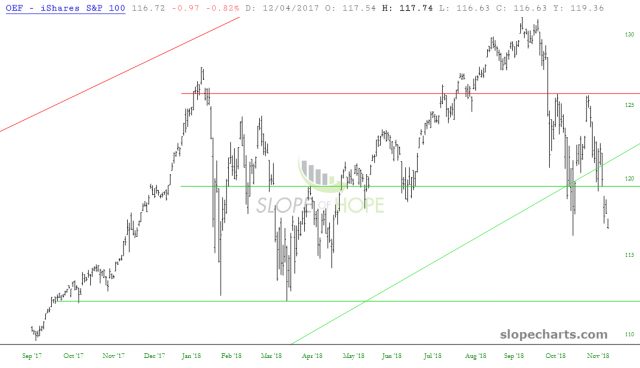