I noticed on a different site someone mentioned the fund SHE, the “gender diversity fund“, and I thought they were just doing a politically correct joke. Sort of a riff on all the virtue signaling going on these days. Nope. This is real. There is seriously a fund based only on having more women than usual in senior management positions. And as you can see below, comparing SHE to the male-dominated SPY, those women sure do make a gigantic difference in investment returns. I’m sure it makes the lack of liquidity and wider bid/ask spreads totally worth it. 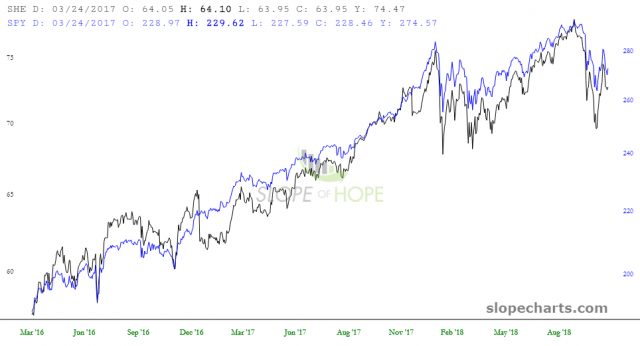 END_OF_DOCUMENT_TOKEN_TO_BE_REPLACED

On my last post I was talking about the expected significant backtest on SPX, and we have now seen that retracement which has reached the 61.8% fib retrace area. At this point I’m expecting the main rally into Xmas to start in the next couple of days and that may well be starting here. However ……..

I did mention in my last post that this retracement might extend lower into a full retest of the October low, and there is a possible setup to deliver that in this inflection point. That bear case rests on a decent quality H&S that has formed and broken down on ES with a target at that retest of the late October low, with a perfect backtest of the broken neckline in the 2717/8 area overnight. The original IHS on SPX looking for the 2910 has failed and this delivers a possible Janus Flag target at a retest of the prior low in the 2600 area. A sustained break below 2660 likely seals the deal for bears.

The bull case is that this is also what I would call a Janus Flag, in that it looks like a topping pattern that breaks down and rejects hard into the preceding high (2815 area). That case is backed up by the decent quality falling megaphone that has formed from the high and would obviously need some confirmation from breaks of upside resistance. The important upside levels on ES area possible double bottom support at 2718, and a sustained break above looks for the 2760 area. Falling megaphone resistance is in the 2730 area and a break above likely seals the deal for bulls. END_OF_DOCUMENT_TOKEN_TO_BE_REPLACED

Hey, let’s face it, no one can screw up an election quite like the state of Florida, right? I guess that’s what’s driving the markets so much higher today. Anyway, I’m keeping a close eye on the bonds, which I believe will soon be repelled by those plunging moving averages…… 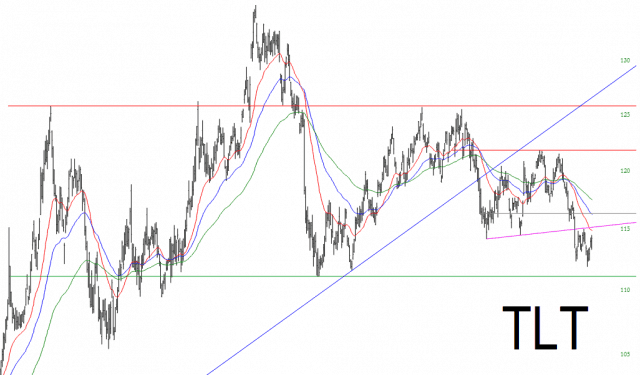 END_OF_DOCUMENT_TOKEN_TO_BE_REPLACED

Pacific Gas & Electric has been hammered by fire liability concerns, and it is priced at the same level it was in 1998. It is down 75%, and this includes adjustments for dividends. But, hey, 1998 wasn’t so bad! The government was running a SURPLUS and we were about $16 trillion less in debt! 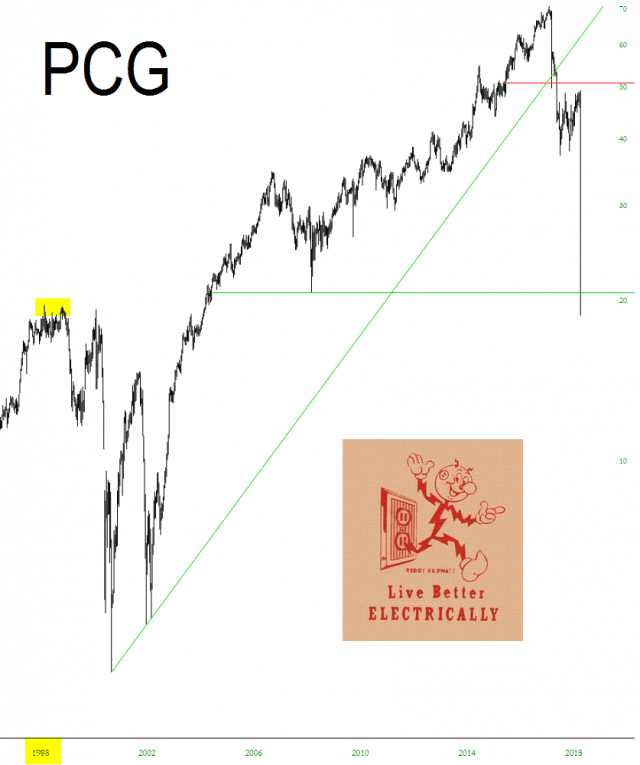