Last month, Facebook (FB) faced outrage about reports it had withheld information about how ineffective its video ads were; now, a New York Times article about its attempts to “Delay, deny and deflect” the scandals facing it over the last few years. In response, the top Democrat on Congress’s antitrust subcommittee called for new regulations on the company.

In the past, I’ve pointed out that antitrust action is the biggest threat to FAANGs, and that, of the FAANGs, Facebook had the most to fear from antitrust action, because it was the most reliant on acquisitions (such as Instagram and WhatsApp) to make up for declining use of its core platform. The New York Times article, and the reaction to it, suggests that political risks for Facebook may have risen, as I elaborate below.

The Significance Of The New York Times Article

The primary criticisms of Facebook mentioned in the first paragraph of Congressman Cicilline’s statement in the tweet above are less important, I think, than the allegations about how Facebook tried to suppress criticism related to them. This appears to be a case of the cover-up being worse than the initial crimes. The “hate speech” mentioned in the New York Times article, for example, included a statement by candidate Donald Trump calling for a temporary halt in immigration from Muslim countries after a terrorist attack. Was Facebook supposed to censor an American presidential candidate mooting a policy proposal (albeit, a controversial one)? Similarly, it still seems unlikely many American voters were influenced by Russian Facebook trolls. The real significance of the New York Times article is that it was published at all. That it was is evidence of a political shift that I believe began with Hillary Clinton’s defeat in the 2016 election.

As Matt Stoller and Mike Konczal noted below, Facebook COO Sheryl Sandberg was mentioned as a likely Treasury Secretary under a President Hillary Clinton, and even as a future presidential candidate herself.

Recall that, prior to her career in Silicon Valley, Sheryl Sandberg served under Treasury Secretary Larry Summers during President Bill Clinton’s administration. Larry Summers, Bill Clinton, Hillary Clinton, and Sheryl Sandberg are all essentially establishment Democrats who are comfortable with large corporations. Matt Stoller is a populist Democrat think tank fellow, whose primary focus is on monopoly policy, as exemplified by his pinned tweet below.

“Concentrated economic power” is a phrase Stoller has used in criticizing FAANGs such as Facebook and Amazon (AMZN): it’s a way to broaden the critique of monopolies beyond the traditional complaint of causing higher prices, which doesn’t apply to Facebook or Amazon. It’s notable that the phrase “concentrated economic power” appears in Congressman Cicilline’s statement above. It’s also notable that Matt Stoller was a supporter of Congresswoman-elect Alexandria Ocasio-Cortez, who criticized Amazon yesterday, as Zephyr Teachout mentioned in the tweet below.

Let me briefly address the “floating anti-Semitic conspiracy theories” charge Stoller mentioned in his previous tweet above before I summarize the significance of the New York Times article on Facebook. That charge refers to this paragraph in the Times article:

While Mr. Zuckerberg has conducted a public apology tour in the last year, Ms. Sandberg has overseen an aggressive lobbying campaign to combat Facebook’s critics, shift public anger toward rival companies and ward off damaging regulation. Facebook employed a Republican opposition-research firm to discredit activist protesters, in part by linking them to the liberal financier George Soros. It also tapped its business relationships, lobbying a Jewish civil rights group to cast some criticism of the company as anti-Semitic.

The Jewish civil rights group the Times alludes to there is the Anti-Defamation League. What’s interesting here is that Facebook allegedly lobbied to have some criticism of it characterized as anti-Semitic at the same time it discredited other critics as being linked to George Soros, when the invocation of Soros’s name has been considered by some to be an anti-Semitic dog whistle (and vehemently denied by others). As it happens, at least some critics of Facebook have been funded by George Soros’s Open Society Foundations, as the Dutch activist group Bits of Freedom confirmed to me in the tweet below.

If you follow the thread my tweet above replies to, you’ll see that Facebook’s actions to discredit its critics, both with the ADL and with mentions of George Soros, have generated a lot of outrage on the left.

Now, to summarize the significance of the New York Times story on Facebook: I think Hillary Clinton’s defeat in 2016 opened a space for liberal populists such as Stoller and Ocasio-Cortez, who would like to be tougher on companies like Facebook. I think it also opened up individuals in Clinton’s orbit to greater press criticism. I realize it sounds cynical of me to suggest that the press might have eschewed publishing a newsworthy negative article about a Clinton associate had Mrs. Clinton won the 2016 election, and I can’t prove that it would have, but I don’t think it’s a coincidence that such negative articles about Sandberg and former Clinton donor Harvey Weinstein (pictured below) only came out after 2016. 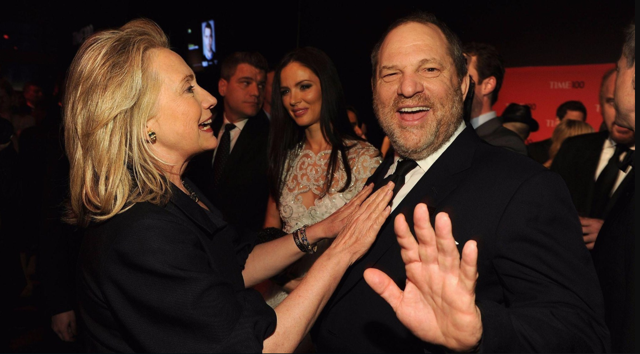 It’s hard to say what concrete impact the Times article will have on Facebook in the near term. Congressman Cicilline offered some strong words, but recall that Reuters reported he raised concerns about Amazon’s acquisition of Whole Foods last summer, and of course that acquisition ended up sailing through. Speaking of Amazon, that company will likely be the near term beneficiary of the negative Facebook news, as it will draw attention from Amazon’s second headquarters misstep. As in my previous Amazon article, I’m not going to present a hedge for Facebook here, as I presented one a few weeks ago. You can use Portfolio Armorto scan for a current one, if you like. Alternatively, maybe you will consider exiting your Facebook position. As NYU marketing professor Scott Galloway tweeted below, Facebook’s employees are considerably less optimistic about the company’s future now than they were last year. Maybe you are too. Let me know in the comments.