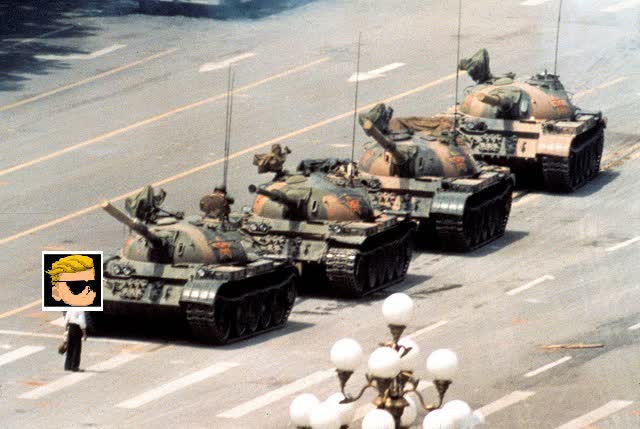 Crackdown On The Meme Stock Revolt

In our last post (Capital Insurrection), we noted two possible reactions to the meme stock revolt: corporate sponsorship or crackdown. On Thursday, we got the crackdown. Let’s recap where we are now, and close with a trade idea: another hedged bet on the rebels.

One sign of a genuine populist movement is that elites don’t recognize it as such initially. Former hedge fund manager and current bitcoin enthusiast Mike Novogratz offered an example of that this week, when he compared r/WallStreetBets to BLM protestors. Novogratz also suggested what they were really crying for was “DeFi” (decentralized finance, i.e., crypto).

As we pointed out last time, this comparison strains credulity:

One difference between BLM and r/WallStreetBets comes to mind immediately. The BLM riots destroyed small businesses in cities across America, while WallStreetBets so far has saved at least one business, AMC. Thanks to Redditors bidding up its stock price, the movie theater chain was able to complete a secondary offering, raising hundreds of millions of much-needed dollars. Novogratz should know something about the damage caused by BLM – his fund bailed out many of the rioters.

With respect to Novogratz’s thoughts about decentralized finance, if you read popular posts on WallStreetBets like this one (“An Open Letter To Melvin Capital, CNBC, Boomers, and WSB”), you don’t see anything about “DeFi”. You see still-lingering rage about what happened in 2008.

We mention it again here because the establishment’s treatment of BLM is instructive as a counterpoint.

So Much For Corporate Sponsorship

Maybe big Wall Street firms will donate money to an AstroTurfed nonprofit that claims to advocate for small investors.

Another possible resolution is a crackdown. WSB got a taste of that on Wednesday when Discord shut down its server.

We got our answer Thursday.

From Robinhood To Sheriff Of Nottingham

Updating Our Analysis Of The Meme Stocks

Each trading day, we run all the stocks and ETFs with options traded on them in the U.S. through our initial screens, and then we rank the ones that pass based on our analysis of their returns and options market sentiment on them. On Thursday, 1,864 securities passed our initial screens. Sorting them based on our estimates of their potential returns over the next six months, BlackBerry was #26, as you can see below. 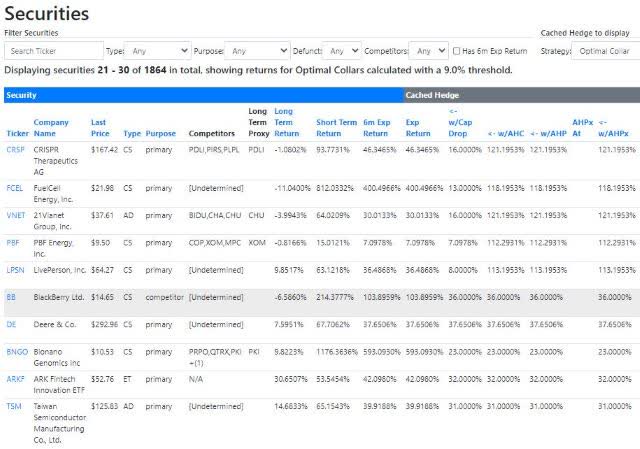 Screen capture via our admin panel. For an explanation of what the columns refer to, see here.

Nokia ranked even higher: #15. That made the trade idea below possible.

A Hedged Bet On Nokia

Nokia offers an even better setup than BlackBerry did earlier this week in terms of upside potential versus downside risk. Let’s say you picked up a 1,000 shares of NOK on the dip Thursday. This was the optimal collar, as of Thursday’s close, to hedge your 1,000 shares of NOK against a >25% drop over the next month while capping your upside on the stock at 100%.

It’s rare that you’re able to cap a collar this high, which makes for the attractive risk-versus-reward setup here. Also, note the negative hedging cost. When opening that collar, you would have collected a net credit of $100, or 2.13% of position value, assuming, to be conservative, that you placed both trades at the worst ends of their respective spreads (buying the puts at the ask and selling the calls at the bid – in practice, you can often buy and sell options at some price within the spread).

Bear in mind that we used a thousand shares as an example there; the same approach would have worked for larger positions. You’d just add more zeros in the “shares owned” field, and you’d get more zeroes in your net credit. A 10,000 share position in NOK collared that way would have yielded a net credit of $1,000, and so on.

Heads You Win, Tails You Don’t Lose Too Much

Your best case scenario here is a double in your NOK shares in less than a month, plus you keep that ~2% of position value in the credit. Your worst case scenario is a loss of 25%. Heads you win, tails you don’t lose too much. Be sure to scan for an updated optimal collar for NOK before placing any trades. Also, remember that we’re describing a collar, where you own the underlying shares. We are emphatically not suggesting you write naked calls on this or any other security.