I've been having a careful look at quite a few charts this morning and it is clear now I think that the Osama Top was a major interim top, and that we're now seeing a wave down from that top. Carl Futia is seeing the likely low for this wave down in the 1285 area, but looking at the weekly chart the obvious target for this wave down is at the March low, to make the third touch of the lower trendline for the rising wedge that now looks like the dominant pattern for this bull market: 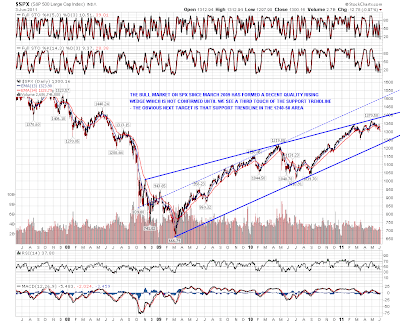 If SPX does make it to that lower trendline and bounce there then that would be a very attractive long entry for another wave up. I've added the possible upper channel trendline on the weekly chart to show that the next wave up would have two possible targets. The first target at 1400 or slightly over to hit the upper trendline of the rising wedge, and the second (channel) target if that trendline broke is somewhere north of 1500. Shorter term on SPX there are two potential necklines for possible H&S patterns that could be forming. The first is in the 1295 area, which is being tested overnight on ES, and the second is again at the March low: 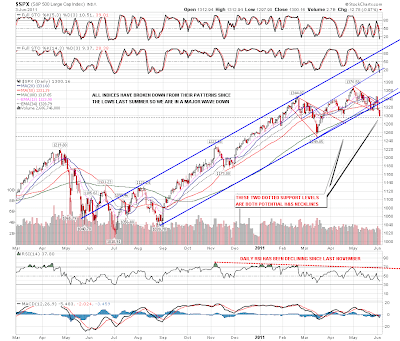 There is reason to think that we might bounce here. SPX closed below the daily bollinger bands on Friday and that's generally a good signal to  expect a decent bounce shortly afterwards: 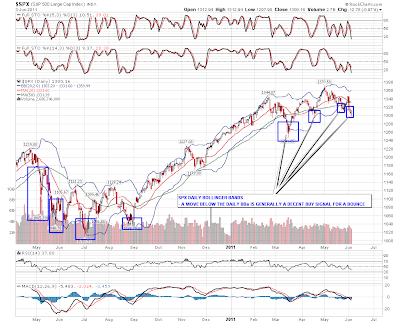 On ES we have entered a key support zone with a number of possible bounce levels. There's a potential H&S neckline at 1290.5 of course. 1285 is also a significant support area as is 1280. Below 1280 there's mostly empty air until the March lows, and if 1280 is broken with confidence then we could see a rapid waterfall to those March lows:

On Vix we've seen another touch of the current range highs on Friday and unless that range is going to break up then the next obvious move on Vix is back to range support in the 15.5 to 16 area: 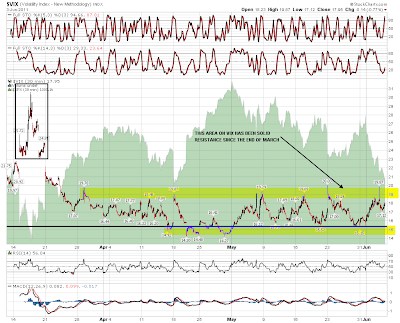 I've been having a careful look at EURUSD this morning, and that has now made back most of the recent decline with the rise so far looking rather impulsive. I mentioned a few times at the recent high that EURUSD had not made my upside target and I'm working on the theory at the moment that EURUSD has not made the major high that many think it has, and is now returning to hit my upside wave/channel target north of 1.50. I don't use EW much but I've marked up a possible count that fits well with my overall rising channel.   It doesn't have a huge impact on equities if EURUSD is still rising, but I'd expect it to slow down any move downwards on equities. It will have a larger impact on commodities, which have been much firmer than equities in recent days:

I'm not going to post any RUT or NDX charts today as I thought I should do a more general review but I have a last chart to post that look very interesting, and that is the weekly chart for Shanghai. That's interesting for a couple of reasons, the first being that the last major high on Shanghai was in Summer 2009, so there's no obvious reason to think that Shanghai is currently in a bull market at all. The second reason is that a symmetrical triangle has formed over the last three years and we've just seen a support hit on that. Any more downside on SSEC might well signal the start of a major new decline, which is interesting to consider in the context of equities elsewhere. It seems too early for the bull market since March 2009 to have ended, but the chances are that we are now in the later stages. I'll be watching the test of the March lows on SPX carefully when it comes. A break down from there would look very ominous: 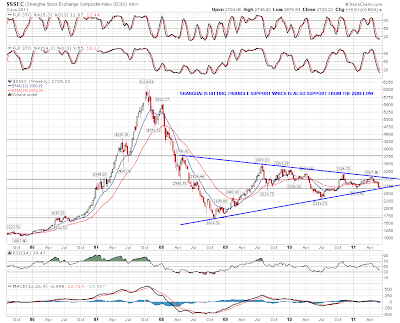 Short term I'm looking for a bounce on SPX, and if we see a strong bounce then I'll be looking at the daily SPX 20 & 50 SMAs as possible bounce targets. They're both in the 1331 area this morning.