I called my brother last weekend and told him that we might get an unexpected bearish breakdown this week or next week and that the QEX rally that almost everyone, including me, has been expecting might be delayed or even possibly cancelled. I was looking at the AAPL chart at the time, which I've been looking at a lot this week, and yesterday morning it looked as though the H&S there might fail. It hasn't though, and looks grimmer than ever after a perfect retest of the H&S neckline and failure of a small IHS from the low yesterday. This is an important chart and AAPL is big enough to move both the NDX and SPX significantly just as SPX is poised just above major support. I tweeted an hour ago that AAPL looks ready to bury short term and that is what it is from a technical viewpoint: 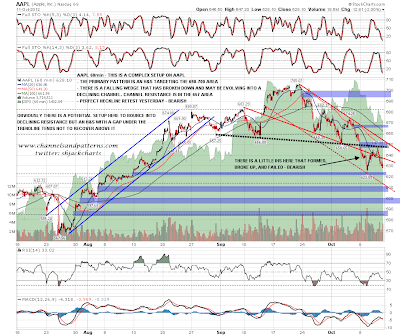 On the SPX daily chart there was a spirited attempt to rally towards the middle bollinger band that failed and SPX closed just above the lower band yesterday. That's not inherently bearish yet but it isn't bullish either: 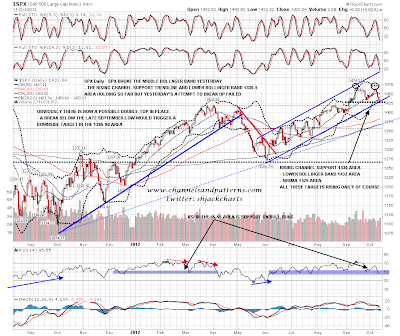 The rising channel from the June low on the SPX 60min chart is still holding and until that breaks this level just above major support is only a decent long entry. I'll be watching for a possible break today: 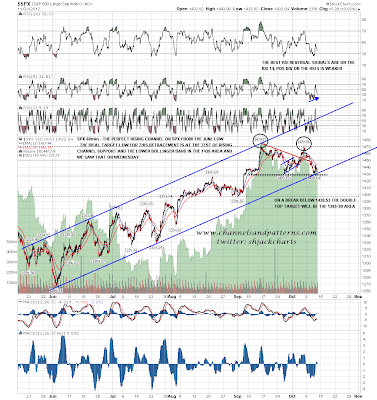 I've been watching TRAN as an indicator this week and there was a failed break up there yesterday which is neutral to bearish. A new short term low would invite a test of the late September low though it's worth noting how much TRAN has outperformed SPX since then: 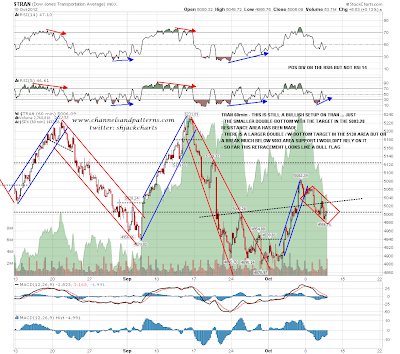 There's not much to say today about gold and oil. Both look a little lost here, waiting for a break in either direction. On gold that break is likely to be downwards, which is bearish for equities as QE gives them a strong positive correlation. Oil could go either way though it's worth noting that there was negative RSI divergence at the last high on the 60min chart and oil has not reached the 30 level on RSI since, which I would normally expect. Leaning slightly short term bearish there. I won't post either chart today as time is short and they really aren't that interesting this morning.

EURUSD has almost made the little double-bottom target at 1.30 since yesterday. There is significant resistance both there and at declining resistance from the rally high at 1.3035:

TLT is looking very interesting here. I did mention at the last reversal down that the falling wedge there was fully formed and there was no technical need for wedge support to be reached before a (69% bullish pattern) break up. TLT  closed at falling wedge resistance again yesterday and a break up would look very bullish, and somewhat bearish for equities. If we see a break up then the wedge target is a retest of the highs, though wedges often don't make target. I also have possible declining resistance in the 125 area, as wedges sometimes evolve into channels: 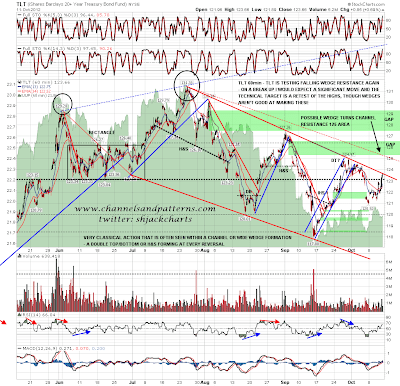 I have mixed feelings here. Short entries just above major support levels end badly much more often than not, but the AAPL chart looks bearish here and the retracement on gold from 1800 that I've been predicting for several weeks would also be bearish for equities if it ever actually happens. Octobers are historically bad for gold of course. The bull take here is that a double or W bottom is forming here on SPX with the trigger level at 1444 and a target at 1457. That could still happen and if it did then SPX might well run up a very long way.

The bear take is definitely well worth considering carefully here though, as we have AAPL, weak gold, and a possible break up on TLT coming. I'm watching TLT, declining resistance on ES at 1434.5 which has just been tested and is holding so far, and the support trendline on that SPX rising channel. I mentioned yesterday that bollinger band pinches generally resolve into a strong trending move and if we see the SPX rising channel break today, then the double-top target is in the 1395-90 area and we could well see a fast move towards either that or the possible H&S neckline at 1396 SPX.