Another inconclusive day on ES yesterday and it is looking very compressed this morning. I have some increasingly shaky looking trendline support in the 1505.5 area, the 100 hour moving average is short term support in the 1503.75 area and main support and resistance are still in the 1491 to 1511 band. I’m  still leaning short:

On the SPX 60min chart the 60min RSI is trading around the 50 area, which as we are still close to the highs is saying consolidation rather than retracement. If we don’t see a break down very soon we’ll most likely see a break over 1515 SPX. Until then though, just below strong resistance makes a lousy long entry level: 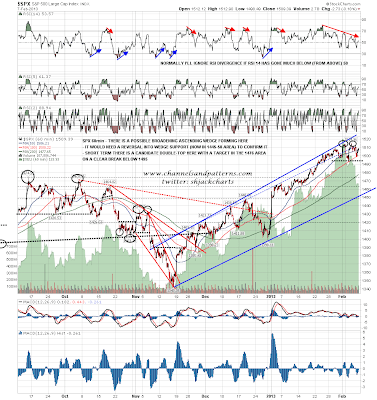 If we do see a break up today, the obvious target is not far above, and that is at the weekly upper bollinger band, now in the 1521 SPX area. The last five weeks have closed at or slightly below this level. A move to there would not compromise the negative RSI divergence on the daily chart: 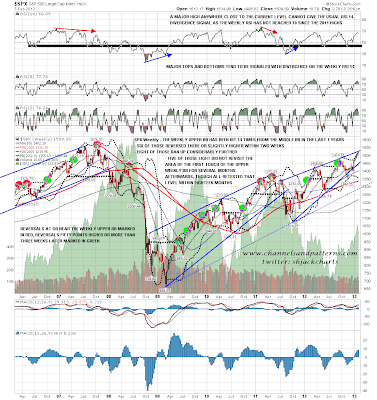 EURUSD confirmed the current downtrend yesterday and is giving some support to the short side on equities while that lasts. The obvious downside targets are the rising support trendlines in the 1.323 and 1.315 areas:

CL is still forming the right shoulder of a very possible H&S pattern. Strong resistance in the 97 area, neckline support in the 95 area:

AAPL broke up from a worrying looking bear flag channel yesterday and is on the way to test falling wedge resistance in the 480-5 area. What happens there obviously looks important: 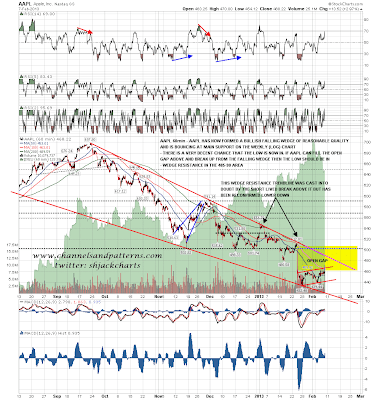 The action this week looks a lot like consolidation, though we may well still be seeing the formation of an interim top. What I would add to that though is that even on a break above 1511 ES resistance the potential upside today still looks limited, with a likely close then within three points of 1521 SPX. Until 1511 ES breaks it is strong resistance, and long entries here look brave, especially as I am now wondering whether a bullish rectangle is forming between 1495 and 1515 SPX. If a rectangle is forming I would expect at least one more test of range support before it would break upwards.