SPX and NDX made new all time highs on Friday, and the minimum requirement that we were looking for in the high that is forming here has been met. There is a setup for sharp retracement from here, though it’s very much still in the inflection point still, and I’ll be showing you on the last chart why I think the setup favors the bulls, though it could very much go either way.

On the SPX chart there is now a daily RSI 14 sell signal brewing, with NYMO divergence and SPX close to rising wedge resistance. SPX daily chart: 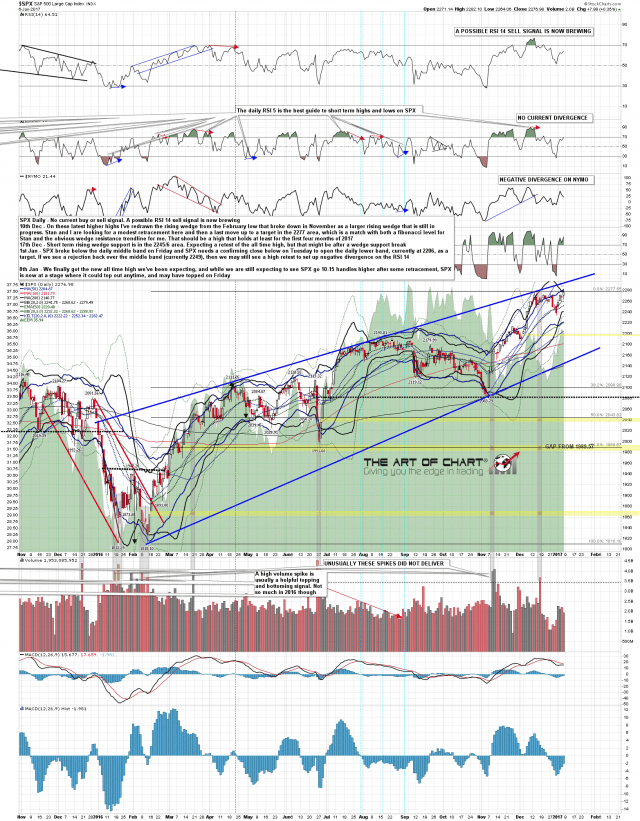 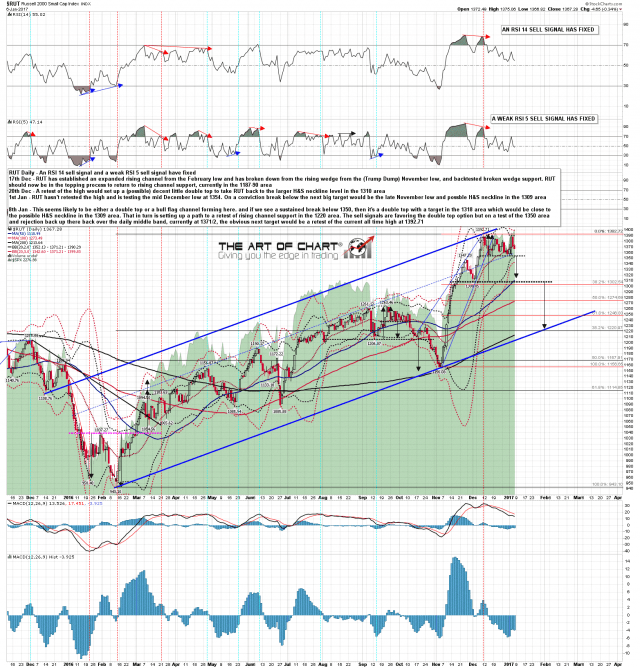 In my first post last week I was looking at the triangle on TF, which was the only decent shorter term pattern of ES, NQ & RUT at the time. That broke up, and has aggressively backtested into the triangle. If it goes a little lower and breaks the monthly pivot at 1352.50, then the break up last week was a false break and the triangle will likely break down, starting a move that might well deliver the 3.9% minimum down move that is still pending on SPX from a punch over the weekly upper band a few weeks ago. The RSI 14 sell signal would fix on SPX and we’d see a decent downmove, albeit one that might well still be part of this topping process.

On the other hand, if the monthly pivot support tested this morning holds, and the triangle follows through to the upside, then TF should at least fully retest the all time high and SPX would likely make a higher all time high as well. We’re considering possible targets up to 2300, as the rising wedge on SPX might overthrow bearishly. The short term pattern on TF within the triangle is a falling wedge, and these break up 70% of the time of course, so I think that gives the bulls an edge here for breaking the triangle up, though not a huge edge. We’ll see. TF Mar 60min chart:

On the bigger picture the inauguration is at the end of next week, and overall the equity indices may hold up until then. It’s been a while since we saw anything resembling a fast reversal at a big high on SPX. There’s not a lot of upside room on SPX/ES or RUT/TF, though there may well be more on NDX/NQ, which has made a new all time high again today.