Over Slope’s many years, I have done nearly twenty thousand posts on this blog. But among all those posts, I have never done any that even approached being “home improvement”. This is the first (and, probably, only) exception.

I have never been particularly handy. I’ve built many things over the years, including some pretty big projects (including laying down hardwood floor and building decks from scratch), but I’m not very good at it. I tend to “measure once, cut twice” and generally muck things up at some point, including things as simple as Ikea furniture. But my heart’s in the right place.

A couple of weeks ago, when one of my kids have a big slumber party here, it occurred to me that the deck was somewhat dangerous, because someone might trip on a deck in the dark. The deck in question is a huge, gorgeous thing (which I did not make………see above) made of an incredibly hard tropical wood named ipe. Try to drive a nail through it, and the nail will simply bend. This wood is almost like iron.

Anyway, an idea hit me………..that if I was somehow able to attach one of those LED rope lights to the underside of a step, it would illuminate it nicely without being intrusive. These are normally made for things like Christmas decorating, but I bought one with my little idea in mind. 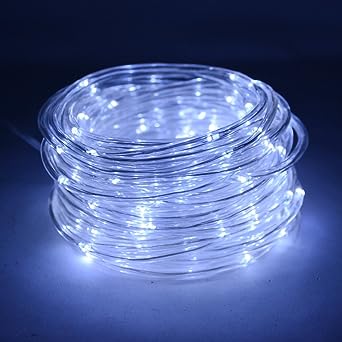 As I mentioned, you can’t really pound nails into this deck, making the use of the little plastic holders that came with the lights useless. So I did what every lazy slob does these days – – whipped out the hot glue gun – – and just hot-glued the damned thing to the underside of the deck. I was very pleased with the result………….. Viewed from the deck itself, you can see how it gently illuminates the steps and also helps light the yard with kind of an alpenglow. Anyway, for a budget of less than $50 and just an hour of my time, I was able to create a pretty nice improvement to our home. Just thought I’d share it.