We are only 18 trading days into the final quarter of the year, and part of me wants to close out everything, chalk up a profitable year, and be done with it. I honestly don’t think I’ve had such a powerful run in such a short span of time since, well, a decade ago. Going entirely into cash right now would take risk to zero and allow me to lock in all these fabulous profits.

Just look at how quickly things have become undone. That sliver of time on the right utterly unwound the long slog of gains shown in green. Sell-offs are swift and severe, aren’t they? 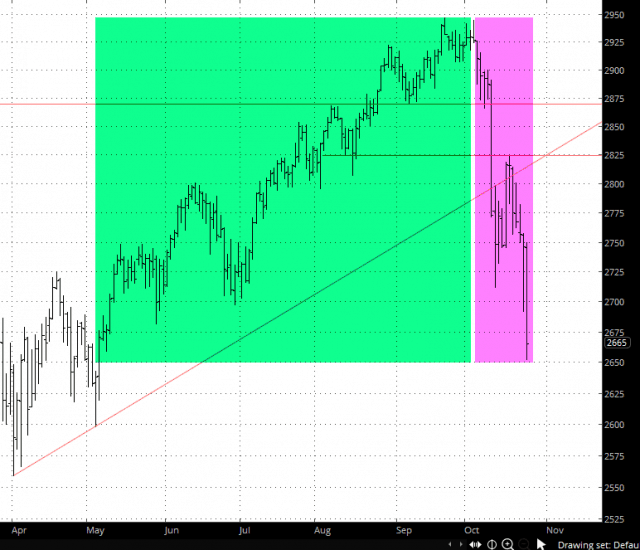 Of course, there are a couple of problems that leap to mind when considering the idea of calling the year “done.” First of all…..what would I do with myself? I mean, honestly, am  I supposed to binge-watch stuff on Netflix until 2019? And second, I’ve built Slope to be a place for ideas and discussion about the market. I can’t fake interest in the market if I’m out of it. So I’m kind of forced to stay engaged. Someone else will have to spend their time binge-watching.

I was chiding folks here on Slope for “bottom calling”, but listen, I’m scared to pieces about some big stick-save from our friends in the government. What if Powell buckled to all the harassment he’s getting from genius-boy and announced that interest rates would stay where they are for the foreseeable future? What if China and the U.S. announced some kind of big trade breakthrough? I feel like, more than ever, I’m looking over my shoulder for something to come along and wreck all this fun. This is just going far, far too well to sustain itself.

The thing is, the vast majority of so-called traders out there have never even SEEN a bear market before. They consider it their God-given right to have stocks rise endlessly. I look at /WSB every day to watch the clueless millennials chatter about their losses, and the rationale – – if you want to call it that – – for making decisions is simply laughable. For instance:

Umm……Electronic Arts. The maker of video game software. A “safe stock”. Sort of like a utility company or a Treasury bond, right? Hey, but at least this young man has done his due diligence with respect to fundamentals, right? They make “plenty of profit” and their financials are “great.” Oh, and Battlefield V comes out next month.

Anyway, I’ve got 80 shorts, every single one of them profitable, and I am mildly scared to pieces. The last ten years have banged into people’s heads that the government is on the side of the Bulls, never the Bears. Thus, I’m torn between absolutely zeroing out my portfolio and not having to worry or – – far worse – – watching the market go completely to hell without me in it.