Too many gold bugs are either still pimping the ‘inflation trade’ or digitally pleasuring other gold bugs with predictions based on inflation. From my favorite example of this behavior just yesterday (he of the “drop dead gorgeous bull wedge” for GDX that failed into a miserable bear market extension a few years ago). Just yesterday…

“I’ve announced a long term target for GDX of $15,000. That really isn’t very high… given the strong inflation numbers that I am projecting for America in the years ahead.”

I don’t use the guy’s name because he is not a big public figure like Dennis Gartman or Doug Casey. But he is highly visible within the gold err, “community” and he uses a lot of !!!!! when trying to hammer his points home to greedy gold bugs (the only kind, I assume, who take him seriously). Exclamation points are a sign of someone who really… really, I mean REALLY wants you to get their point!! (ha ha ha).

And there is always a current story to go with the reasons to buy gold stocks for a grand new era. For this guy it had been China/India growth and the “love trade” associated with both countries. Evidently now it’s morphed into something more US-centric.

“Gold stock enthusiasts need to watch Powell’s actions, because they are the catalysts that will push GDX above $26 and officially begin that fabulous era. Gamblers can buy call options on a two-day close over $26. I’ve urged long term investors to be aggressive buyers in my $23 – $18 tactical accumulation zone. The bottom line is that it’s the cusp of a new era for gold stock investors, and Powell officially launches it on March 21!“

My $23 – $18 tactical accumulation zone? My? Really? How about the accumulation zone of everybody who has seen the long consolidation from the 2016 up surge and can easily plot its highs and lows? That would be most people with a weekly or monthly chart.

No folks, the time to get excited about the gold sector is when the latest inflation falls apart. The liquidation can be painful for gold bugs as it would be for players of most categories. Mr. Powell could well be at the center of a next leg up in the miners but it would be amid failing economic signals and possibly even a deflation of the inflated assets of the post-2008 period. That would be the inflation rooted primarily in stocks and other risk assets that the Bernanke Fed put everyone into.

The gold sector could well lead a new ‘inflation trade’ one day, just as it did in Q4 2008 as it liquidated, bottomed first and led commodities, stocks and global asset manias of all stripes to this very day. But the ‘inflation trade’ we’ve got going now has been gauged as a little hysteria to go along with Amigo #2’s ride to the Continuum’s limiters, which was projected against the broad, inflation-fueled bull market’s manic phase. So far, so good.

But the gold sector will be special if/when the inflation fails, yields are limited and liquidity concerns hit the global landscape. Thus, these are a few of the gold ratios to follow in that regard…

Gold vs. Palladium (a counter-cyclical vs. a cyclical precious metal) was our cross reference indicator to the bullish Semi Equipment sector readings in 2013. It has been down trending during the inflated bull market, just as it should have been. The move above the SMA 50 is impressive but the trend only changes with a sustained move above the SMA 200 (black line) that eventually turns both MAs up.

Gold vs. Industrial Metals (incl. Copper) is more lame at this point. Gold is in a downtrend vs. the metals complex amid a minor inflationary phase, just as it should be. 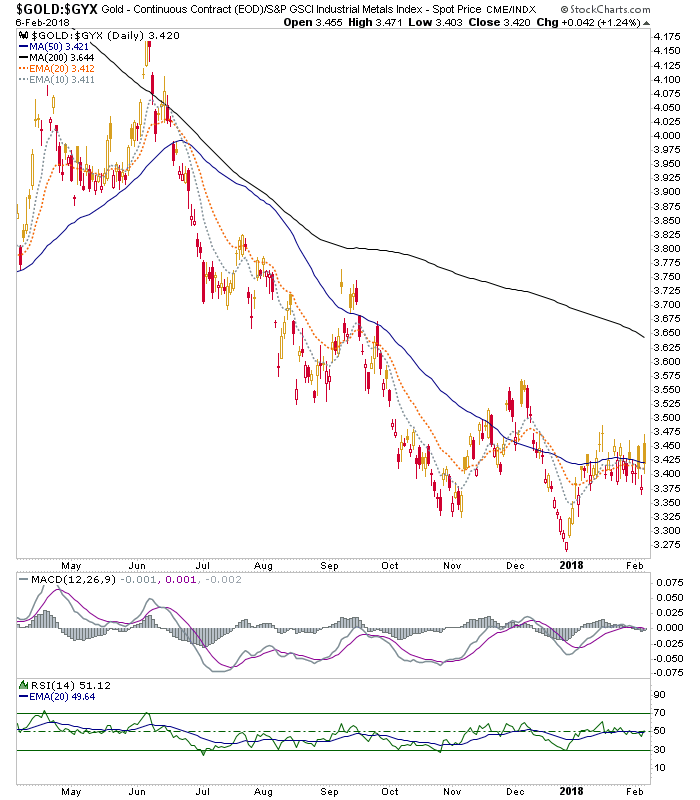 Gold vs. the Materials (stock) Sector (just for fun) exploded upward and got hammered half of the way back down on yesterday’s market reversal. It’s a downtrend and the point being that many of these materials inform the cost structures of mining operations, as they do most large scale industrial or infrastructure operations. 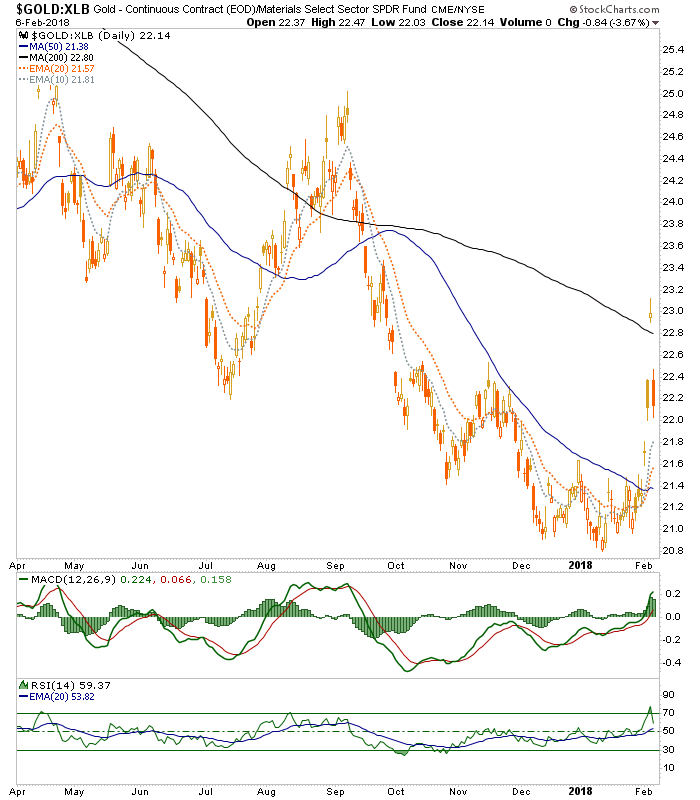 Gold vs. the Stock Market (as represented by the S&P 500). It’s none other than Amigo #1. The ratio rammed upward during the stock market’s fears over first interest rates (Amigo #2) and second, the uproar about some volatility products blowing up. But I’ll tell you what, if the market goes on to recover, Amigo #1 is going back to Pallookaville. 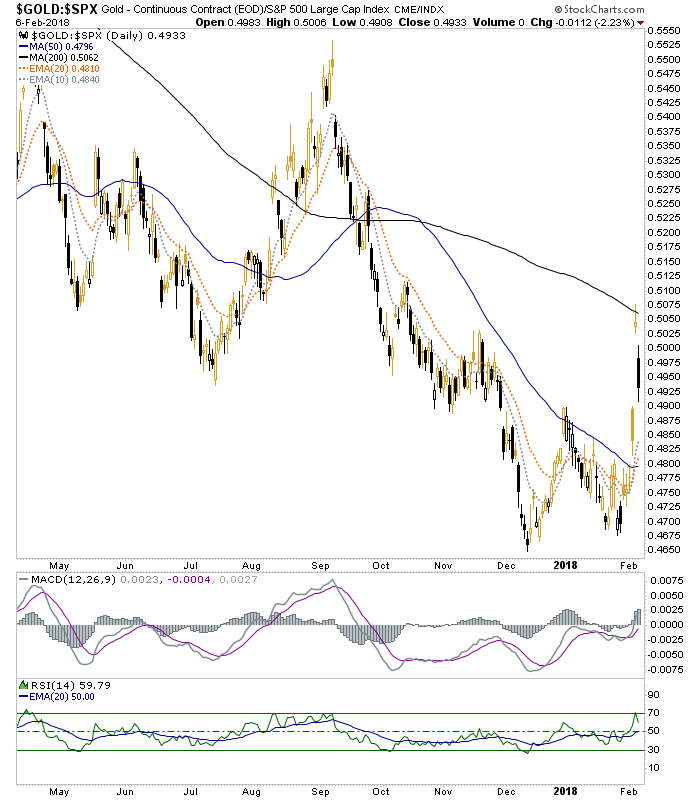 Finally, let’s take a look at an admittedly crude view of Gold vs. Financing Costs as noted earlier. Oh yeah, gold just loves rising long-term interest rates!!!!! Gold will eventually like a steeping yield curve (ah, there’s Amigo #3!!!!!) but I suspect it will steepen under pains of liquidity contraction as opposed to inflation. But we’ll see on that. 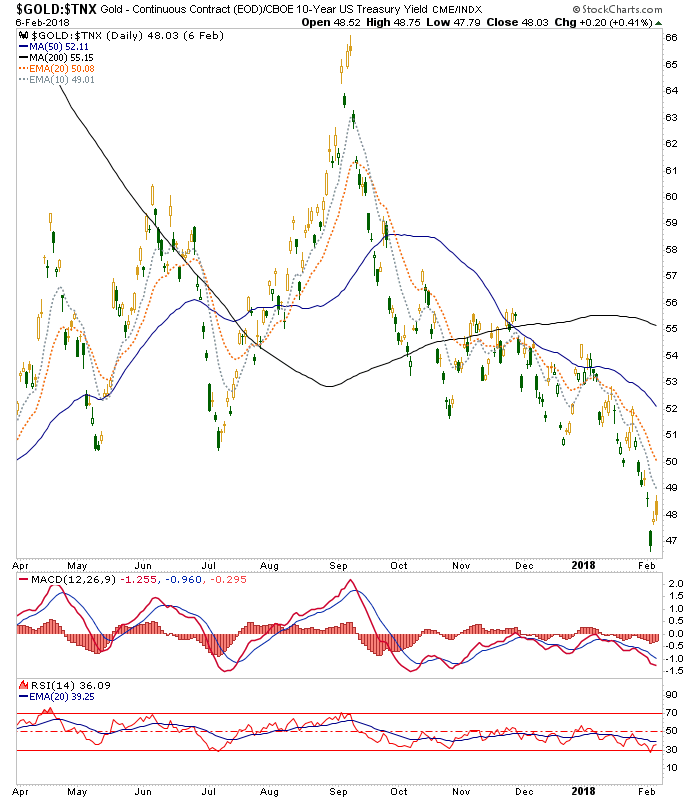 And that is the story folks. Gold, the relic of stability when things fall apart, will not be ready for prime time until it is ready for prime time. The reason that the pompoms wave non-stop and others obsess on the sector as if it is the only one in existence is that they desperately want you to find reason to be pro-gold. But it’s best to wait for the right reasons. Inflation promotion is not the right reason.