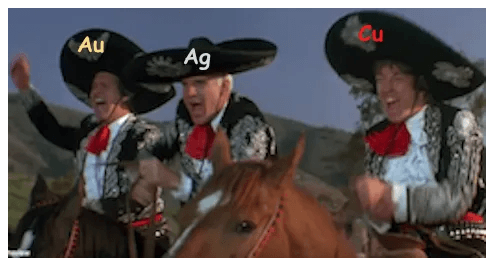 At the dawn of what is going to be a hyper-interesting year in the markets and in society, let’s see what the lovable and goofy Amigos have to say. As usual, we’ll use gold and silver daily charts and a copper daily along with a longer-term view with a weekly chart for the Economic Ph.D. metal.

The charts are the metals futures (click ’em for a larger, clear view), live when I clipped them a little while ago. The caveat with the metals as with macro markets in general is that it is still Santa silly season and so the signals are suspect to whatever degree you put weight on that.

Gold (counter-cyclical Amigo with a heavier anti-economy, liquidity haven utility) is reestablishing the daily chart uptrend by ticking a new high in an attempt to take out short-term resistance. The SMA 200 has been pointing up the whole time and has not hit my favored pullback point where it meets support. Oh well, that’s fine. Prepared is always a good thing to be. It is starting to get a little overbought but would be more so if it makes a new high, as is the technical objective of this breakout.

Silver (cross-dresser Amigo with more cyclical, commodity characteristics than gold) has taken out the next resistance level at 17.35 and turned it to short-term support. It’s dealing with some minor resistance here at around 18 and is also starting to get overbought. As with gold the major daily chart trend (SMA 200) is up and the pullback in the SMA 50 is moderating. The high 19s to the high 16s was some pretty good downside work but it too never touched the SMA 200.

Copper (cyclical Amigo carrying the hopes and dreams of a reflationary global macro) has furthered the big bounce during the Q4 inflation/reflation trade. It hit the next level of resistance and is pulling back from it this morning after also getting somewhat overbought. 2.75 is the test that bulls want to see hold up.

The weekly is just the usual reminder that as of now it’s just a bounce… in Doctor Copper, in commodities and resources and in the global macro reflation trades. The $3/lb. level is a key one but a major bull market is not indicated unless it takes out the 2018 high. Of course, by then a lot of base metals miners would probably be screaming upward. For now, current resistance at around 2.85 is pretty important, wouldn’t you say?