It is time to revisit with Mr. Exeter. He created a risk pyramid, that shows how investors cascade down from high risk to no risk assets as aversion and default gains steam. 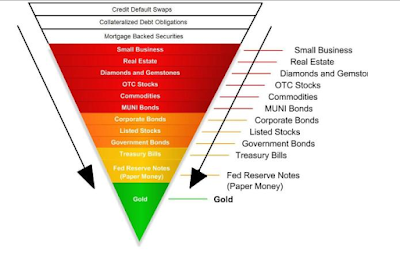 In 2008, basically the derivative market imploded, and the Central Banks around the world applied monetary adrenaline to revive the economy, but all it did was add more debt, and soon after we started to see the risk aversion train begin anew, this time in a classic way.

We are now at the bottom tier of the pyramid.  The U.S. stock market is beginning to swing violently between off shore assets seeking yield enter our markets, to folks realizing growth is faltering and deflation is coming from China and falling oil and bailing out.  Until now, these deflationary waves would force down gold, and bid bonds, but not this time.

Gold, U.S. bonds, and U.S. dollars are being bid as they are relatively scarce from a global point of view.  Let me explain.  There is over $9 trillion in debt denominated in dollars, as the dollar rises, these debts become untenable and causes a dollar shortage which then starts a feedback loop as investors scramble for dollars to hedge their dollar credit loans.  The same for U.S. bonds, 20% of the world GDP charges you to accept their bonds, additionally China, another 30% of GDP has a currency collapse on their hand and a opaque economy, so who wants their bonds.  Thus leaving the U.S. bond market as king, with yield, and a rising currency.

The paper gold market has a very large derivative short, and the other side was long the stock market. Well oops, the stock market trade is now being unwound and gold short positions are, as well.  Plus everywhere else in the world is scrambling for gold now that the banking systems are failing to provide yield or safety. Also, the world said uh oh when the Fed raised rates, dooming their economies. Ergo gold starts to rise that week. 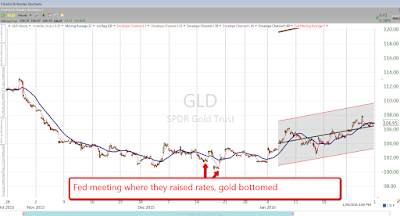 When our bond market starts to fail, katy bar the door on the price of gold.  To the moon.  But, I think that is a few years off though.  The stock market will falter first, and that is in process.

You have been warned.  🙂  Do something about it.