From his meditation retreats in the country formerly known as Burma, to his Rasputin-like appearance in Congressional testimony, Twitter (TWTR) and Square (SQ) CEO Jack Dorsey cuts an eccentric figure. Given that, you might think to dismiss his recent auction of the NFT (Non-Fungible Token) of his first tweet as another eccentricity.

Image via Valuables by Cent.

What if it isn’t?

I Am The Louvre

To explain the logic behind NFTs, we turn to Albert Wenger, managing partner of Union Square Ventures. As we mentioned when we interviewed him a few years back, by some measures, Union Square Ventures is the top performing venture capital firm in the world. Notably, it was also an early investor in Twitter. In a post over the weekend (A Word On NFTs), Dr. Wenger offered a thought experiment. Imagine a future where you could scan the Mona Lisa that’s hanging in the Louvre, and then 3-D print an exact duplicate in your home.

Do you now own the Mona Lisa? No, you have a copy of it. Even though your copy is now identical to the original. Imagine for a moment trying to sell it.

You: I am selling the Mona Lisa

Buyer: You mean the one that’s hanging in the Louvre?

As long as a buyer can easily call up the Louvre and ask them if they still have the Mona Lisa and they can credibly assert that they do, your copy will be worth very little.

Wenger then extends the thought experiment: what if someone switched your exact replica with the one in the Louvre? You’d have the same problem trying to sell it. He concludes:

This is what NFTs do for digital content. They let someone assert “I am the Louvre” (for that piece of content).

This is not a fad. It is a fundamental and profound innovation. And one that I and others had envisaged a long time ago.

A Picks & Shovels Play On NFTs

The old cliché about the gold rush was that the businesses selling picks and shovels to the gold miners were the ones who made the most money on it. So what’s a picks & shovels play on NFTs? Consider Square. W.E. Deming, noting Square’s recent acquisition of the Norwegian music streaming service Tidal, suggested Jack Dorsey would use NFTs to differentiate Tidal from streaming competitors such as Apple (AAPL) and Spotify (SPOT).

Every trading day, our system analyzes every stock and ETF with options traded on it in the U.S., based on their past total returns and forward-looking options market sentiment on them. It then ranks the ones that pass its initial screens by their potential returns over the next six months, net of their hedging costs. Square first made the top ten names of our ranking in October of 2017.

Square was one of our top ten names again on Friday.

In Case We’re Wrong About Square

In case we’re wrong about Square over the next six months, here are a couple of ways you can hold it while strictly limiting your downside risk.

As of Friday’s close, these were the optimal puts to hedge 200 shares of SQ against a greater-than-18% drop by mid-September. 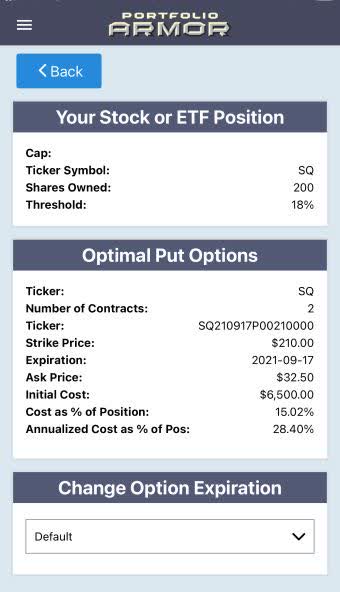 The cost there was $6,500, or 15.02% of position value (calculated conservatively, at the ask; in practice, you can often buy and sell options at some price between the bid and ask). If you don’t want to pay that much to hedge, you can scan for hedges at closer expiration dates, or scan for an optimal collar. Here’s an example of an optimal collar on Square

If you were willing to cap your possible upside at 24% by mid-September, this was the optimal collar to hedge 200 shares of SQ against a >18% drop by then. 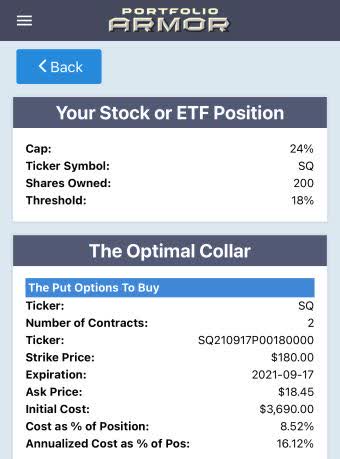 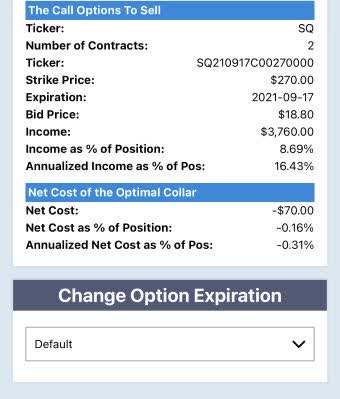 This time, the net cost was negative, meaning you would have collected a $70 net credit when opening the hedge. That cost assumes, to be conservative, that you placed both trades (buying the puts and selling the calls) at the worst ends of their respective spreads.

https://slopeofhope.com/2021/03/what-if-nfts-arent-a-bubble.html
What If NFTs Aren’t A Bubble?