Another difference between the two is that social data analysis supports our current bullishness on Peloton.

Social Data Is Still Bullish On Peloton Too

Our friends at LikeFolio look at social media mentions of sentiment and purchase intent regarding consumer brands. They use that to forecast sales for companies behind the brands. LikeFolio’s most recent email alert on Peloton, screen captured below, suggested Wall Street may be underestimating the company’s post-COVID prospects.

What If You Bought Peloton Near Its Peak?

When Peloton shares were above $160, we suggested longs lock in some gains by hedging. Since then, the shares have dropped 31%.

Let’s look back at the hedges we presented then, and see how they’ve ameliorated the drop so far.

On December 22nd, this was the optimal put option contract to hedge 200 shares of Peloton against a >25% drop by mid-June.

Screen capture via the Portfolio Armor.

Note that the cost of the put protection was fairly high: $4,770 or 14.79% of position value (the app calculated it conservatively, using the ask price of the puts).

Let’s look at how that hedge has reacted to the 31% drop.

How The Optimal Put Hedge Has Reacted

Here’s an updated quote on those puts as of Friday’s close (via CBOE):

If you were willing to cap your upside at 30% over the same time frame, this was the optimal collar we presented in December to hedge your PTON shares against a >25% decline by mid-June. 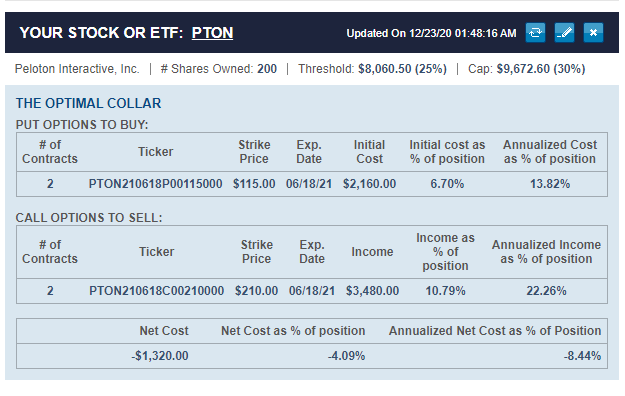 Here the cost was negative, meaning you would have collected a net credit of $1,320, or 4.09% of position value, assuming, to be conservative, that you placed both trades at the worst ends of their respective spreads (i.e., buying the calls at the ask and selling the calls at the bid).

How That Optimal Collar Hedge Has Reacted

Below is an updated quote on the put leg of the collar (note that it’s at a different strike than the first hedge):

And here’s an updated quote on the call leg:

More Protection Than Promised In Both Cases

Although Peloton had dropped by more than 31% from December 23rd to March 12th and both hedges were designed to protect against a >25% drop, the optimal put hedged position was only down 19% and the optimal collar hedged position was down 17.6%. In both cases, the time value of the put options gave a bit more protection than promised since the hedges were structured to protect based on intrinsic value alone.

That’s up to you, and it will probably depend on whether you agree with Likefolio’s and our current bullishness on Peloton. The nice thing about being hedged though, is that it gives you options (no pun intended). A hedged shareholder doesn’t have to worry so much about how much further Peloton might drop because his downside is strictly limited. You can exit now, for a smaller loss; you can buy-to-close the call leg of your collar to remove your upside cap if you’re bullish; and if you’re even more bullish, you can sell your appreciated puts and buy more Peloton shares. In any case, you have breathing room to let the dust settle and decide on your best course of action, without the anxiety of an unhedged investor.