Nvidia (NVDA) was the #2 name in our daily ranking on Tuesday, behind only Generac (GNRC) which we mentioned in the update to our previous post (Is South Africa’s Present America’s Future?). It’s not the first time Nvidia has been one of our top names.

Our system was bullish on Nvidia when it traded at $27.33, as you can see in the hedged portfolio included in this article in January of 2016.

A Top Name This Spring

More recently, Nvidia was one of our top ten names on April 29th of this year.

Since then, Nvidia is up 32%, sandwiched between the oil producer Laredo Petroleum (LPI) and the iron miner Cleveland-Cliffs (CLF).

We’re bullish on it again, but below are a couple of ways you can hedge your bets in case we end up being wrong about it this time.

Hedging Your Bets On Nvidia

Let’s say you buy 100 shares of Nvidia, but you’re unwilling to risk a drop of more than 24% over the next six months, and you want to find the least expensive ways to hedge it while allowing the most possible upside. Here are two approaches to that.

As of Tuesday’s close, this was the optimal, or least expensive put option hedge to protect against a >24% decline in NVDA by late January.

This and the subsequent screen captures are via the Portfolio Armor iPhone app.

Here, the cost was $3,335, or 4.12% of position value, assuming, to be conservative, that you bought the puts at the ask price (in practice, you can often buy and sell options at some price between the bid and ask).

If you were willing to cap your possible upside at 30% by January 21st, this was the optimal collar to protect against a >24% decline over the same time frame. 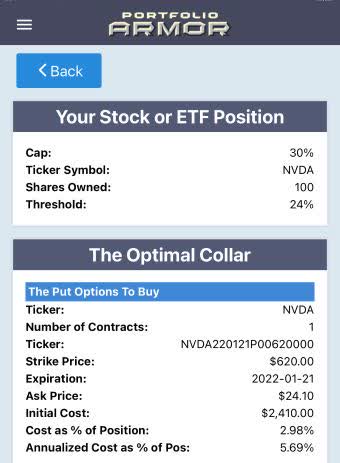 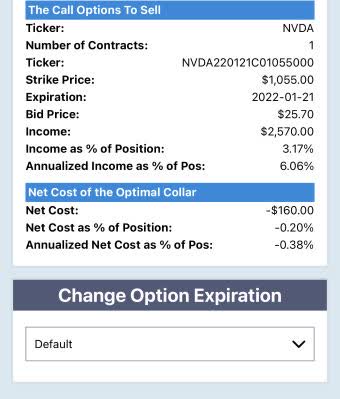 Here the net cost was negative, meaning you would have collected a net credit of $160 when opening this hedge, assuming, again to be conservative, that you placed both trades at the worst ends of their respective spreads (buying the puts at the ask and selling the calls at the bid).