That was a strong reversal day yesterday and that was an encouraging start. There haven't been two consecutive down closes in October so far and we'll see if that can be broken today. On the big picture the reversal at main resistance yesterday was very encouraging for the bear side. On ES (though not on SPX) there was a bearish engulfing candlestick and a potentially very bearish setup that I've detailed on the daily chart:

There were nice double-top daily candles on NQ and TF as well, though neither showed a bearish engulfing daily candlestick. NQ has been the strongest of the three and there's no particularly interesting bearish setup there, though on TF, the weakest of the three, there is a reversal at important resistance and possibly the top of a right shoulder of a huge potential H&S that I posted a few weeks ago. Details on the chart again:

It's a bit too early to get excited about these though as the key for bears here is to reach the very strong support level (and potential H&S neckline) on ES at 1185. There was a promising development yesterday that might deliver that though. I posted a SPY 15min chart on twitter intraday showing a trendline break that should deliver more downside, and SPY reached (give or take) my first target, which is the potential H&S neckline that would target that main support level below. I'll be watching to see how that develops today, and here's the updated SPY 15min chart: 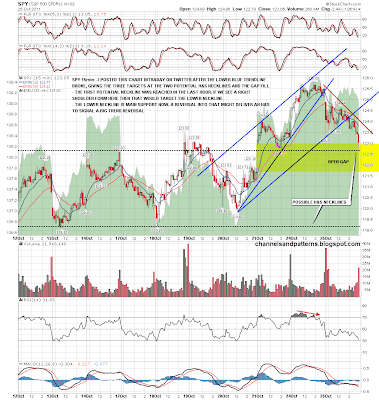 Looking across related markets this morning there's nothing that looks really encouraging on the bear side. EURUSD is still holding the 1.39 support level, though stalled at resistance in the 1.394/5 area. Given the importance of EURUSD on this run up, the bears really need to see some weakness on EURUSD soon: 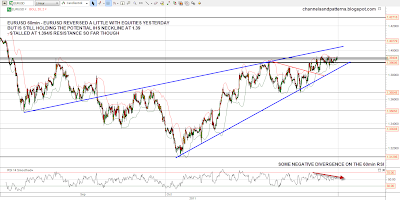 Copper has actually made a new high for October overnight, though since the low it has still obviously been strongly negatively divergent relative to SPX: 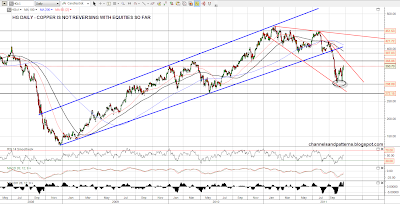 30yr Treasury futures have bounced a bit and made a higher low,which is a  start. Still essentially in a consolidation range though: 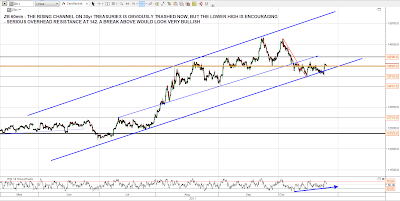 Vix rose sharply yesterday and has also made a higher low. So far the move has only backtested the broken bear flag though and obviously a larger move to fill the open gap just above would be more encouraging: 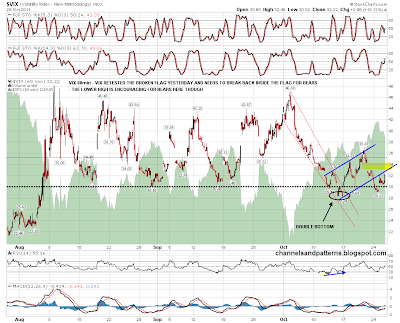 The last two charts are only weakly correlated and they are the gold and silver charts, which I haven't posted much in recent weeks as not much has been happening. That changed yesterday, when gold broke above serious resistance at the double top base and looks ready to move higher: 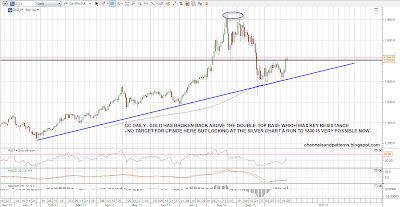 That fits with my big declining channel on silver, which I posted at the silver low and a few times since. Silver is still testing big resistance in the 33.6 area, but the break up on gold looks encouraging, and if silver breaks up too then the path is clear to test the next resistance level up at 36.9, and then too run to the top of the channell in the 40 area: 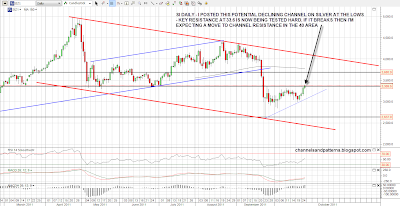 I'm still skeptical about yesterday's reversal developing into something larger, but it's an encouraging start. For today I'm watching the rising support trendline from yesterday's low on the ES 5min chart, currently slightly over 1230. If that breaks down then I'd expect at least a test of yesterday's low today. Worth remembering though that if an H&S right shoulder is forming on the SPY 15min, then it would take much of the mornng to form and that there is a LOT of news today. The Gap Guy say the odds are decent today for a gap fill by the end of the day.