As shown on the Weekly charts and the percentage gained/lost graph below of the Major Indices, the Dow Utilities gained the most, followed by the Nasdaq 100, Russell 2000, S&P 500, Dow Transports, and Dow 30 this past week. 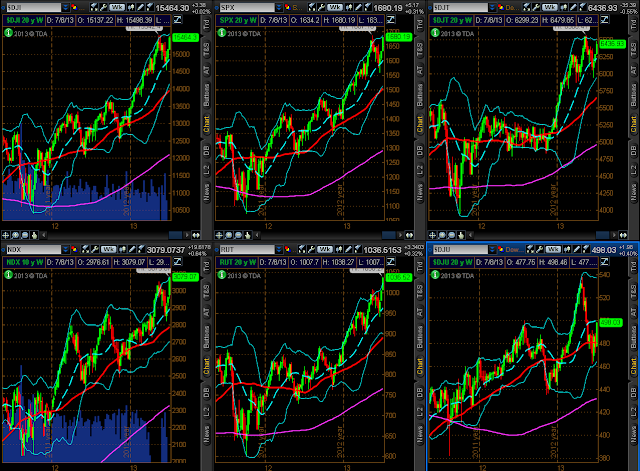 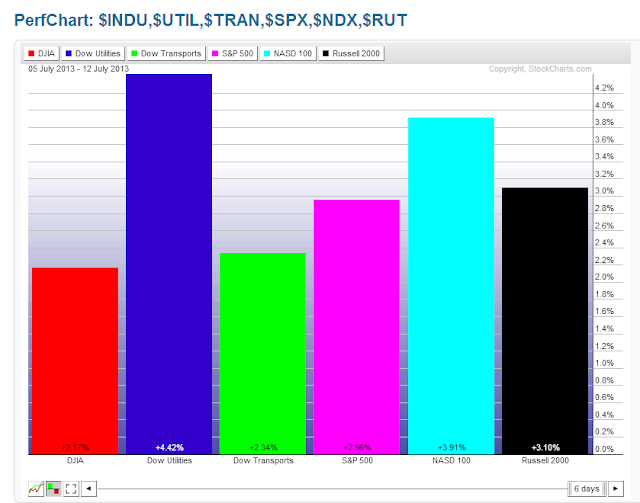 As shown on the Weekly charts and the percentage gained/lost graph of the Major Sectors, the largest gains were made in Utilities, followed by Consumer Staples, Health Care, Materials, Cyclicals, Financials, Industrials, Energy, and Technology.

It was a “risk-on” week, but slightly favouring the Defensive sectors. 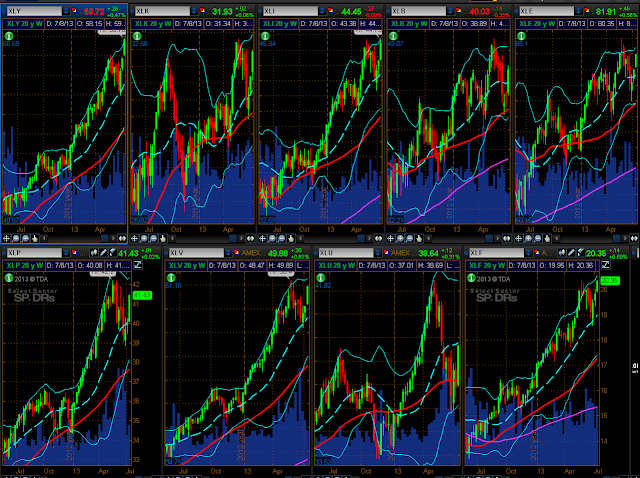 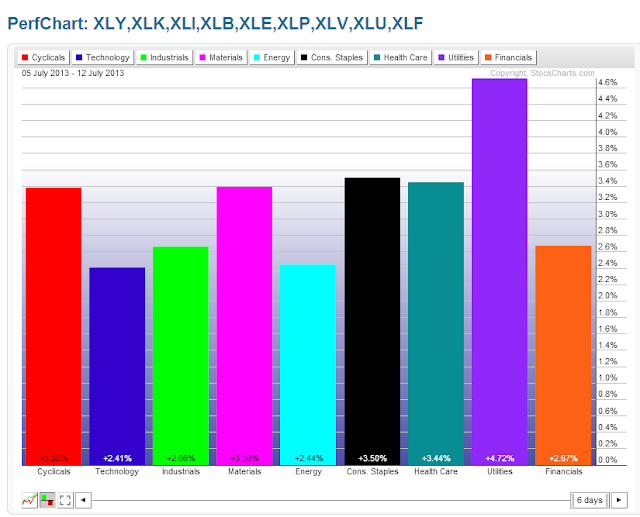 As I mentioned in my last weekly market update, I was looking for any advance above the middle of an uptrending channel from the November 2012 lows to occur on higher volumes.

You can see from the Weekly charts below that this week’s advance (along with the prior week) occurred on lower volumes. While the YM, ES, NQ & TF are now above the middle of their respective channels, I’d like to see higher volumes take any further move higher. However, if the major moves continue to occur on overnight low volumes, we may not see higher weekly volumes appear.

Since the NQ & TF are nearing the top of their channels, we may see any further upside momentum slow down soon and profit-taking begin to occur.

Japan’s Nikkei is lagging…whether it recovers to its prior highs remains to be seen. 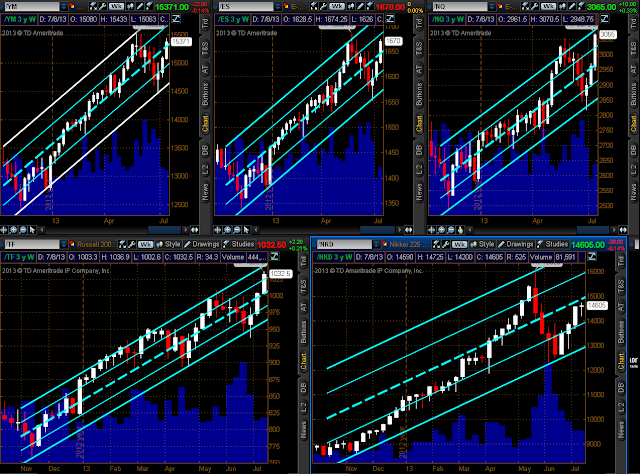 I first introduced this grouping in my last weekly market update in order to compare any further rise in Treasury yields with consumer products and services.

As shown on the following Daily charts and the percentage gained/lost graph of this group, you can see that while the 10-Year yields dropped over the past week, gains were made in the rest, with Homebuilders gaining the most, followed by Gasoline, Food Retailers/Wholesalers, Lumber, S&P 500, Financials, Copper, Oil, and GE.

Risk was added as yields dropped…we’ll see if that continues, or what happens to these instruments if yields begin to climb again.

Also worth watching in the days/weeks going forward is the JNK:TNX ratio, as I last discussed on July 10th as a gauge of risk-appetite in the face of rising treasury yields. 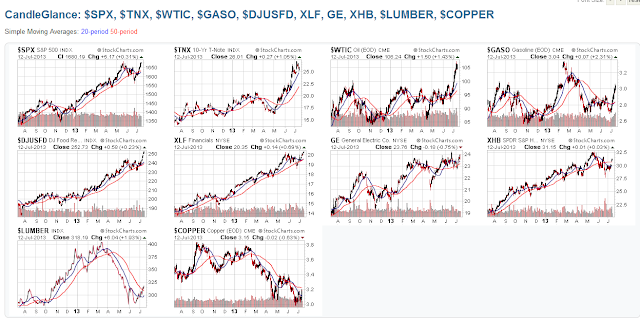 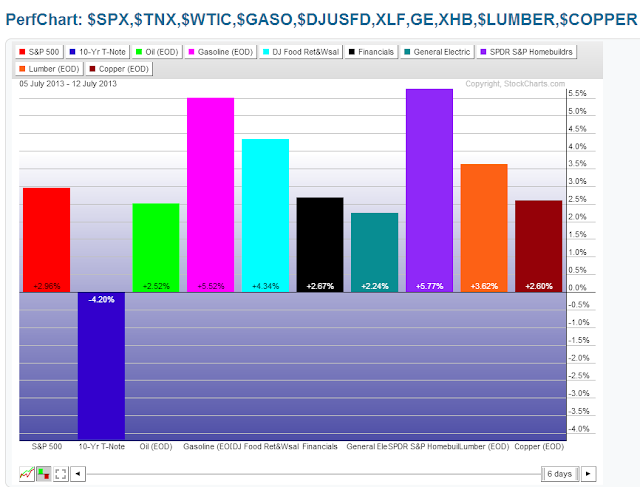 The following 5-Year Daily charts of the percentage of stocks above 20-50-200-day moving averages show that, in the short term, stocks above their 20-day MA are at a major resistance level. As such, and co-incidental with my comments above related to the NQ & TF, we may see profit-taking occur soon.

In the medium term, stocks above their 50-day MA still have a short distance to travel before they are at major resistance.

In the longer term, stocks above their 200-day MA are nearing their major resistance level. 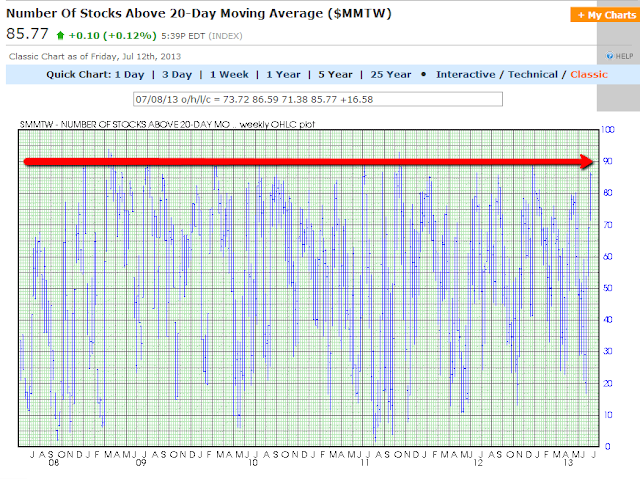 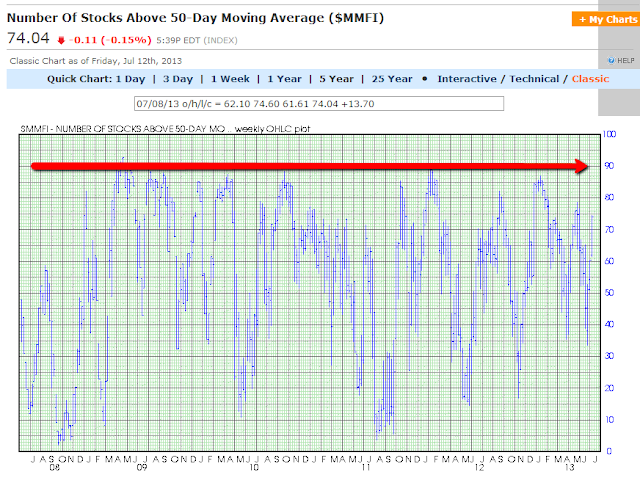 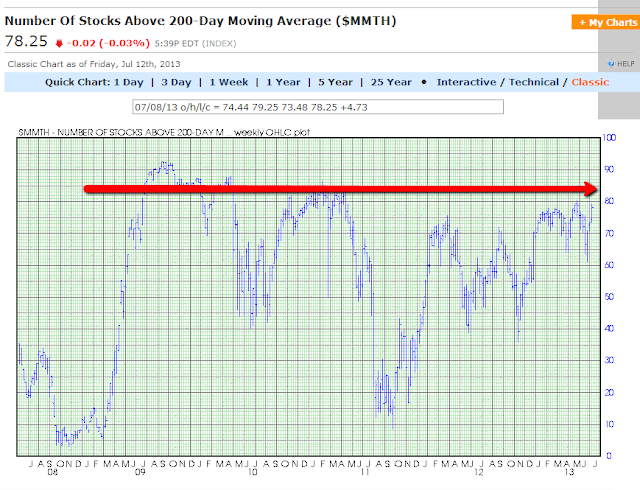 I wrote about the potential for another technology bubble brewing on October 16, 2012. I mentioned that there had been two bubbles followed by swift and deep declines from 2000. Shortly after my post, the NDX pulled back somewhat, but has resumed its climb and now sits at a former resistance level established in 2000 before it continued its meteoric plunge from Bubble No. 1 to the 2002 lows.

The SPX is just above its second bubble’s resistance level.

The spread between the NDX and the SPX continues to widen. We’ll see how long Technology continues its climb this time before succumbing to the “Laws of Gravity” (and the “Laws of Bubbles”). 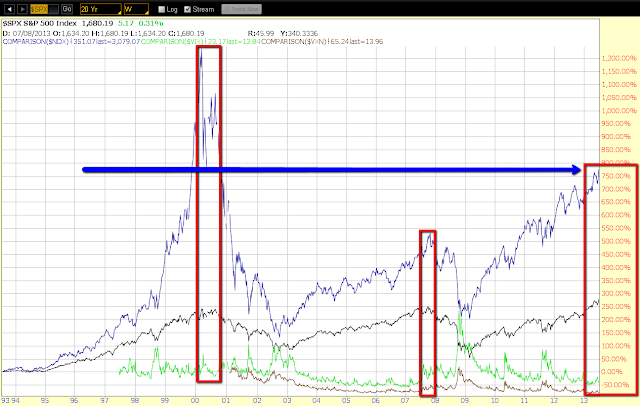 Next week, we’ll see the release of the Beige Book report on Wednesday and the expiration of monthly options on Friday. As well, Ben Bernanke testifies before the House Financial Services Committee on Wednesday and before the Senate Banking Committee on Thursday.  As such, we may see more overnight and intraday larger swings and volatility enter the markets. Furthermore, we may see more volatile swings in the Shanghai Index and the Aussie $, as I wrote about on July 11th, as traders react to a whole slew of economic data to be released on Sunday, Monday, and Tuesday concerning China. Any further weakness in Japan’s Nikkei may have a negative impact on the Shanghai Index and the Aussie $, or vice versa. Furthermore, traders may position themselves (in anticipation of any major policy decisions) ahead of the G20 meetings, which take place on Friday and Saturday. It should be an “interesting” week.

Have a great weekend and good luck next week.