Hi Slopesters… Gary from biiwii posting after reading that Tim is going short the GLD.

I realize that gold has spent much of Hope '09 / Full Tout '09 running with the positively correlated stuff.  But on a relative basis to all the pumped up games, gold is counter-cyclical.  Therefore, I would prefer to short the real precious metals wild man, silver.

Here is a chart that simply takes the Gold-Silver ratio (GSR) I showed last week, and flips it over.  Silver has not got much room to run here in relation to gold if the red resistance line holds true.  Silver, unlike gold is very much of positive correlation to the mini speculative mania that I believe is in a process of flaming out.

On a risk/reward and technical basis, I like gold over silver.  On a fundamental basis (only one of them is an ancient tie to monetary value – oops, sorry… gold bug moment 🙂 I really like gold over silver.  This would come into play for gold stock holders who would like to hedge positions. In my case, the 2x silver short ZSL might be a good hedge against the 2x gold long UGL I bought yesterday per this post along with some gold stocks that I have decided to hold, come hell or high water.

So, my point here is not to boost or pump gold but rather to point out a relative short opportunity that looks better to me, and has a more positive correlation to gold stocks and the broad markets to boot.  ZSL is the only short position I dumped into yesterday's downside, and I would like to see that resistance line approached once again.  Then, I think silver could be a compelling short – relative to gold and likely, in its own nominal terms as well.

Silver moves like a madman, in both directions.  If you are not sure about it, stay away from it. This is not a recommendation.  Just a note that I have used ZSL and will likely do so again in guarding my portfolios.  If we truly have a resumption of the bear market, silver is going to plummet relative to gold.

I would like to propose a solution to the multiple systemic problems now facing the United States. A solution so far, not discussed. Since this country de-pegged from gold in August of 1971, we have been on a long road to bankruptcy.The “dollar”, as the world’s reserve currency has been progressively abused by imprudent fiscal and monetary policy. The debt burden imposed by this on government from the national to the local level is intolerable and will never be repaid. The debt burden that the citizenry toils under is even more intolerable.

Solution: Declare ALL debt both public and private null and void. Complete the bankruptcy proceedings started nearly 38 long years ago.

Why not? The Chinese did that in 1949. The Russians have done it twice and Argentina does that every few years whether they need to or not. Means that no state government, county government or city government any longer has any debt. The downside: raises the question of moral hazard. Prudent individuals who did not take on debt would get no direct benefit. Also, lenders, both institutional and individual would be wiped out. But think of the upside, even for those prudent individuals who did not directly benefit from debt relief. Onerous tax burdens would be lifted.

As a bankrupt, we would be back to cash and carry. Only see upside from that. This country in a very short period of time, became the industrial engine of the world. A feat unsurpassed in history as this country became the envy of the planet. ALL done without ONE credit card or one HELOC.

Of course, there would be no money left as all “dollars” in existence (other than in coin collections!) are created out of debt. No real problem there, either. The US Mint holds in excess of 250,000,000 ounces of gold. That gold belongs to the people of this country, confiscated from them in 1933. This does NOT count any gold that may or may not belong to the people located in Ft. Knox (no audit there since President Eisenhower) or the gold “lent” to the Federal Reserve.

M Zero (currency and coin in circulation) and M1 (demand accounts) would be backed by said gold belonging to the people. To ensure on going monetary and fiscal discipline, said gold currency, issued by the US Treasury, would be freely redeemable in gold specie at the conversion rate established based on the amount of gold vs. M zero and M1. Then this country could get back to work creating REAL wealth which is the production of goods and services that people want and need.

Just an idea. What do you think?

I use price alerts across a wide spectrum of non index stocks to show me whats happening outside the manipulated or at least suspect dow naz and spy. Yesterday several of them tripped and the shadow world beneath the dow started to panic.

Lets look at a fine example of the non index backroom hopefuls.

BSDM – The story in a nutshell. They have some kind of awesome phaser that shoots a hot anti cancer death ray. Wow. What do they really do? Who cares. The point is they released a headline on September 22nd that states:

A Phase III study, which utilized the BSD-2000 Hyperthermia System, demonstrated that patients with high risk soft-tissue sarcomas were 30% more likely to be alive and cancer free almost three years after starting treatment if targeted heat therapy (hyperthermia) was added to their chemotherapy treatment.

Good enough for blind optimism to pile in. Never mind the fact that the company has been releasing the same headline since the 1980's. Lets look at what happened next: 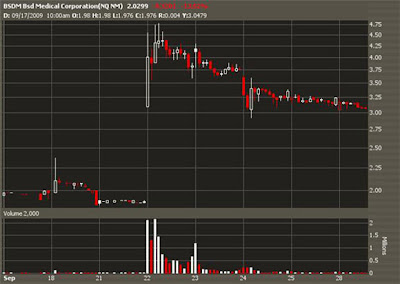 Solid! Pretty exciting pop but look closer at the filing and what do you see? 3% institutional ownership. Dimensional Fund Advisors is the largest institutional owner with 466,864 shares. This safely identifies BSDM as a probable valueless stock (which i think comprises about 96% of the stock market but thats another post) and is therefore only good in a bullish era or in the unlikely event their technology becomes viable.

The illusion of value is only sustainable when the market is absorbing optimism in the form of hopeful capital.

The stock pulled back as it should but what happened to it this week: 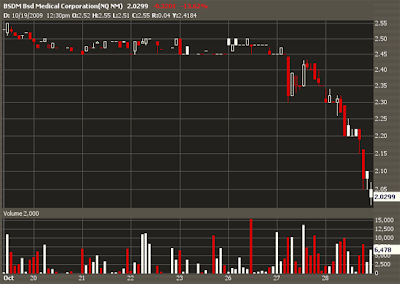 It fell off the line it had formed in the 2.50ish area and is now trading at its pre pop anti cancer headline share price. BSDM and all its ilk are probable canaries for the market at large and should warrant attention.

I am a closet admirer of the Bear Masters here as I do not short stocks. I always play long no matter what (except for extreme events) because I believe real value is a rarity, therefore stocks are kept high on an illusion and magic is far more powerful than reality. Reality is what sends stocks down and I am terrible with reality.

Earnings gaps have been strong against market headwinds as of late and the first hour scalps have been superb. Look at NTRI and PEET yesterday. Most of the time I don't know what I am going to scalp until after the open when my screener data kicks in but today so far my pre open list has MOT (droid release) and AKAM (strong name post earnings play).

Karl Denninger of The Market Ticker was kind enough to spend an hour with me Tuesday night.  This is the first of six installments.  For more information on Mr. Denninger, visit his website for macroeconomic commentary, and his forum for a trading-centered experience.