NOTE: I neglected to put up this post, which Jack wrote five hours ago; definitely an oversight on my part; my apologies!! – Tim

I was watching for one of the last bear market indicators to trigger at the close last week, and that was a close below the monthly 20 SMA on SPX. SPX closed a long way below this and the history of the last two bull markets suggests that we can expect no more than a retest of this trendline before the next cyclical bull market has begun. I've added the bollinger bands to this chart as a touch of the lower monthly bollinger band would generally be a minimum bear market target and so it's worth noting therefore that the lower bollinger band is currently in the 1000 area: 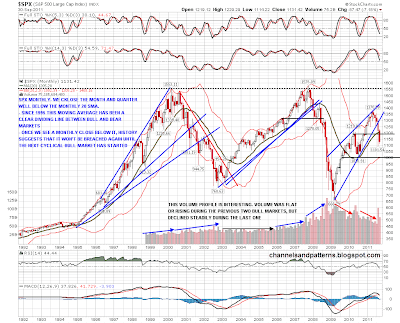 In the short term I'm seeing no sign of an imminent reversal. I've been finding the 30min RSI on SPX an excellent indicator in recent weeks to show when a move is topping or bottoming out and there's no sign of that at the moment. SPX also lost the important 1135-40 support area near the close last week so SPX is definitely looking lower: 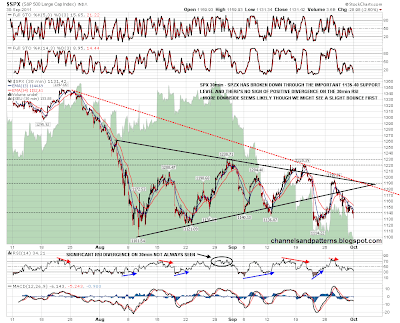 Overall the technical picture on the markets generally is looking steadily worse, and is somewhat reminiscent of the picture in August 2008. It is too early to hunt for bargains in my view though there are some stocks that are already reaching attractively bombed out levels. The leading indicators however are firmly pointed down, with copper leading the move. Copper futures have been testing the 300 level overnight, and there is some support there and at 293. Bigger and more interesting support however is in the 273 area and that is where I think we could see the next swing low. Generally that low on copper would precede a swing low on SPX  by enough time to develop positive divergence:

EURUSD has lost the 1.34 area on the daily chart and of the other USD pairs AUDUSD is losing the 96.8 level which backs up a move lower on EURUSD. I have my eye on the 1.291 area as a candidate swing low on EURUSD with decent support and another potential H&S neckline there: 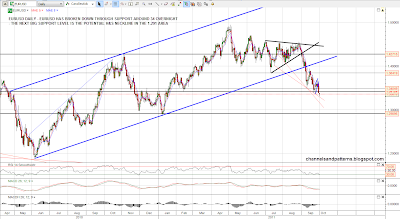 Oil futures have returned to retest strong trendline support in the 77.50 area overnight and that is a low that might potentially hold a while. If it breaks down from there I'd expect a fast move into the 60s:

I was talking on Friday morning about the technically elegant, though tricky to trade, IHS reversal pattern on 30yr treasury futures. As I expected that broke up, retested, and is on the way to the IHS target at 144'15, having also formed a rising channel from the low last week that I've marked on the chart. This setup is arguing for no more than a modest bounce on equities today if we see a bounce at all:

The last chart for today is a very interesting chart on VXN, the Nasdaq Volatility Index, which jonny at BCB suggested I look at over the weekend. Very nice setup there with a descending triangle breaking up with a target in the 58 area. Obviously this isn't a tradable instrument and the target may not be reliable, but for what it's worth it is arguing strongly for a powerful move down on equities soon: 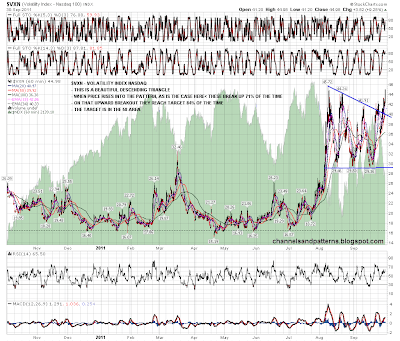 Overall this setup looks very bearish and gives the overall impression that equities are looking for a trigger to start another big downside move. We don't have to look far to see potential triggers for that move from Europe but the domestic picture in the US is also darkening steadily. An interview with Lakshman Achuthan, co-founder of the Economic Cycle Research Institute on Bloomberg last Friday, in which he argues that the leading indicators in the US now argue strongly that a new recession is starting, was thought-provoking and if you want to see that you can see it here.