Checking Slope for recent mentions of Intel, I found this post from NFTRH back in January (“Stock Market: A Big Picture View”), where he made the point that semiconductor companies such as Intel were canaries in the economic coal mine. If that’s the case, and if the Fed ever tightens again, then chip stocks could feel the heat first. In any event, for Intel longs looking to add some downside protection, here are a couple of ways to do so.

As of Wednesday’s close, these were the optimal puts* to hedge 1000 shares of INTC against a greater-than-20% drop over the next several months. 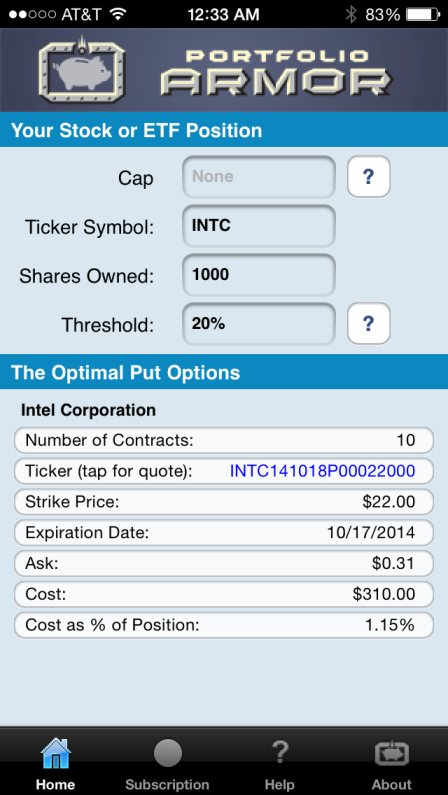 As you can see at the bottom of the screen capture above, the cost of this protection, as a percentage of position value, was 1.15%.

Intel was relatively cheap to hedge with puts, presumably because option market participants don’t think there’s a high chance of it tanking over the next several months. But they don’t seem to think there’s a high chance of it skyrocketing over the next several months either, which is why you’d need to cap your upside at 10% to fully offset the cost of hedging it against a greater-than-20% decline over the same time frame. If you were willing to make that tradeoff, this was the optimal collar** to hedge 1000 shares of INTC until October 17th.

As you can see at the bottom of the screen capture above, the net cost of this collar was negative, meaning you would collect more in income from selling the call leg than you’d pay to buy the put leg of this collar.

Optimal puts and optimal collars on securities with high expected returns can be used to build a hedged portfolio around a position, in order to maximize potential return while limiting downside. For an example of a hedged portfolio constructed around another tech stock – Microsoft (MSFT) – see this post.