Image via the CDC, which now appears to have overestimated the impact of the novel coronavirus.

Fellow Slopers: In a post last month (Surviving COVID-19), I included the graphic below, which suggested that with mitigation efforts (washing hands, staying home, etc.) we might just stay below healthcare system capacity.

In another recent post (Waiting For The Worst), I included an estimate that U.S. deaths at the peak of the virus later this month might exceed 80,000. Now it looks like both were too pessimistic. The Institute of Health Metrics and Evaluation at the University of Washington updated its models on Sunday and now predicts peak ICU usage of about 29,000 beds by April 15th (the U.S. has about 115,000 ICU beds, extrapolating from Forbes’s per capita data).

Screen capture via the Institute for Health Metrics and Evaluation.

That’s consistent with reports last week that the 1000-bed U.S. Navy hospital ship the USNS Comfort, docked at Manhattan’s Pier 90 was only treating about 20 patients.

Similarly, the IHME also updated its estimate for coronavirus deaths, to about 37,000 at this month’s peak, and about 82,000 going out to August.

The ~37,000 deaths by mid-April is consistent with current data from the COVID-19 tracker below as of early Monday.

The daily growth rate of 14% shown there implies about 36,000 deaths by mid-April (of course that growth rate will likely fluctuate between now and then).

So, the impact of the virus in terms of deaths and strain on our hospitals looks like it may be less than what was feared.

All else equal, if what I wrote above is correct, the implications ought to be positive for stocks. Whether they will be in the near term probably depends on how much of the bad economic news that’s already in train due to the lock downs is baked in to current prices. To what extent that’s the case, I have no idea. Drilling down a bit, there’s also the question of the impact of the lock downs on sectors and companies that were challenged before this crisis, such as the outlet mall REIT Tanger (SKT) I discussed in my previous post (Letting Options Tell You When To Avoid Stocks).

Portfolio Armor’s approach since the beginning of March has been to shift away from stocks. For example, its top ten names from March 2nd only included two stocks, Allergan (AGN) and LogMeIn (LOGM ). Since then, that top ten cohort is up fractionally, with the long bond ETF TLT taking the lead.

Interestingly, Portfolio Armor security selection during this crisis has been similar to its security selection for extremely conservative portfolios last fall, with an emphasis on government bond ETFs. Here, for example, was a portfolio it created on October 3rd for investors unwilling to risk a decline of more than 3% over the next 6 months. 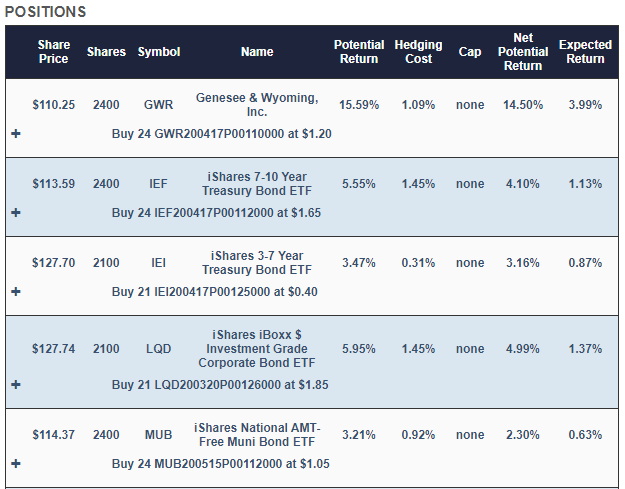 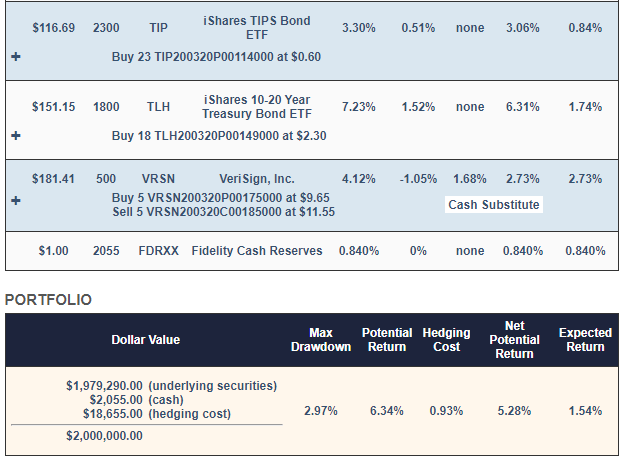 And here’s how that portfolio performed over the next 6 months, net of hedging and trading costs:

https://slopeofhope.com/2020/04/maybe-it-wont-be-that-bad.html
Maybe It Won’t Be That Bad