It was another impressive performance by the Slope traders.  Thanks again for everybody who participated and shared their trading ideas!

This
week's contest received more short entries than long, and favored large-caps
over smalls.  Longs were systematically
hammered, and a great percentage (75%) of short positions ended the week with
positive gains.  On the long side,
merely one of nine managed a positive return, not surprising considering the
broad market declines.

I won't
be holding a contest this coming week, since I'll be traveling to Mexico
Wednesday through Sunday.

Large Cap
Winner –  AngryWetCat, with his CMC
short.  This ended the week with an 8.7% gain.  Congratulations!

AngryWetCat: First, let me say to win when thrown in the bears den with the Slopers is an honor.  The people there are really good and are on top of their game.  That's why Tim's blog is the best out there.  So many smart people willing to share what they know.

Second, I suck at picking individual stocks.  So I needed a little help. I went back to my roots:  PnF charting.  I started with the bottom two sectors in the market, Platinum and Precious Metals and Metals, Non Ferrous.  Thinking about the potential for volatility in the PM's, I focused on the Non Ferrous Metals.  I was looking for companies that had negative relative strength when compared to the S&P Equal Weighted Index, negative weekly and daily momentum, were below both the 50 and 200 day MA, were on sell signals when compared to their peers and were forming bearish triangles.  Putting all of this in Dorsey-Wright's screener, it was a fairly short list.  It didn't take long to find CMC.  It had fallen apart in September, and showed no signs of gaining back momentum anytime soon.

So that was my pick.  The ideal entry would have been between 17 and 17.25, but that's life.  Take what the markets give you.

Small Cap
Winner – Fayssoux for an 9.0% gain shorting SNF.  I was unable to contact Fayssoux so I'll post his original entry
as explanation for his position.  He's
been absent (fighting crime?) over the last several days.  Well done, Underdog!

Other
notable performers this week:

No notable long performances occurred.  Bulltard
of the week is me (Biff) for a 1.5% gain in FLXS.

Good morning Slopers.  I hope this post finds you having a simply awesome weekend.

From a subscriber this morning:

"Hello
Gary, as a reader from Germany I appreciate your work a lot because we
are a country without precious metals companies, experience and
therefore little interest in this complex. I live in the Euro-Zone and
therefore I would be very much interested in your view about Gold
measured in Euro. Thank you very much in advance, –A"

Well, thank you
very much 'A'. Had you not mailed this morning, I would not have taken
a look at this compelling picture of gold-euro today. Aside from what I
consider to be bullish fundamentals for gold in all major currencies,
even as gold takes a much needed breather in USD, it looks technically
compelling in Uncle Buck's chief competition in the toilet paper
sweepstakes, the euro.

The chart shows a textbook Cup &
Handle, complete with the right side high of late November, '09 having
exceeded the February, '09 high. I always like to see the right side
(most recent) higher then the left (previous high) as this implies
momentum and allows for a higher measured target, which in this case
would be around 10 if and when the handle breaks consolidation to the
upside. I say if because we
do not try to predict, but rather show the probabilities. The
probabilities, both fundamentally and technically say 'GOLD GOING WELL
HIGHER IN EURO'.

We'll keep an eye on gold's progress in euro and many other assets going forward, given the oncoming deflation whiff and its implications.

It's a bit of a paradox that the better we are doing in the market, the more nervous we get. It seems to me that the bears have finally wrested control of the market from the bulls, but the choppy down-and-up nature that I see in the months ahead is going to be very challenging to navigate, at least from a short-term trading perspective.

In the long-run, I'm confident that it would take almost a miracle for prices to shake off the weakness we've seen for the long haul and push their way into a new bull market. Looking at a graph like the one below, I think such a notion is nothing short of absurd.

But the "snapback" that some of us are dreading (or anticipating) is harder to call. Certainly the past week saw many opportunities for such a snapback, including more than one triple-digit rise in the Dow, but each of those rises was stamped out like a wayward campfire discovered by Smokey the Bear. Looking at, for instance, the $RUT, I see such a snapback being good for only about 3% to 4% on the big indexes (in the case below, about to where that horizontal line is).

I'm trying to keep my eyes open for the best place to allocate funds for the snapback rally. I have tried – repeatedly – to do so with precious metals, but that hasn't taken hold at all. I've made a little profit here and there, but I've had losses too, and on the whole I've netted a small loss – – my activity in SLV and GLD has simply not been worth the bother. I still think SLV and GLD have a shot at a nice bounce, but I think I'm going to avoid GDX altogether. Its pattern seems horribly vulnerable right now:

The last time we saw a top like that, the aftermath wasn't pretty:

I am normally blessed with good health, but I'm fighting back a cold right now, so I probably will leave this as my one post of the day, updating the site with another OilPrice post later. Thanks, and enjoy your Sunday.

I've made a few changes to the charts. I'm going to continue to use the 164 sectors/sub sectors on the weekly sort; however, I'm changing the chart presentation. I'm using the broad sectors, and I'm including daily, weekly and monthly charts.

Here's the best/worst sectors relative to the broad market: 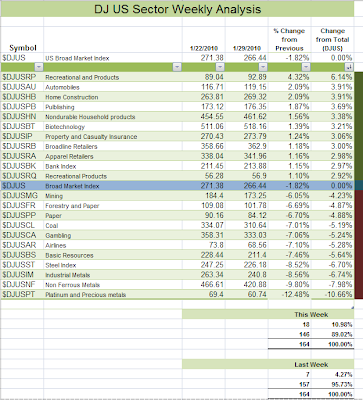 You can find the full summary of the sectors and the chart book of broad sectors in daily, weekly and monthly format here.

Since the past couple of weeks have been pretty amazing, I reflected back a bit on what I was writing near the top. I still say, as I did back on the 20th, that I want some kind of medal or tiara or something if 1152 turns out to have been the ultimate top.

More importantly, I was doing a lot of hang-wringing on the very first day of the drop. Why? Because it's all about psychology at this point. What happens to bears when they've been beaten up for ten straight months? Well, they get a little skittish. So at the first sign of a profit – bam! – the temptation is to just take it and run for cover.

In spite of this temptation, I left well enough alone, and thank goodness for that. I had, at the top, posted a series of charts I thought would be interesting to short. I broke these symbols up into posts one, two, three, and four. Here, after a couple of weeks, are where those prices stand:

So a couple of small duds, but mostly quite good, and a couple of really great winners. I show the above table to illustrate how quickly some issues can lose value. Remember, this is just over a span of nine trading days.

So now what – – well, being a generally worrisome fellow to begin with, my hand-wringing hasn't stopped. Indeed, with a fat plate of paper profits in front of me, it's more tempting than ever to run for the exit and wait for the bounce (which may or may not ever happen). But – as on the 20th – I must not allow myself to close out my positions based on nothing more than the prospect of a lift in the market.

Let me share one other thought in this very un-chart-y post. There was a phenomenon I experienced back in the wonderful days of late 2008 that went something like this: the trading day would start out, my positions would be doing very badly, but in the back of my mind I knew it was actually going to be a great day. And, sometimes slowly, sometimes quickly, things turned around, and by the closing bell, sure enough, things ended spectacularly.

I had forgotten what that felt like, but that peculiar effect has returned. And, as difficult as it is to describe, I have felt an eerie calmness lately on those mornings when it seemed like 'the bounce' was finally here, and all my short profits were at risk. It's happened several times lately, particularly yesterday. The morning started off with very deep losses, and I simply walked away from the screen for an hour (which for me is a lifetime), knowing things were going to be OK. And I closed January at the top of my equity curve.

The experienced traders out there know there is a fine line between quiet confident/discipline and cockiness. My tool to maintain this discipline is the tedious, boring, exhausting, but absolutely essential re-setting of stops across a bazillion positions – – sometimes on a daily basis. And that's all I've got to say about that.