As SPX was testing rising support from the low yesterday I did a chart on the SPX 15min showing the three important short term support levels on SPX to watch. I was going to post this on twitter but that was down for quite a while yesterday so I posted it on slope and BlueChipBullDog instead. The first level was that rising support from the low of course, the second level was at the IHS neckline in the 1335 area, and the third level was in the 1325 area, that I gave as a line in the sand yesterday morning on the basis mainly that none of the five reversal IHSes that made target since 2008 had retraced more than ten points below the neckline. Here is that chart: 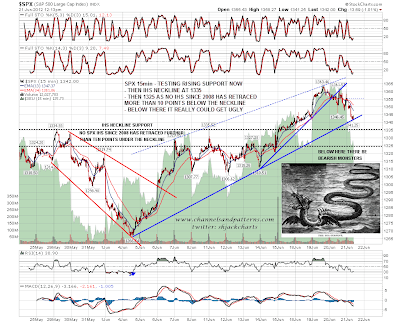 By the end of the day SPX had fallen through the first two levels and closed at the third. Here's how that chart looked at the close yesterday: 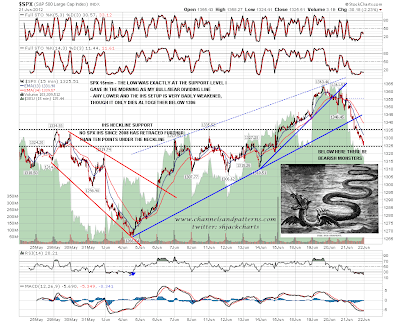 The first thing to say therefore is that this reversal IHS setup is not dead yet, though it is damaged. Bulkowski  gives the odds of these making target at 74%.  After yesterday's meltdown, and in the overall context, I would scale that down to 50% now, declining rapidly on any move below yesterday's low, and I'd write it off altogether on a move below the right shoulder low at 1306.62. The failure of a high probability pattern like this is indicative of a strong trend in the other direction, and in that event we might well see a violent move in the direction of that downward trend.

There are three main reasons that I'm downgrading the odds on this H&S making target. The first reason is that SPX closed well below the neckline, which isn't great though it doesn't invalidate the pattern. The second reason is that, as I've been mentioning regularly over the last couple of weeks, the overall setup favors this move up from the low being a counter-trend rally in my view, which means both that bull patterns are more likely to fail, and that a high probability area for a rally high is at the test of the 100 DMA, which is where the rally has peaked so far.

The third reason is that the close was five points above the middle bollinger band on the daily chart, which qualifies as a test of that level. Since October we have seen fourteen tests of the middle bollinger band and it only held as support or resistance on five of those tests. On a close below that (currently at 1319) the odds of seeing at least a test of 1300 (a few points above the 200 DMA at 1295) would be high, and five out of seven of those breaks below hit the far bollinger band, currently at 1276. Here's how that looks on the daily chart: 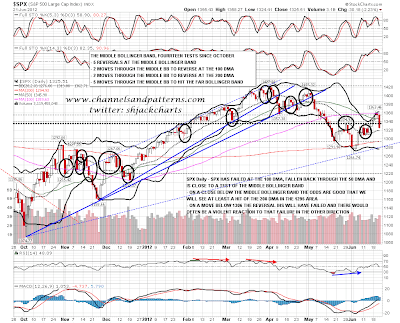 I posted the TLT chart yesterday, noting the decent declining resistance trendline from the high. That broke up yesterday which is bullish, but we need to see a higher high over 127.34 next. That higher high would suggest a test of the high at 130.39 and possibly much higher looking at my longer term bonds charts. TLT looks cautiously bullish here, and therefore cautiously bearish for equities: 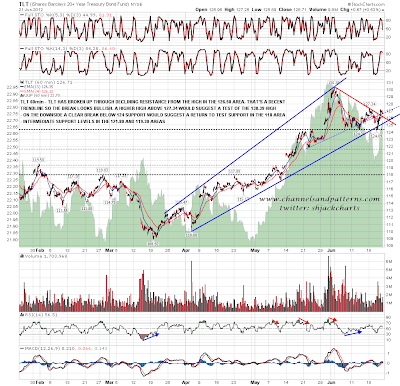 On EURUSD the bearish pennant I've been posting has broken down. There are a couple of ways to calculate the target for this. The full technical target is in the 1.175 area, but Bulkowski suggests adjusting this by the probability of reaching target, which is only 51% on a downward break, so that would be in the 1.225 area, just below the current lows. That would look cautiously bearish for equities here as well.

I posted the possible double-top on oil yesterday and oil is now testing that double-top neckline on the futures chart. The double-top target would be 43.5 on a conviction break below 77.55, and Bulkowski gives a 72% chance of these reaching target, weakened somewhat by this being a pattern with the peaks a year apart. Here's how that looks on the CL daily chart and it's worth noting the positive divergence on the daily RSI here which suggests that support may well hold this time. A break below this support would look distinctly bearish for equities, as they are positively correlated:

I posted charts on gold and silver on twitter yesterday that didn't make the cut for my morning post. We saw strong moves in both yesterday and are now reaching a very important test for precious metals. I posted my main silver chart a few weeks ago showing the key support levels at rising support from the 2008 low, and that's now in the 26.50 area, and strong level support at 26.15 – 26.30 just below. I have a large declining channel from the 2011 high and a smaller declining channel from the 2012 high. Either of those support levels above 26 may well hold, but if they don't the outlook becomes extremely bearish, and I'd be looking first at the smaller declining channel support in the 23.5 area, and then at the major level support in the 19.5 area: 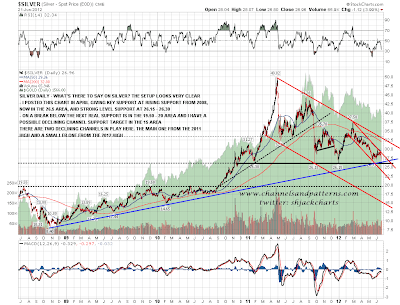 Is there any support for the bear case on PMs here, apart obviously from the declining channels on silver? Yes, and that support is again from GDX, as it was when I was looking at this in late February. A lot of PM bulls are getting excited about the IHS on GDX, and there obviously is an IHS on GDX, but that IHS has formed at the neckline retest of the much larger H&S that I've been posting regularly since late 2011. This setup is an inverted version of the H&S that formed in summer 2009 at the retest of the neckline of the IHS that formed at the 2009 SPX low. I'm sure we all remember how that turned out, and if this setup on GDX goes the same way, then the next move is towards the H&S target in the 31-2 area on GDX. Just sayin'. If silver breaks support here then that is the outcome that I would be looking for: 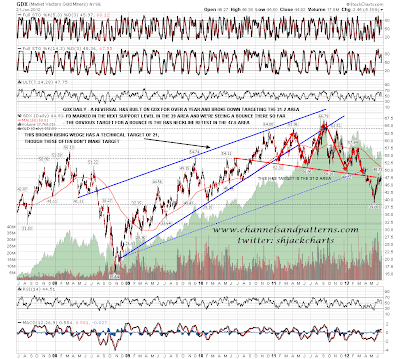 The bulls need to perform here and quickly push back above the main support/resistance level on ES over the last few days which is at 1340. The overnight action on ES is ambiguous, as it has seen two tests of the low on positive 60min RSI divergence (bullish) that has overall taken the form of a bear flag (bearish). We'll have to see how that goes. After a trend day like yesterday the odds favor consolidation or retracement today.