Further to my last weekly market update, here is a summary of where money flow ended for Week 3 of June 2012.

I'd like to see price hold above the current month's Volume Profile POC and increasing volumes enter to confirm any potential sustainable breakout and hold above the downtrending channel, in order to launch a renewed bull move above the middle Bollinger Band, the 1-Year Volume Profile POC, and, possibly, to the upper Bollinger Band…otherwise, look for more volatile and deep intraday swings, and possibly a new low for 2012. 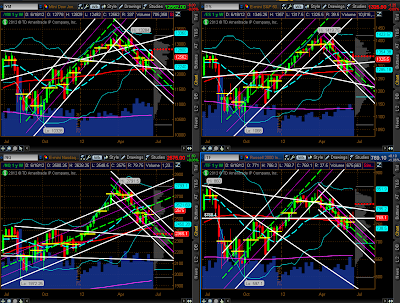 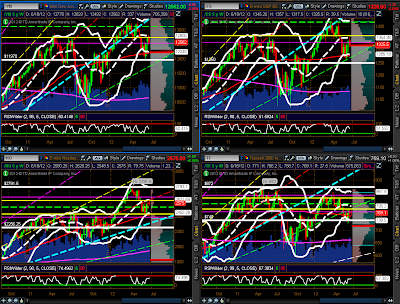 The Weekly chart below of the NYSE Summation Index shows that a second higher weekly close was made to, potentially, confirm a BUY signal for the SPX on this timeframe, as per the Stochastics crossover. This should, however, be viewed in the context of what happens next week on the above charts, based on my comments, as noted. 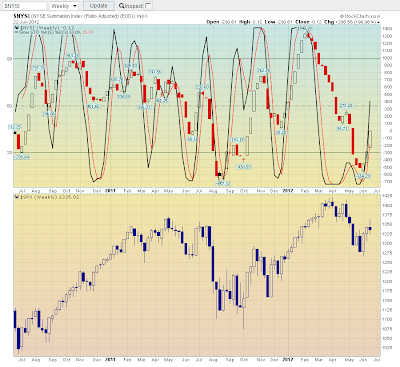 Stocks Above 20-Day Averages closed slightly lower than the prior week at 62.19%. 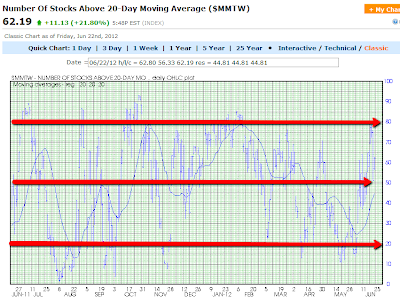 Stocks Above 50-Day Averages closed slightly higher than the prior week at 42.27%. 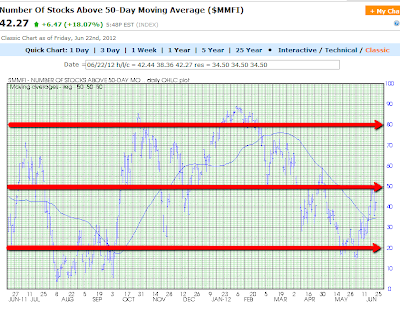 Stocks Above 200-Day Averages closed slightly higher than the prior week at 51.93%. 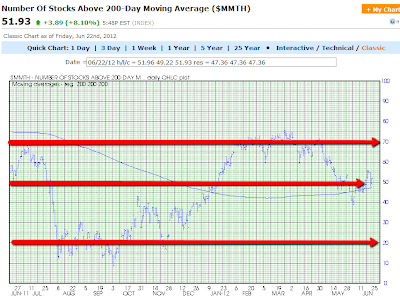 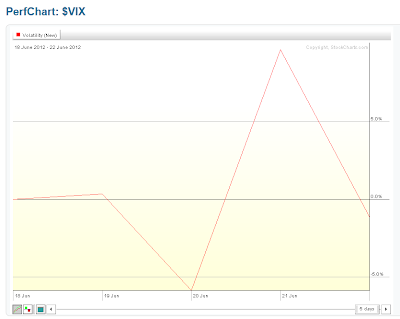 Further to the comments in my last weekly market update, the Daily ratio chart of the SPX:VIX shows that the SPX rallied, declined, then bounced to close higher than the prior week above what was a downtrending resistance line and the 50 sma. Near-term support is at the 50 sma at 66.95, followed by the 200 sma at 59.31. The RSI, MACD, and Stochastics indicators have been trending up, however, the Stochastics has hooked down in overbought territory and the MACD histogram has lost a bit of upside momentum. 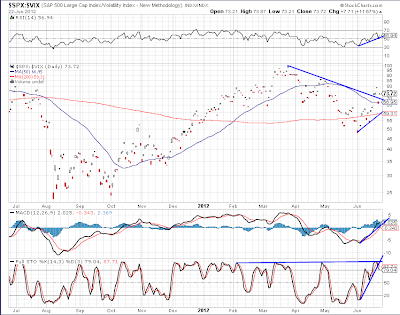 The Daily chart below of the V IX shows that price closed below a major support level of 21.00. Any move higher would find some resistance at 19.00, 21.00, and finally 27.00…major support is now at 17.00, then 16.00…all important levels for the VIX relative to my comments above pertaining to any breakout and hold on the SPX above its downtrending channel, as well as the 50 sma support level on the SPX:VIX ratio chart. 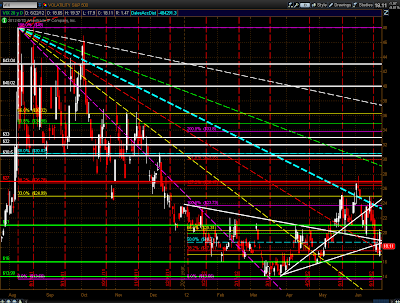 As shown on the graph below of the Industry Groups, there were minor gains in the Banks, Pharmaceuticals, Biotech, and Brokers…a continuation of the prior week's accumulation. The largest losses were made in Gold/Silver, followed by Oil Services, Retail, Internet, and Semis. 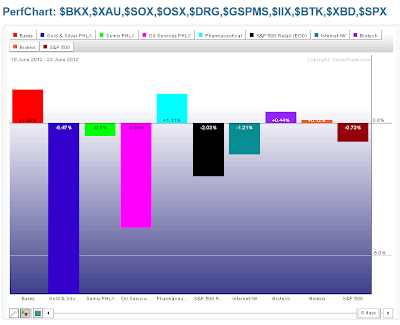 As shown on the graph below of the Major Sectors, there were minor gains in Financials and Health Care. The largest losses were made in Energy, followed by Utilities, Consumer Staples, Materials, Consumer Discretionary, Industrials, and Technology…more profit-taking in some of the defensive sectors than in more risky assets (which were accumulated the prior week). 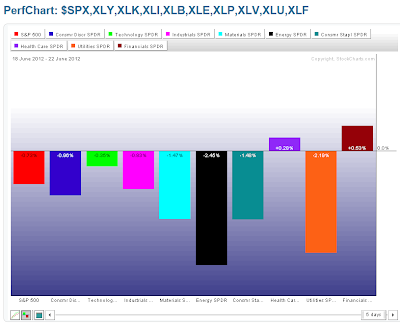 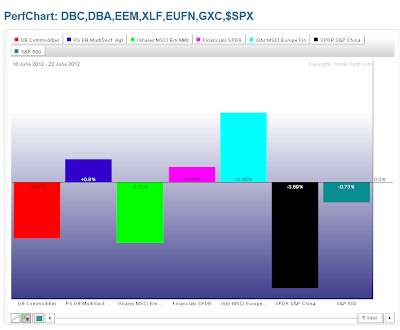 The Daily charts below of EEM and the BRIC countries show that price attempted to move up on EEM, Brazil and Russia, but then declined…India simply continued to consolidate…but the Shanghai Index didn't rally and, instead, fell and closed below its major support level of 2300 to rest just above its next support of 2250…a drop below this level could send it down to this year's lows just below 2150 (which happens to be a three-year low). These indices are worth monitoring to see whether they advance or decline compared with the U.S. Major Indices, in particular, the Shanghai Index, in order to determine whether global confidence is increasing or decreasing in market stability at current levels. 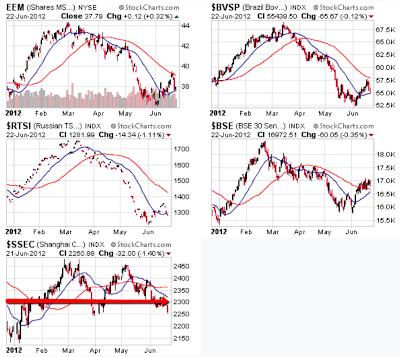 The Daily charts below provide an update on price action on DBC and AUD/USD since my last weekly market update. DBC dropped and closed below its bear flag in spite of diverging MACD, Stochastics, and RSI indicators. The AUD/USD forex pair broke briefly above the 1.01 resistance level, but closed below. They are both trading under the bearish influences of a "Death Cross" formation, and, as such, will likely continue to exhibit volatile (and potential choppy/whippy) price action for awhile…ones to watch in the days/weeks ahead, as they will likely affect equity markets, as well. 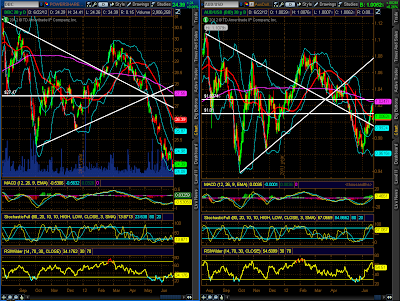 As shown on the graph below, the largest losses were made in Silver, followed by Oil, Gold, and Copper. 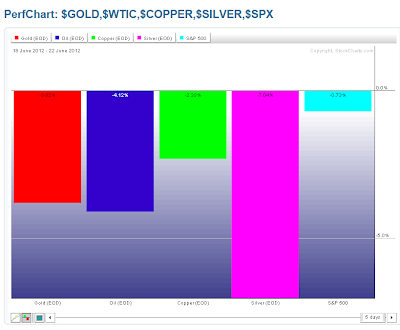 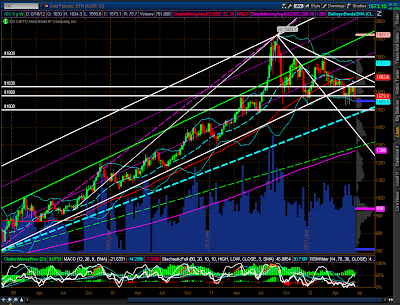 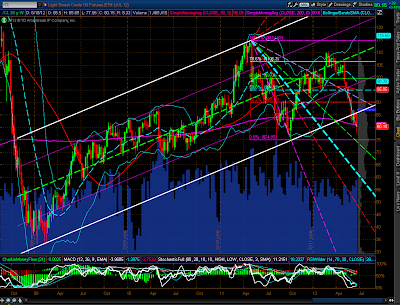 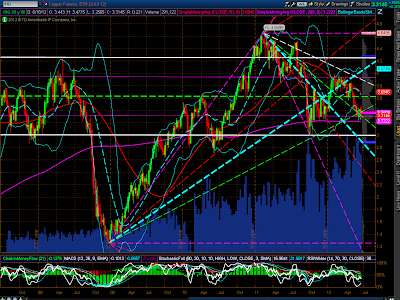 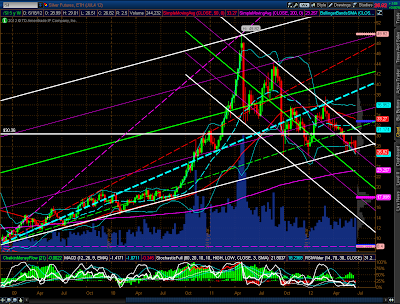 As shown on the graph below of the Major Indices, the Dow Utilities lost the most, followed by the Dow Transports, Dow Industrials, S&P 500, and the Nasdaq 100, while minor gains were made in the Russell 2000. There were gains in the Corporate Bonds ETF (JNK), and losses in the Emerging Markets ETF (EEM), and the High Dividend-Paying Stocks ETF (DVY). 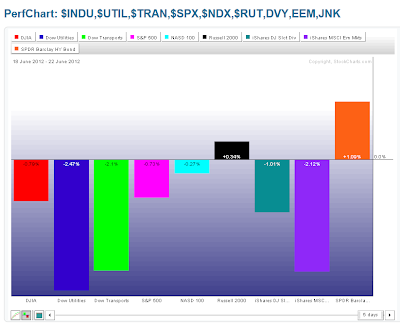 As shown on the currency graph below, money flowed into the U.S. $ and out of the Japanese Yen, British Pound, Aussie $, Canadian $, Swiss Franc, and the Euro. 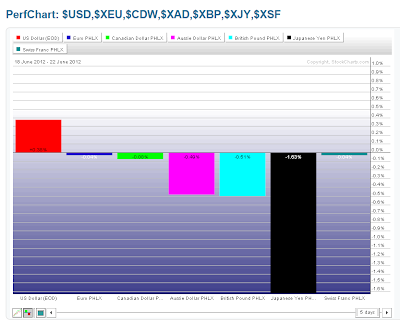 The Daily ratio chart below of the SPX:U.S. $ shows that the SPX failed to hold onto its rally and closed just above a support level of 16.00, but below its 200 sma at 16.34, which is, once again, resistance, followed by the 50 sma at 16.63…one to watch to see if buying pressure returns in equities compared to the U.S. $, and whether the MACD can cross and hold above the zero level. 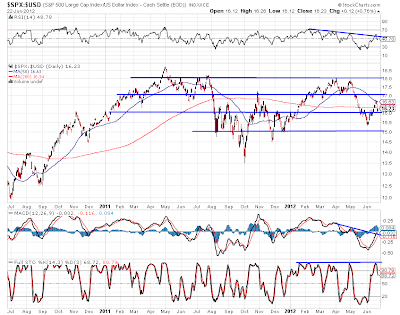 The next chart of interest is the Weekly chart below of the 30-Year Bonds (ZB). Price closed just below its confluence of trendline and Fibonacci levels, but still within a high-basing consolidation range…one to watch, since the markets haven't yet completely divorced from this Bond. 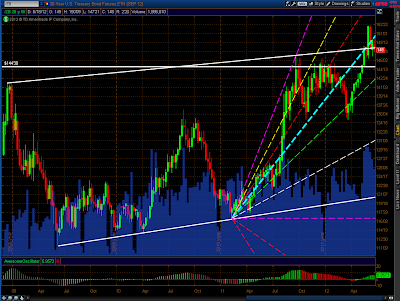 FYI, and further to my post of June 14th, I can now move BID and C out of List #2 and into List #1 of stocks/ETFs which have now experienced a bearish "Death Cross" moving average formation on their Daily timeframes (note that I moved GXC from List #2 to List #1 last week). All stocks/ETFs in what is now two lists (List #2 on "Negative Watch"), are subject to potential volatile intraday swings, and are important ones to watch over the next days/weeks. Please refer to the updated Daily chartgrid showing all the stocks/ETFs in question. 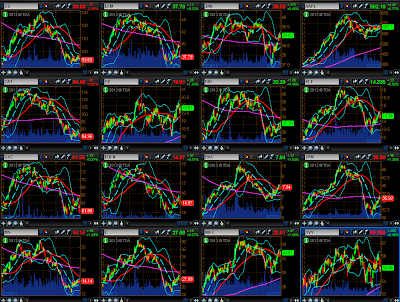 In summary, here is the problem, and here is one solution. I won't repeat what I said in each of these two posts since each one contains a noteworthy summary, they complement one another, and the summaries in both are relevant and can be applied to what I've discussed in this post.