My adoration for sports is well-known with regular readers. To my way of thinking, sitting on a couch and watching strangers engage in physical activity whose resulting victory or loss has no bearing on my existence is a pleasant and harmless way to while away one's life. Many would agree I'm one of the biggest athletic supporters in the financial blogosphere.

And, with the Olympics kicking off today, I thought it would be a fine time to look back at some of the prior events which, for various reasons, have been excused from the competition. Yes, these are real.

+ Underwater Swimming – held only once, in 1900. "The event is held over a maximum of 60m, where competitors were awarded two points for each meter swum underwater, and one point for each second that they stayed under water."

+ All-Around Dumbbell Contest – held only in 1904. How'd you like to be the gold medal winner in a sport with a name like that?

+ Live Pigeon Shooting – the only competition in which live animals were killed. Held only once, again in 1900, "Nearly 300 birds were killed. The event turned out to be quite messy in the end with dead or injured birds on the ground and blood and feathers all over the place."

+ Croquet – which holds the distinction of being far and away the most unpopular sport. "This tournament was also not a success with the spectators. Only one fan watched the events – an Englishman who had travelled from Nice especially for the occasion."

+ Motorboating – another dud, this time from 1908 in England. "It was not a great spectator sport either, with the action taking place off Southampton, where virtually no one could see the action. Due to bad weather, six out of the nine scheduled races were cancelled"

Well, this is going to leave a mark!

The @ES has exploded about 64 points higher over the past couple of trading sessions. It seems that the power of jaw-flapping has been sorely underestimated, and the chatter about supporting the Euro is having a massive positive effect on the market.

I've been stopped out of a bunch of positions (no surprise there, considering the move today!) and am down to 50% committed.

It wasn't long ago at all – just a few months, really – that Facebook was christened as the salvation of the Silicon Valley. Everyone wanted to work there; everybody wanted a piece of their IPO; everyone dreamed of how rich they could get if they could get just a little slice of the social media pie with their own three-person startup backed by $5 million in venture funding.

Things have changed quite a bit. With Facebook's stock now at a 50% loss (measured against its high, set within minutes of the May 18th initial public offering), it's becoming clear that just about every entity – human, corporate, and the way things are going, perhaps even extraterrestrial – that touches Facebook gets the zap put on them. Off the top of my head:

+ Zynga – whose stock is down over 80% from its own high, having attached itself to the Facebook star and the promise of Earth's population playing FarmVille for the rest of their lives;

+ NASDAQ – which is still struggling to come up with a huge payoff to the affiliated parties that lost so much money by participating in one of the highest-visibility IPOs in history;

+ Broker/Dealers – such as Knight Capital, which lost tens of millions of dollars be being involved with the completely botched IPO;

+ The Investing Public – which has lost billions and billions (best said in a Carl Sagan voice) by jumping on to the FB bandwagon;

+ Newer Facebook Employees – There is a caste system already in place in Menlo Park at the Facebook headquarters, located just a couple of miles from where I'm sitting. The brahmin are those who showed up early and have secured their billions (or hundreds of millions) by being at the right place at the right time. The untouchables are the poor slobs who came on board more recently and whose options are deeply underwater. The rich kids might decide just to take their fortunes with them; the rest of the employees will realize that they are pretty much working For Just A Salary (instead of guaranteed millions from the explosively successful FB options) and might feel a skosh resentful.

+ SecondMarket, SharesPost, and their ilk – Surely you recall how much press and attention these web sites were getting – – accredited investors got the privilege (!) of buying stock in firms like Twitter and Facebook from other individuals. I don't recall where Facebook peaked pre-IPO, but it at well over twice the current public market price.

+ Startups – Lastly, the bloom's fairly well off the rose here in the Silicon Valley with respect to social startups. After all, if the cream of the crop like Facebook has become a worldwide embarassment, what sort of appeal does yet another three-person firm of 21 year old kids have?

Of course, I think all of this is actually pretty healthy. The lunacy around Facebook was getting completely ridiculous, and now as Facebook confronts reality and recognizes that the suck part of being public is actually having accountability to shareholders, maybe they'll focus on creating products that are at once popular, useful, and very profitable. Suffice it to say that a lot of folks owning FB have decided that they're in it for the long haul at this point. They don't really have much of a choice.

SPX closed at the 100 DMA, the higher resistance level I gave yesterday morning. This is an obvious point of failure and we could well see that failure here. A break up over the 100 DMA opens the way to a likely test of last week's highs and the upper bollinger band in the 1380 area: 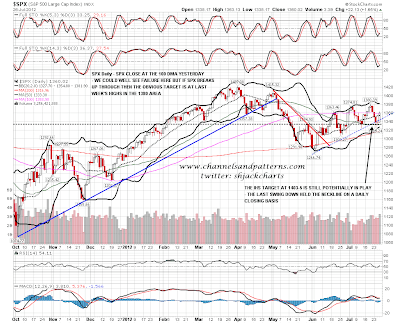