Greetings again from the Stanford Dive Center. My devotion to this blog knows no borders.

I'll mention as an aside that, as we approach August, it still hasn't been hot enough for me to open up our swimming pool at home. It seems the SF Bay Area is the only part of the country that has avoided heat this year. I don't miss it. If God deemed the temperature never go above 72, I'd be fine with that.

Readers who have been around a while know that I only dusted off my options account early in April. I had quick success with it, putting together a 70% profit in the span of something like six weeks. It's been languishing since then, slopping between about a 40% and 50% gain (e.g. I gave back some of my profits).

END_OF_DOCUMENT_TOKEN_TO_BE_REPLACED

Today's market scenario that I want to discuss is one that you've probably heard me warn about in the past in either various posts or in our chat room, but nonetheless, they end up usually being some of the worst trading sessions for the bulls, mainly because it comes completely by surprise.

So let's just jump right in it, what-do-ya-say?

The situation is this – you'll see the market open sightly down or slightly up, either way it doesn't really matter, but preferably, it tends to occur most when it's slightly down.

– After the open, it spends 15-30 minutes in positive territory. This gives the bulls the impression that the bears are giving up the battle early on and the bulls will lay on some new long positions.

- This initial move doesn't usually exceed 8 or so points on the S&P. If it does then the behavior falls into some other category.

- Then all of a sudden (still within the 1st hour of trading usually) the market will pullback… nice and steadily, not causing much alarm.

- But the it doesn't stop, and then you'll see it break the morning lows from the first hour of trading. Once that happens button down the hatches and get ready for an unexpected fight.

The Result: A solid day of non-stop selling – often leading to 2-3% sell-offs in the market…and I'm not kidding, it gets ugly. There usually is very little in the way of a bounce or relief rally intraday. If you don't get out of your longs when your stops hit, you're going to take a royal beating for it. And to be completely honest, I don't know what it is that causes the melt-down as I described… it just does, and sometimes that's all you need to know when trading the markets. Be sure to check-out Ryan's Blog at SharePlanner.com 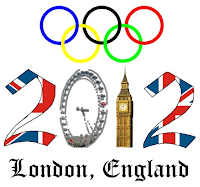 The 2012 Olympic Games will open this Friday in London, England. This news article mentions a cost to the British taxpayer of more than nine billion pounds, with a hoped-for return of 13 billion pounds over four years (as suggested by Prime Minister David Cameron). This seems like a pretty big gamble "at a time when Britons are struggling with a double-dip recession, rising unemployment and severe public spending cuts."

Data released on Wednesday shows that Britain's GDP dropped further into negative territory at levels seen in mid-2009, as shown on the graph below.

The Daily chart below of London's FTSE Index shows market action as at Tuesday's close of 5499.23. Major support lies at 5500, at the moment, and market action from mid-2011 is, basically, in a large trading range, defined by a triangle…in fact, this range extends back to 2009-2010 and is forming a large diamond pattern…potentially a topping pattern with a 1300 point range.

A drop and hold below this diamond could very well send London's equity index tumbling, possibly by 1300 points from 5500 down to the 4200 level, or lower…one to watch, along with future GDP data releases, as well as Libor fallout, over the coming weeks. 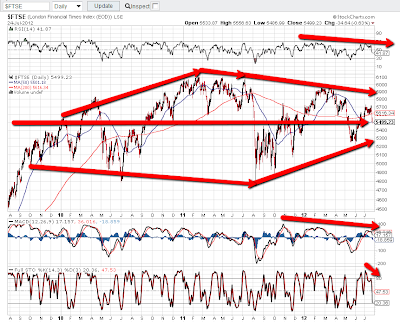 It's getting difficult to know what to blog about because I have so much to say. With all these positions (into the triple digits, as you know), I am paradoxically tongue-tied.

In spite of that, here's one standout that I'd like to present – Corning. I shorted them a few days ago, and they are down over 7% today. More important, the stock has violated pretty much the final support level propping it up, leaving it vulnerable to a waterfall slide.

As for my day so far – – it was discomfiting coming into the day so radically short – particularly since the ES had laid waste to its lows from yesterday afternoon and was disgustingly higher – – but I pledged that I would strap on my king-sized gonads this quarter, and they have served me well. As of this very moment, I am up 0.46% on the day versus a market which is down 0.25%. That, for me, is gratifying.