If price cannot hold above this level on these e-mini futures indices, they are in danger of dropping down to or below the June lows. 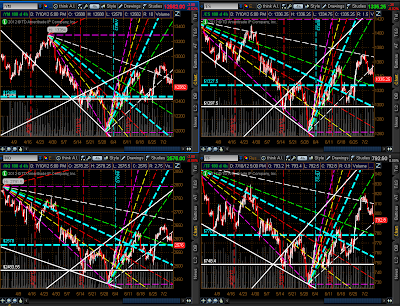 END_OF_DOCUMENT_TOKEN_TO_BE_REPLACED

I know I've mentioned WalMart before as a breathtaking stock, but I feel compelled to mention it again as it is pushing to never-before-seen highs in an otherwise boring market.

People point to Apple as the ultimate "gee, if only I'd bought it" stock, but WalMart puts Apple to shame. If you had bought AAPL at the IPO (and held on during the gut-wrenching ups and downs before it finally found its footing about a decade ago), your gain would be 15,000%. Not bad!

WalMart, on the other hand, is up more than 190,000%. There's a reason that Sam Walton's fortune, even when broken up into little pieces among relatives, since puts all of them near the top of the world's richest people.

Even though WalMart is sort of a running joke, it's undeniable that this must be an astonishly well-managed organization. They say you can't argue with success, so I would suggest that any arguments against WalMart would be swiftly snuffed out with just one glance at the chart below. If God himself came down and said this would be a $200 stock in a few years, I wouldn't have any reason to doubt it.

Over the past four trading sessions, the market has no doubt looked weak. Prior to what is at this point, a four-day pullback, the markets were sitting at extremes and begging for a pullback. Now that we've got it, it's important to see the manner in which it is pulling back and what we are seeing are the dip buyers on each day of trading buying up the market off of its lows, and wiping away much of the earlier day's bearishness. In fact if you look at the SPY chart, there are 3 consecutive doji candles.

So it is safe to conclude, with the low volume levels, that at this point, the market is experiencing nothing more than a light volume pullback.

I've posted below a list of 15 stocks that I find are setting up nicely to the upside. Put them into your watch-list and what you'll find is that they are either pulling back to a significant support level, consolidating after breaking out (i.e. bull-flag) or on the verge of a breakout through signficant resistance. Be sure to check Out Ryan's blog at SharePlanner.com

On my Trading Rules page, the first item cited is this:

Stops – a stop price must be in place at all times for all positions, and stops should be set generously enough so as not to exit a position prematurely.

I am quite diligent about setting stops; indeed, it's the only rule I am completely steadfast at following. This morning, unfortunately, I got a rude reminder as to the importance of the phrase I have put in boldface above.

I tend to go through all my positions each day, making sure my stops are at levels that are agreeable to me. If the market is moving my direction (like yesterday), I tighten many of the stops. Mentally, it's very satisfying, because I am reducing risk and helping increase the likelihood of locking in profits.