One of my better-performing shorts is Plexus, shown below. I think it’s headed for the high teens in the months ahead.

If you are a speculator, the extreme situations currently in play in
the broad stock market (95% of the way to a potential ‘triple top’
scenario price-wise, and 80+% of the way time-wise) and the gold market
(impulsive price drops amid growing concerns that the bull is dead
despite rising money supply data) as of March 1, 2013 are the situations
that you wait for.

In short, pivot points are the place to deploy capital (either to the
short or long side) for big gains.  The stock market has been on a
cyclical trend for 4 years and a secular, mostly sideways trend for 12
years.  Gold has been in cyclical downtrend for 1.5 years and a secular
uptrend for 12 years.  That is all well and good but trends can be a
grind, filled with ups and downs, stops and starts.

END_OF_DOCUMENT_TOKEN_TO_BE_REPLACED

Well, the disaster at Groupon should probably strike fear into the hearts of those owning such stocks as Zynga and, to a lesser degree, Facebook. Normally good-looking long patterns can get blown to smithereens overnight.

I imagine that GRPN will spend its future days filling in the gap below and basically farting around at approximately this price level. The bullish breakout is completely trashed, and GRPN is a piece of cow dung once more.

I've noted before that double-tops and bottoms are high probability patterns, and that when they seem to be failing we are often seeing a larger one develop. That may well be what we are seeing here on SPX, and on a clear break below the current low at 1485 that pattern target would now be in the 1440 area. Here's how that looks on the 60min chart: 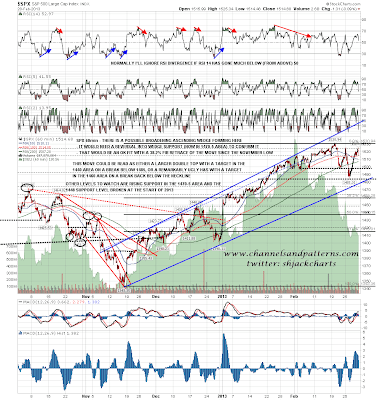 END_OF_DOCUMENT_TOKEN_TO_BE_REPLACED

So I guess the threat of a miniscule, spit-in-the-ocean cut in our bloated federal government has everyone's panties in a bunch. As if the pitiful slowdown in the growth of spending this year will make any difference.

Frankly, the entire government aparatus – federal, state, and local – could completely shut down, and I couldn't care less. For an independent fellow like myself, the government has provided one and only one service my entire life: it has stolen money I earned.

Personally, I'd have preferred keeping the millions of dollars I've handed out over the years for the benefit of folks like the trolls I saw ambling around the DMV a few days ago.

So the government's going to cut back a teeny bit on a few services? Big deal. Shut it down. Shut it all down. I'm fine.

And, on that jolly note, let's tear it apart in March. This market deserves to be carpet-bombed. You may fire at will.