Well, a big FOMC day is looming, and Ben (“Shalom for Brains”) Bernanke and Janet (“Gimme a Pair of Duracells – Quick!”) Yellen will be squatting over us all Wednesday at 11:00 a.m. Slope Time, with the bearded wonder mewing out his platitudes to the dim-witted public half an hour later. I am hoping my 75 short positions rush out onto the football field and form a magnificently obscene gesture, Stanford Marching Band style, once these yo-yos are done with their dirty work.

Of course, these two, and their cabal crew, are the sworn enemies of the champions of truth and justice (that would be us, in case you’re a slow Sloper), so it could get ugly. But I wanted to muse tonight as to how much the powers that be might permit the indexes to sink before they doing something Dramatic, in keeping with their Dual Mandate, which of course is to:

END_OF_DOCUMENT_TOKEN_TO_BE_REPLACED

My affection for George Carlin is well-known. He is, after all, the Patron Saint of Slope of Hope.

I hadn’t seen this interview before, but I tripped across it by chance. It is a wonderful interview for a couple of reasons. First, George basically talks about himself for an hour. There’s no interviewer jumping in; it’s just him and the camera. It’s the closest I’ve ever felt to knowing what it would like to have actually met him and listened to him as a real person, instead of as a performer on the stage.

Second, his values really shine through. He is obviously a very moral and thoughtful man, and he is someone who tried to be wise about the decisions he made in his life. And he had a truly amazing life. This is something I would like to be able to say of myself in the end. I’ll never be a Carlin, or anything close, but I’d at least like to look back and think I didn’t screw up too badly.

Some of you recall that hearing about Carlin’s death was a “JFK moment” for me. He was a comedic genius, and he helped me understand how frustration and anger can be crafted into creative forms of expression. If you even a passing interest in Carlin, please do watch the interview.

Like the zigzag roads that the Romans built in order to ascend mountains, the market continues to wind its way upwards, as demonstrated on this 60 min (market hours only) chart of the Russell 2000 E-mini Futures Index (TF). 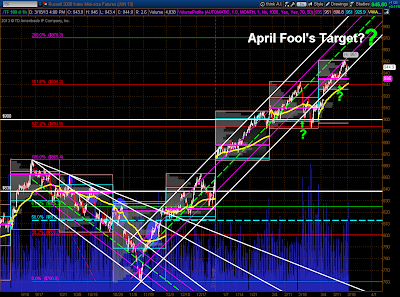 At the moment (Monday's close), price has been generally confined to the uptrending channel. Until we see that trend broken by a series of lower highs and lows (with deeper drops), we'll likely see that continued, as the markets (backed by the Fed's unprecedented monetary easing and asset purchase programs) seem to be adept at fending off negative global and domestic news and economic events, including perceived threats of negative contagion. In other words, the markets appear to have the mentality of "Id imperfectum manet dum confectum erit." — "It ain't over until it's over."

However, the notion that "government 'theft' of bank depositors' savings could not spread to other countries and would not be a concern anyway, because money tied up in the markets is not sitting in a deposit account and is, therefore, safe from a similar fate" would be naive or ill-conceived. The mere fact that this has been conceived for one country is evidence that such a scenario exists for others as an unformed probability and is subject to the irrefutable laws of nature. The Law of Attraction dictates that belief in and acceptance of such a possibility will be attracted to that source. Ultimately, force never ends well and what happens in life is eventually reflected in the markets.

To
that, I say thank you… and offer a hearty congratulations.

It’s
our hope to provide even more explosive gains especially as we head into ASCO
2013, or the American Society of Clinical Oncology meeting held every year.

Every
one knows nothing has the power to send a biotech to the moon like the FDA.

END_OF_DOCUMENT_TOKEN_TO_BE_REPLACED

The overnight action on ES was not encouraging for the bear side. ES has recovered over the 50 hour MA and that has now held as support overnight. Declining resistance from the high has also broken. We could decline from here still but on a decent break over 1550 a retest of the current highs seems likely: