One year ago, March 2012, people were flying to Los Angeles and gearing up for an investor conference dedicated to one and only one company: Apple. That's right; the entire conference wasn't just about trading stocks; it was about trading AAPL. (I was going to show you the site, but the URL now is dead and parked, although their Twitter feed – dormant for the past nine months – is still viewable).

It's kind of remarkable that so many indexes have made lifetime highs recently including, of course, the Dow 30 today, without Apple's participation. AAPL has fallen 40% from its peak, but in spite of this, the once-largest company in the world having this kind of collapse, the rest of the market has merrily churned higher.

END_OF_DOCUMENT_TOKEN_TO_BE_REPLACED

Even with Yahoo's stellar strength over the past year, the stock is still about 80% lower than its Internet bubble high. As I think back to Yahoo's revolving door of CEOs, I can't help imagine to myself that, some years ago, the board collectively stated: "What we need is a pissed-off blonde female", and they got Sue Decker.

END_OF_DOCUMENT_TOKEN_TO_BE_REPLACED

I wrote about AAPL and the AAPL:NDX ratio in my last Weekly Market Update.

At the time of writing this post just after noon on Tuesday, AAPL has rallied a bit today, as shown on this 5-Year Weekly chart, in conjunction with today's rally in the Major Indices (as I wrote about earlier at this link). However, it has done so without first testing it s major support level below at 400, so a bounce here may not be as strong a signal to indicate that AAPL's low has, in fact, been made, for now (although its low of 419 came close, so it may be close enough). 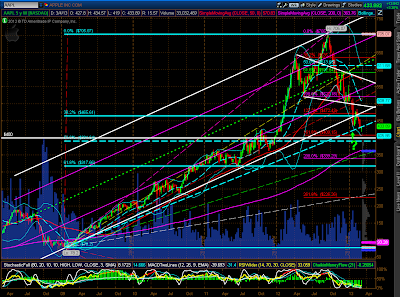 We'll see if this major support holds, and whether AAPL can continue to rally…I'd like to see higher volumes enter on such a rally, however, to support such a move. Theoretically, we could see AAPL rally to a confluence level of the bottom of the channel and 2 Fibonacci retracement levels at 472ish (as shown on the Weekly chart of AAPL above).

AAPL is still not out of the woods yet, as it is still, technically, in downtrend on the Daily and Weekly timeframes. As I mentioned in my above referenced post, a failure of AAPL below its major support level of 400 could send it tumbling down to around 350, then 300. It's one to watch to see if it supports any further rally in the Major Indices. 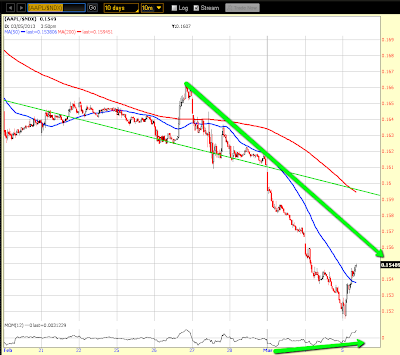 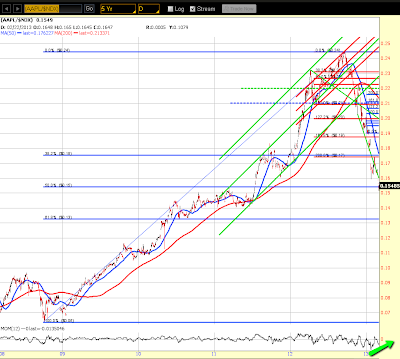 GOOG was charted several months ago
showing a breakout and retest.  Well, it went on and on and on and has
now come to what would be the most optimistic measured target at 830.
Just sayin’.

Tibxo (symbol TIBX) is one of my many shorts, and definitely one of the better performers. Anything that can manage to be down over 1% on a day like this is a friend of mine.