Foreign interest in U.S. securities has been sparse and sporadic since mid-2011, as shown on the graph below. Data released today shows another monthly drop in foreign purchase of U.S. securities.

Inasmuch as "demand for domestic securities and currency demand are directly linked because foreigners must buy the domestic currency to purchase the nation's securities," one has to wonder how much longer the U.S. economy can continue to "recover" and at what pace without increased foreign interest…particularly as the SPX faces this potential scenario. 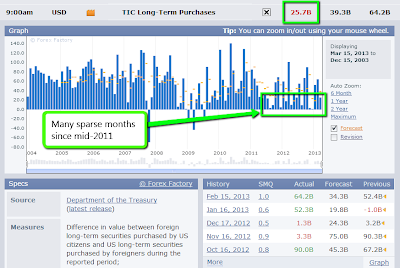 END_OF_DOCUMENT_TOKEN_TO_BE_REPLACED

US Consumer Prices Rise .7% in February

From ammo to zuchs… too funny.

Let’s remember that inflation is not this headline about prices.
This is a result of the inflation that has been systematically
administered by Dear (Monetary) Leader since well, 2009 and most
recently and intensely, since the dawn of 2013 (post-Twist).  Let’s
remember that the current expected economic bump (and this site expected
it dear bull apologists) was not going to come without a cost.  Let’s
remember that Bernanke is the same buffoon he was perceived to be in
2011.

END_OF_DOCUMENT_TOKEN_TO_BE_REPLACED

On this day an awfully long time ago a roman general turned dictator for life learned the importance of maintaining a decent personal security team in a tyranny. It hasn't tended to be a particularly eventful day since then though there are strong rumblings on USD and CL today which I'll be coming to later.

SPX pushed up strongly yesterday and closed 6 points below the daily upper bollinger band. Historically this signals that the unusually short retracement from the upper bollinger band has ended. SPX is reaching 70 on RSI again so we are in an area where the next big high may start to form, but that could take a while and go quite a bit higher: 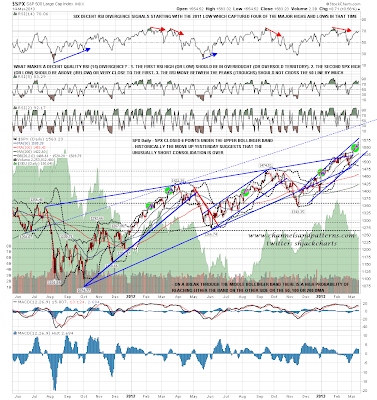