On 25th October 1854 one of the most famous mistakes in modern (ish) warfare was made in the Crimean war at the Battle of Balaclava. Due to a mix up in communications the Light Brigade of the British cavalry was sent to frontally assault a very well defended artillery battery. This they did with panache and appalling losses, prompting the watching French Marshal Pierre Bosquet to remark ‘C’est magnifique, mais ce n’est pas the guerre, c’est de la folie’ which translates as ‘It’s magnificent, but it’s not war, it’s madness’.

Fast forward almost 160 years and similar orders were given by EU leaders to Cyprus. This time there was no miscommunication, simply arrogance and miscalculation. The attempted appropriation of a portion of the savings of bank depositors in Cyprus has set an unambiguous precedent that bank depositors in marginally solvent EU countries are now seen as a legitimate source of funds to shore up failing EU banking systems, and despite the overwhelming rejection of the plan by the Cyprus Parliament that precedent remains, though short term the EU has overnight been pulling back from their threat to pull ECB support from cypriot banks and force them into immediate bankruptcy unless Cyprus proceeded with this plan.A nod here to german comedian Wolfgang Schauble for his hilarious comment this week that the situation in Cyprus is ‘unique’ and sets no precedent for deposits elsewhere. Who says Germans have no sense of humor?

What does it mean now that the ECB (and IMF) have put forward this plan? It means that in addition to receiving almost no interest on their deposits in EU banks, depositors now know that their cash assets may be subject to arbitrary seizure by marginal EU governments with the full support of the ECB and IMF. What will be the effect of this going forward? Well it is very hard to imagine that this won’t lead to serious capital flight from banks in Cyprus, Portugal, Italy, Ireland, Greece and Spain, and that capital flight may then force those countries into bailout plans that they might otherwise manage to avoid. It is quite simply an act of monumental stupidity on the part of the ECB and the Germans that might well precipitate the financial meltdown in Europe that they have so far gone to unprecedented lengths to avoid.

As with the doomed Charge of the Light Brigade however, there is a magnificence, almost even a grandeur to the actions of the ECB here. In a western world where central bankers, politicians and economists have been competing hard to find the fastest and most certain roads to insolvency and ruin it almost stirs the soul to see the ECB pull so effortlessly ahead of the pack.  In a world where our rulers have wasted our assets, mortgaged our future, and have recently been burning the economic furniture to maintain the illusion of warmth, there is something almost inspiring about seeing the ECB move confidently to the obvious next step of setting fire to the house.

At the risk of giving the ECB far too much credit for their planning skills, I will let Bluto and Otter of Delta House speak for them in my favorite scene from National Lampoon’s Animal House. Let this be my salute to the ECB, a place where inspirational courage is eclipsed only by breathtaking stupidity:

Moving on to the markets, we have seen a strong recovery overnight after the rejection of the plan by Cyprus and the ECB’s indication that liquidity would not be withdrawn from Cypriot banks. ES has formed a triangle over the last couple of days and that has broken up in the last couple of hours:

Looking at the SPX 60min chart the RSI has hit 40, which was my minimum target for this retracement. We could still see more but I can’t see a good technical reason to expect that here: 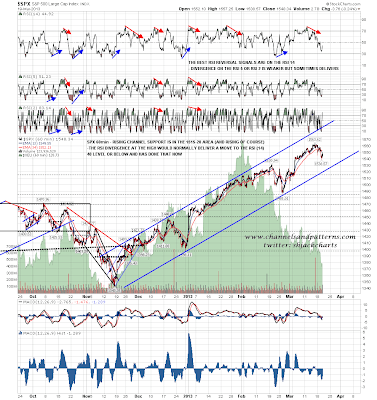 EURUSD broke below 1.288 support briefly yesterday and has since recovered back above. Technically we could see a decent rally here but this Cyprus debacle is likely to depress EURUSD over coming months as bank deposits are moved from the Eurozone to areas with clearer attitudes towards property rights:

A move to test the current high on ES seems likely here as long as ES can manage to do what it failed to do yesterday in taking out the intraday high on Monday. There is a possible double-top back at the current highs but ES could easily go higher. We will most likely see another larger retracement soon however.