The overnight decline on ES didn't follow through on Friday and I'm in two minds about further downside this week, though there is a decent setup for considerable further downside on a conviction break below 1485. ES is forming a triangle at the moment and we'll see which way that breaks. Even if the retracement low is in however, there is still a decent argument for that low to be tested. It won't be long before rising support from the November low will reach the 1485 level, and at the least I would like to see that trendline confirmed with a third touch: 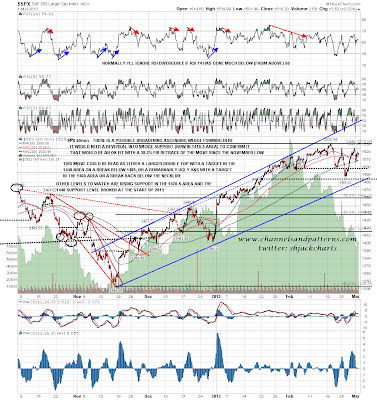 SPX is closing close to the daily middle bollinger band. Upper band resistance is at 1532 and lower band support is at 1492: 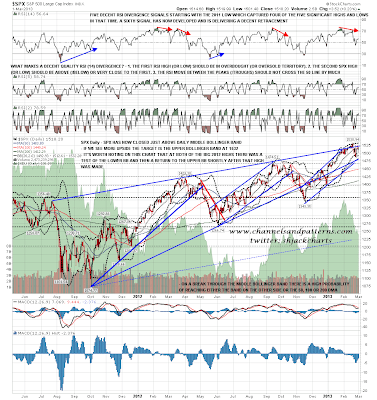 A quick look at AAPL today. AAPL broke marginally below the January low on Friday but hasn't yet seen a break that would break below main rising channel support on the weekly (LOG) chart. If AAPL falls to falling wedge support in the 400 area though, that main support trendline would break. Overall though this chart still has a bullish feel for the next move, with the bullish falling wedge and strongly positive RSI divergence on the daily chart: 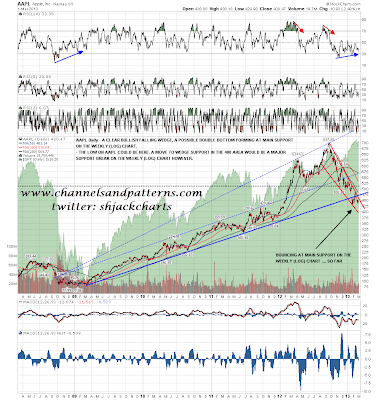 I've been posting the symmetrical triangle on copper futures for many months now and this is finally breaking down. Main trendline support is not far below at 332 but obviously copper is still not joining the current QE party as yet:

EURUSD is struggling to hold the 1.30 level and we could see a bounce here. The bigger picture though is the double-bottom on DX and the current move from there towards a test of the 2012 highs just above 84. While that is in progress EURUSD is likely to struggle and the next big support level is in the 1.29 area. Here is the DX chart:

So what's next on equities? Increasingly I'm feeling that the retracement low is in, though I think we might well see a retest of the current lows. Apart from anything else this retracement has been taking a while now and I'm expecting to see another push up into the main Spring top time zone between late March and early May. What ES hasn't done yet is break above the Feb 25th high, and when we see that I will assume that the retracement low is in, though we may well then see more range bound chop before a definite break above the current 2013 highs.