Having been involved with high-tech since 1979, and having lived in Palo Alto since 1984, I have some acquaintance with the psyche of the Silicon Valley. It has long been a very imitative place, in spite of its frequent self-praise with respect to innovation and “outside the box” thinking (the phrase itself being quite cliche and, itself, very inside-the-box).

I well remember being at Apple during the late 1980s and early 1990s when an entire series of CEOs went in one door and out the other, as Apple fumbled about, trying to find a real “leader” in the post-Jobs and post-Sculley era. John Sculley was never a shining beacon of unfettered genius, but he looked like the Mozart of Managers compared to the bozos that headed Apple (however briefly) during those years. One I remember in particular was a guy named Allan Z. Loren, shown here (I have no idea what the bikes are doing there; it’s the only photo I could find). In case it’s unclear, Loren is the one with the gigantic nose on the left. 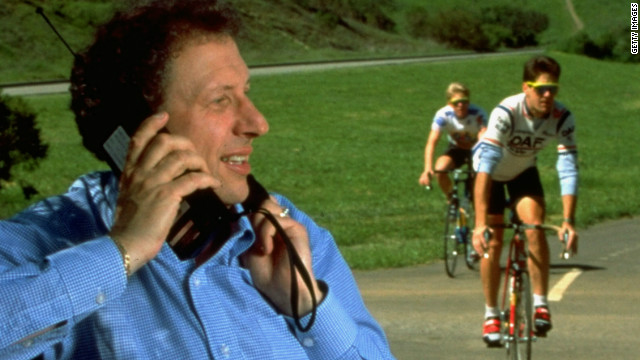 God’s formula in creating Allan was simple: (1) take Steve Jobs; (2) remove all the creativity and vision; (3) slap on a vaguely-unattractive face on his head. That was pretty much it.

In spite of this, the Vice Presidents at Apple did what they always do: tried to find subtle ways to ape the behavior of their superior. One particularly bizarre example was croakies: that is, the string one puts on eyeglasses so they can dangle like a necklace when you’re not using them. Loren wore them and so, one by one, any manager who happened to wear glasses started wearing croakies. This didn’t lead to any particularly innovative products during those years, in case you want to know.

The imitation of success, based on the notion that copying the habits of others will yield similar success, is alive and well in these parts. I could take you to Stanford University, a brisk walk from my house, on any day of the week, and show you the legions of mothers from mainland China who are there with their government-sanctioned sole offspring, peering through their gigantic sun visors at the campus. I know precisely what they are thinking: if my kid gets in here, he’s going to be the next Larry Page. (Tim’s Pro Tip: he isn’t).

I was reminded of all this when yesterday I read about a new entity called Startup Castle. Simply stated, this is a place that is based on the theory that if you get a bunch of highly-educated, young, energetic, and relatively homogenous people together and put them in the right venue, magic is going to happen. This is implied at once from the site’s home page:

Now this isn’t a metaphorical “castle”. They’re not holding this members-only club at some coffee shop. It really is a very grand place, and if you are fortunate enough to be accepted, you get to live here: And a look at some of the thumbnail photos on the site quickly get across the premise that this is a huge, rich, and very exclusive place:

But by no means should you think this is all about striking it rich like Zuckerberg, Jobs, Brin, Ellison, or any of the other Valley luminaries. No, no, no. The site quickly dispatches any connection with filthy lucre by offering up these nausea-inducing bromides that are intended, I suppose, to convince you of the higher purpose that awaits you (the highlights are mine): Now before you are ready to have your spirit cleansed or your mind freed from addiction, you actually have to be accepted into the place. And, rest assured, this is no mean feat. There is a long list of requirements, including:

But the list is much longer than just that; here are some more (let me just jump in here right now and assure you I am not making these up):

Again, I am leaving out a lot of other requirements, because there’s only so much of this stuff I want to re-type. A representative from Start-Up Castle (whose acronym, I’ll quietly point out, is S.U.C.) stated that the rules were not meant to be discriminatory, but that the founders were just “trying to get away from people who were obsessed with themselves.”

I’ll just give you a moment to let that sentence sink in, since it’s hard to conjure up a place more likely to be populated by hyper-narcissistic navel-gazing douche-nozzles.

I’m not sure how many qualified candidates will ultimately be housed in this success-pit, but don’t let the dazzling facade of the place throw you. The bedrooms they feature on the web site appear to be the kind of thing you’d sleep in when visiting your elderly parents who have cleared away a room for you to stay in over the Thanksgiving holiday: Of course, just because I have the good fortune to live in Palo Alto doesn’t mean I’ve had my head completely poisoned by the rampant nonsense flying around this place. Nor has it destroyed the good sense of the folks on my Facebook feed chiming in with their own reactions: Innovative, successful companies are formed due to almost astronomically-unlikely pairings of the right people, at the right time, in the right place. And that place isn’t going to be Startup Castle. Promise.