A copyright-free photo of Shanghai at night.

An Inauspicious Time To Invest In China?

When a Chinese stock appeared among our top names on Friday, we thought of the many recent new articles arguing this is an inauspicious time to invest in China. Consider a few of them:

In the latest sign that the unfettered growth enjoyed by China’s tech giants is coming to an end, Beijing has unveiled a raft of new regulations that reasserts the ruling Chinese Communist Party’s authority over every aspect of its citizens’ digital lives.

Among the new regulations: a law that reduces the amount of time that children and teens are allowed to spend playing video games to just three hours per week, and a directive banning online celebrity fan clubs.

China officially has a “male feminization” problem. That’s not some throwaway line or social media meme. It’s actual policy from the nation’s education ministry, which plans to strengthen physical education for the nation’s adolescent boys to combat the phenomenon.

Beijing’s rewriting of social norms doesn’t end there, and will continue for years as President Xi Jinping leads a neo-Cultural Revolution that has already hit the education, technology and gaming sectors and is destined to spread further.

To emphasize the point that this is Not Okay, Bloomberg includes the photo below illustrating what might be threatened by the new policy.

Regarding Bloomberg’s mention of the gaming sector in China’s crackdown, here’s another headline: “Bets Are Off After Casino Owners Get Hit On China’s Crackdown” (Bloomberg, via MSN).

There’s a debate over whether China is even investable now. You never like to see increased regulation, increased taxes, restrained movement. That all seems to be the status quo.

Indeed, the charts of Chinese mega caps like Alibaba Group Holding Ltd (BABA) and Tencent Holdings Holding Ltd (TCEHY) along with Wynn Resorts (WYNN), which has casinos in Macau, are inauspicious.

But if we look at the big picture, maybe China as a whole isn’t uninvestable, just the parts of its economy that facilitate gambling, celebrity worship, transgressive displays by sexual minorities, video games and other activities the Chinese government wants to minimize. The Chinese stock that hit our top names on Friday doesn’t fall into any of those categories.

Coming in at #8 on Friday’s top ten was the Aluminum Corporation of China, ltd (ACH), commonly referred to as Chalco.

A glance at Chalco’s website suggests why the company might not find itself in the same crosshairs of the Chinese government as the companies mentioned above. The Profile of the Company page leads off with a photo showcasing where its aluminum is used: in skyscrapers, fighter planes, bullet trains, and rockets — presumably, all good things from the Chinese government’s perspective.

In Case We’re Wrong About ACH

Our system’s potential return estimates go out six months. In the event we’re wrong within that time frame, here are a couple of ways you can own ACH while strictly limiting your downside risk.

As of Friday’s close, these were the optimal put options to protect against a >25% drop in ACH by mid-February. 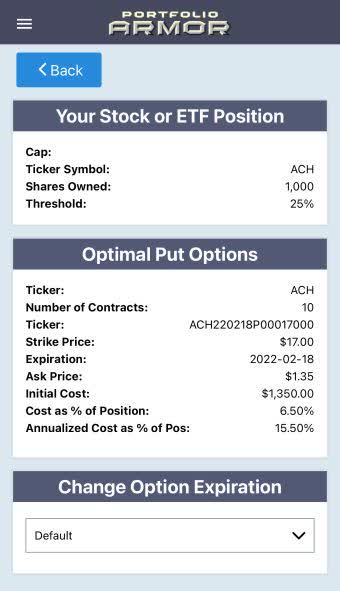 This and subsequent screen captures via the Portfolio Armor iPhone app.

If you were willing to cap your possible upside at 30% by mid-February, this was the optimal collar to protect against a >25% drop in ACH over the same time period.

Here, the net cost was $0, as the income from the short call leg matched the cost of the put leg.

A quick housekeeping note: we’re raising the price of our app and our website next week. Those who have downloaded the app or subscribed to the site before then will be grandfathered and retain the current pricing.

https://slopeofhope.com/2021/09/a-contrarian-bet-on-china.html
A Contrarian Bet On China