Contrary to common belief, as the U.S. struggles, the world will be forced back into finding real dollars, and abandoning the emerging markets, why?  It all has to do with leverage. The dollars that circulate pale in comparison to that which is borrowed into existence to fund speculation.

We are now entering the third speculation rinse out in a decade, and this will cause a rush for real dollars.  EDZ is a prime beneficiary of this move, and I easily can foresee a revisit to new highs.

I currently own some shares, and will add on this upcoming relief rally (dollar weakness), but options are nice for some additional leverage.  Right now the vol is too high to buy options, but I will sell strike 15 puts to pick up some shares at a discount, and will buy Jan 12 calls OTM that will give me potential 5 to 1 return at my target price, on my next buy signal.

On a shorter time frame you can see a cup formed and now I suspect a handle before we really breakout. 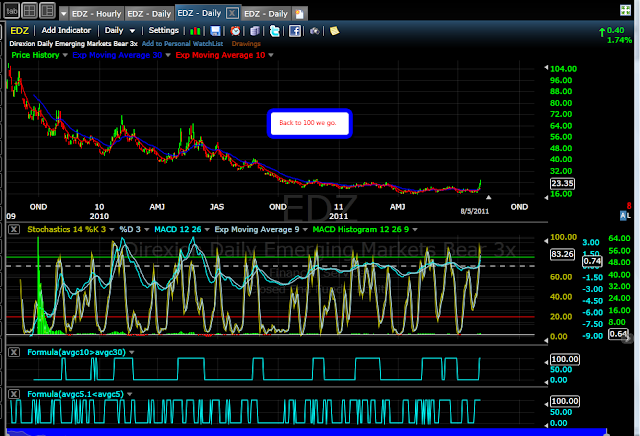 FWIW, here is my current view on things:

In our world today, it is indisputably clear for all to see, that a globe made up of individual sovereign states governed by nationally elected statesmen has almost completely ceded way to a new paradigm.  The international banking & corporate titans are now the real powers directing world affairs.  To understand what comes next in our economic outlook, and how the market may react to it, it is essential to think about what these new centers of power are interested in.

The first order of business for our new masters, is to take full advantage of the sovereign debt crisis now imploding in Europe.  Rahm Emanuel's mantra comes to mind "never let a major crisis go to waste".  One could even go so far, as to make the case, that the current debt crisis now engulfing Europe was actually initiated by the financial oligarchs themselves, so as to further consolidate their grip on the independent nation states.  After all, it was the financial & commercial elites of the world, that most fiercely advocated for, and imposed the EU & EURO on to the Sovereigns.

Saving Italy & Spain from financial collapse, and protecting all of Europe from descending into a great debt depression will no doubt be sighted as the reasons for their bold actions.  But the real and much more sinister motivation, is to use this crisis, to further consolidate the powers of the EU & the international banking cabal over the Sovereigns, by creating a Pan European bond market.  The final result, will be the near total evisceration of the national right of a country to direct its own monetary & fiscal affairs.  All of this delivered without even one vote ever being cast by a Nation's own people.

So here is my take on how this raging European debt crisis will unfold.  A new stealth QE3 will be devised by the upper most echelons of the international banking cabal.  The heads of the TBTFs both here and abroad, world renowned financial industry wizards, and esteemed economic academia, will assert their influence on the FED / Treasury to roll out the following.  Let's call it Evil Plan 3.0………..

The FED will implement its established currency swap lines to wire massive amounts of new digital USD currency to the ECB.  The ECB will then use these new funds, much like the FED did with TARP & QE2, so as to shore up the European banking system, instill confidence in national bond markets, and support all financial asset classes.  These actions will also serve to prop up the EURO, and keep downward pressure on the USD.  Both of which are desired outcomes by international banking & multi-national corporate interests.

So how will this effect the U.S. equity markets you ask?  My best guess is, that this newly unleashed liquidity Juggernaut will once again find its way into all financial risk assets.  So after this policy is announced over the weekend, and is implemented next week, I am expecting a sharp relief rally which normally would be quickly sold off, but much to all our surprise, will sustain itself, and possibly carry the market back up near 1300……….PMs should continue to shine brightly (Happy B-Day Dutch!).

Yeah, yeah, the downgrade, I know. An article on biofuels doesn't speak to its urgency. But I was on a plane. To explain:

I'm a bit of a nervous flier. I guess, being somewhat of a control freak (ahem…….), it's unsettling to be in any situation in which I have absolutely no control over what's going on. After all, if an airplane gets into trouble, the most I can do is chat with God and work out the terms of the life of charity I shall lead in exchange for not plummeting to earth in a metal cylinder.

So as I was flying from Chicago to Denver yesterday evening, there was a large thunderstorm positioned directly – and I mean directly – over the Colorado Springs airport. The woman next to me, whom I guess had been through this kind of thing before, said, "we're going to be up here a while." And she was right.

We made a huge circle around the storm for half an hour, spending about half the time violently shaking as the air buffetted us. It was the worst plane right I had ever been on, and all I could think about was how nice it would be to get us safely landed on the ground. The shaking and the flying seemed interminable, and I kept worrying who would NEW POST this site for the rest of eternity if I were to perish at such a youthful and surprisingly handsome age.

Well, I obviously made it, and my pact with God was amorphous enough that my spending time sharing my thoughts on the market for no charge strikes me as adequately charitible that I think God will approve. So I resume to the struggle.

So the big news is that S&P has declared that, in a nutshell:

Not to do S&P's job, but I'd like to supplement their findings with some other equally salient facts:

+ Ophra Winfrey is, and always will be, on the fat side;

So how will the market react? I'm not sure. I've become so accustomed to perverse market reactions that I would not be surprised at all – in fact, I would be kind of pleased – if the market wound up closing higher on Monday.

As a bearish sort (perhaps I should have added Tim is a Bear to the bullet points above), I am obviously pleased with the market action we've seen lately. But – as a perpetually dissastisfed sort as well – I keep having two contrary, bummer-like thoughts:

+ I sure wish I had even more shorts on;

I mean, I've been almost purely net short for a while, and last week was beneficial for me, but many stocks that I wanted to short at better prices still got clobbered by 15%, and I was not there to partake.

I tend to have a "bottoms-up" approach to my analysis, and the preponderence of evidence tells me that the shorting opportunity of the decade is coming up, but it requires a substantial bounce to make the risk/reward worthwhile. By "substantial", I don't mean new recovery highs – – but a 4% to 6% push higher on the big indexes would do the trick (which, for some stocks, would mean a 20%+ rise).

As for the Fibonacci time series, I remain blown away that the video I did on May 2nd (which, conicidentally, was the recovery high) specifically mentioned August 5th as the bottom for the cycle. What's the next bottom? It looks like February 3, 2013 – – which would make a certain amount of sense, since whoever President we wind up with in November 2012 will probably start off with a market that's in a death-spin.

In any event, I remain totally short, but only lightly committed, and Monday bears very close watching. Have a good Saturday.