I posted a channel derived from my friend Alphahorn's chart on Friday, but I regretted not posting the original chart to give the proper context. Alphahorn is running a primary bearish scenario and a secondary bullish scenario, and the high on Thursday was pretty much exactly at the dividing line between the two. Here's the full chart below, and if the red declining channel breaks up, then the bullish scenario will become Alphahorn's primary scenario:

Is this level the dividing line between a continuing bear market or a new bull market? Another indicator I watch suggests that it is, and that is the ichimoku clouds on the SPX weekly chart. Historically a break below the cloud has been a decent indicator of a bear market and a break above a decent indicator of a new bull market. as you can see SPX is testing the top of the weekly cloud. A break above with confidence would strongly suggest that SPX is in a new technical bull market: 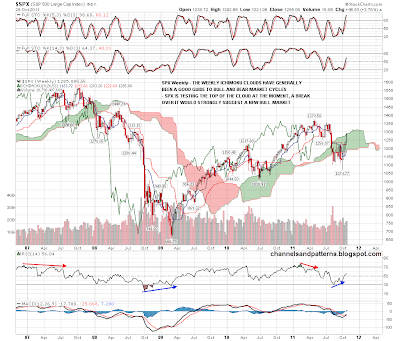 Will we see more reversal here, regardless of whether SPX will later break up? Very possibly. On ES I have a rough rising channel where rsistance has been hit. Strong support should be at 1254.5 ES, which is close to the strong support level at 1257 SPX. A break below with any confidence would strongly suggest a deeper correction, and if the blue channel support trendline were to break, then ES might retrace much of the recent move up:

NQ is suggesting that deeper retracement is possible, with another rough channel there, but more importantly, a test of the 2400 level last week followed by a slightly lower high. That's obviously a possible short term double top and NQ has had some very major reversals from the 2400 area so far this year:

Such a reversal may not last that long of course. One thing that I'll be watching is the possible H&S forming on 30yr Treasury futures (ZB) that I've been writing about for the last couple of weeks. As I was suggesting, ZB bounced at 135 to complete the head on this pattern, and has so far bounced strongly almost back into the 138 area. An ideal right shoulder on this pattern would take a week or two to form and target the 141 area: 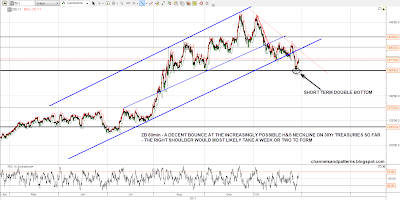 I still have very mixed feelings about EURUSD. It broke up strongly at the end of last week of course, and that looks bullish, but it has since reversed hard and is now below my strong S/R trendline in the 1.41 area. While it remains below there is still a bearish option that the spike last week was just an overthrow on a bearish rising wedge and I'm watching the 1.39 (neckline) level. A break below with any conviction would look very bearish: 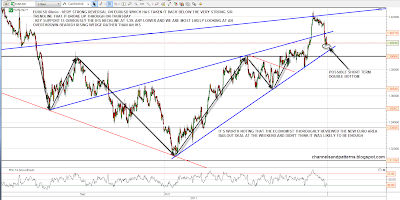 If we do see a decent retracement here, then oil is well worth watching. Oil has been rising within a tight rising channel since the low, and looks as though it may have put in a short term double top. If the channel breaks down this will look very attractive as a short: 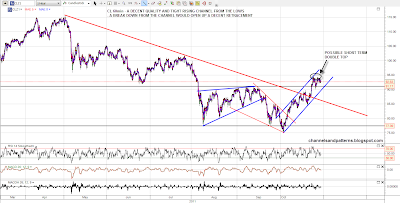 Posts are likely to be a bit shorter this week. The clocks here in the UK changed from summer time at the weekend, and until clocks in the US do the same next weekend, I'll have an hour less in the morning before the market opens. The key levels to watch today in my view are 1257 SPX and 1.39 on EURUSD. Breaks below would strongly suggest deeper retracement over the next week or two, which would fit with the formation of a right shoulder on the big potential H&S on ZB. A break above last week's highs on SPX would look bullish short term and longer term, particularly if sustained into the weekly close.