As long as the market remains below the 1334 level, I cannot feel comfortable in advising anyone to hold long positions overnight, as the bearish patterns are still too dominant. I have 3 different color possibilities being presented tonight, so let’s go through them.

Yellow Count: Within the yellow count, there are actually two possibilities. The first possibility is that we completed 5 waves down from the high made yesterday and today almost completed a wave (2) retracement. What supports this count is that the initial move up off the 1294 low really counted best as a 3 wave move rather than a 5 wave move, which would classify it as an a-wave with the impulsive move up at the end of the day counted as a 5 wave c-wave which could still have a little more upside left. Additionally, if the dollar and the S&P continue to trade in identical patterns, as they have of late, then the dollar count supports the yellow (1) (2) count with wave (3) of wave v of 3 about to begin.

END_OF_DOCUMENT_TOKEN_TO_BE_REPLACED

Good God in heaven, what an insane day! We had the Euro plunge to new 21-month lows only to reverse

and push everything higher – – including GDX, which soared nearly 5%! I covered some shorts earlier today and enjoy some nice gains from precious metals. I closed the day with just one long position – – my very, very large FXE long – – and my "pick of the litter" shorts that are well-formed enough to have survived the riotous bounce today. This market remains unbelieveably treacherous to bulls and bears alike. I'll do a post later once I catch my breath.

Data released on Wednesday shows that the purchase price of homes backed by Fannie Mae and Freddie Mac spiked to a new four-year high, as shown on the graph below.

We'll see whether this spike represents a turning point on increasing house prices (home price bubble forming?)…one to watch over the months ahead. 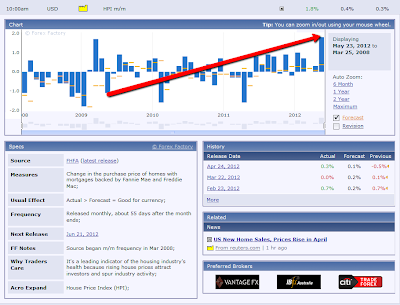 In contrast, MBA purchase applications fell 3% and and the amount of refinancing fell below the prior week's numbers, as shown below…also ones to keep a eye on over the next weeks.

So: yay, me. The sweater vest wins again.