Further to my my last weekly market update, here is a summary of where money flow ended for Week 4 of May 2012.

The Weekly charts below of YM, ES, NQ & TF show that they all closed a bit higher than the prior week on lower volumes. Price is hovering just above the lower Bollinger Band and the 50 sma (red). In the case of the NQ, price is still within its rising channel from the 2011 low. The YM and ES are trading just above longer-term trendline support, whereas the TF is just below price resistance. 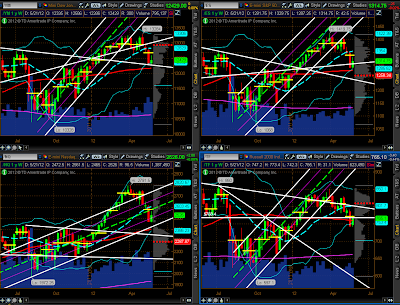 END_OF_DOCUMENT_TOKEN_TO_BE_REPLACED

For a few weeks now, I've been almost completely in-synch with the market. The last couple of days have been a bit disappointing, because they went like this:

So on both days, I saw a nice profit flip around into a loss half the size. Neither loss was horrible by any measure, but it's disspiriting to work hard and see green become red.

And, in each instance, it was a full-on-retard ES spike near day's end that did the damage. So, besides looking over my shoulder at all times for the Bernank, now I've got Euro-rumors to worry about.

Thus, I remain 50% in cash with the other 50% in a bewildering variety of small short positions. The Euro precisely reached my 1.25 target (and, for good measure, even dipped 5 pips beneath it), so objectively speaking, I've got to wonder if it's Euro-bounce time. My GLD and SLV hedges from last night were closed profitably this morning, but I really can't join the bull bandwagon right now.

I continue to monitor the Russell 2000 closely; the head and shoulders formation is very well-formed, but it's unclear to me which neckline possibility (each of which I've tinted) will be reached. The depth of the Euro's sell-off urges me to remain cautious, so I'm not as fervantly bearish as I was in recent weeks.