Further to my last weekly market update, here is a summary of where money flow ended for Week 2 of May 2012.

The Weekly charts below of YM, ES, NQ & TF show that they closed lower than last week's bearish engulfing candle, except the TF, which closed marginally higher. They are still range-bound from January. Until we see price break out of this range one way or the other with conviction on increasing volumes, we may see an attempt at a bounce on Monday. 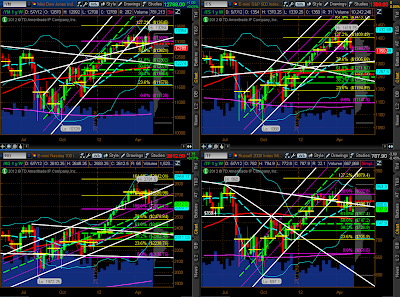 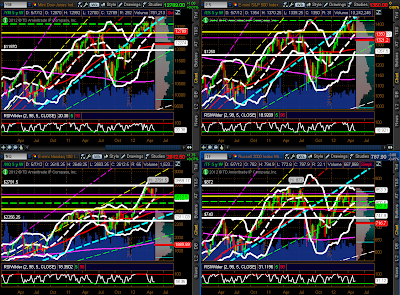 The 4-Hour charts below of YM, ES, NQ & TF show their respective intraday ranges from the latter part of March to Friday's close. The YM & TF are just above the 100% Fibonacci retracement level, and the ES & NQ are just below the 100% level. In the short term, if I were to apply the same rating parameters as above, the YM & TF are bearish, and the ES & NQ are SELLS below the 100% level. If they break and hold below these ranges, they would each, potentially, have a target of: 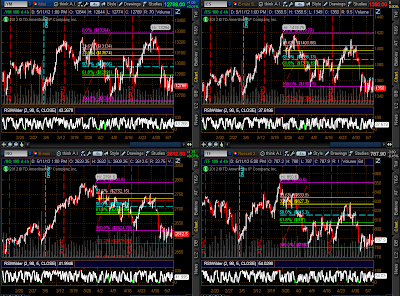 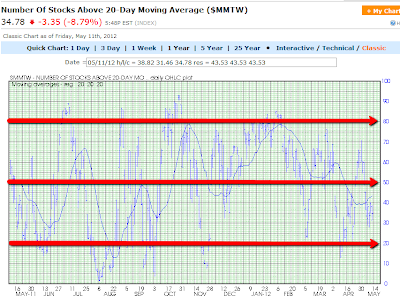 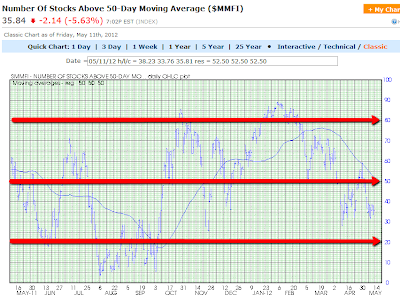 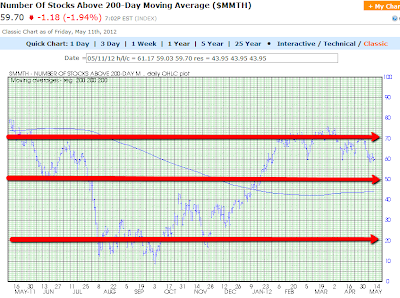 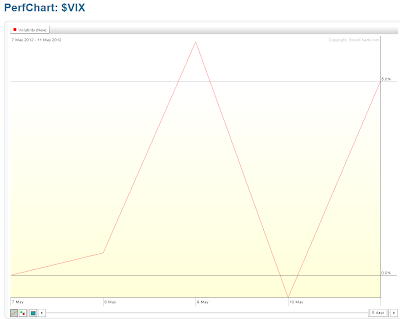 Further to the comments in my last weekly market update, the Daily ratio chart below of the SPX:VIX shows that that the SPX continued to bounce around in between the 50 and 200 smas. The RSI, MACD, and Stochastics indicators are still trending down…however, the Stochastics has crossed up. Near-term resistance and support are at 75.00 and 65.00, respectively…the next levels are at the moving averages, namely 81.34 and 55.85, respectively…important levels to watch. 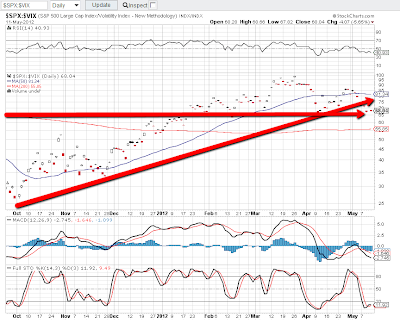 The Daily chart below of the VIX shows that price is sitting at the apex of a triangle…a breakout is inevitable next week…one to watch for potential direction and follow-through. 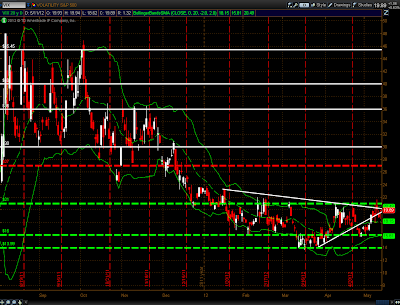 As shown on the graph below of the Industry Groups, they all declined, with the exception of Biotech. Brokers, Gold/Silver, Banks, and Oil Services led the losses. 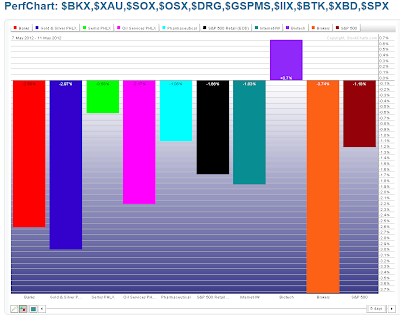 As shown on the graph below of the Major Sectors, they all declined, with the exception of Utilities. Financials, Materials, Industrials, and Consumer Discretionary led the losses, while Healthcare and Consumer Staples lost the least…markets still favour the defensives. 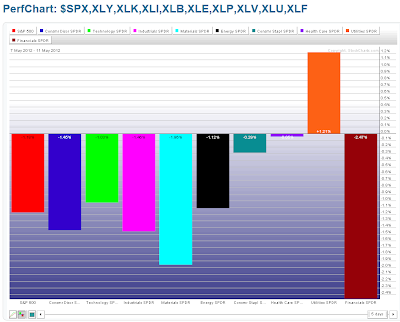 As shown on the graph below, the biggest losses were in the Chinese Financials ETF (GXC), followed by the European Financials ETF (EUFN), Emerging Markets ETF (EEM), the U.S. Financials ETF (XLF), Agricultural ETF (DBA), and the Commodities ETF (DBC). 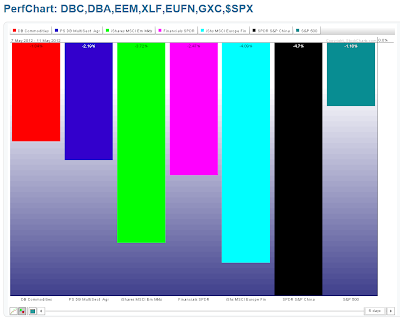 There was more soft data out of China on Thursday and Friday, as shown below.

The Daily chart below of the Shanghai Stock Index shows that price is, basically, trading within a very large triangle and it closed on Friday in between the ever-narrowing 50 and 200 smas. The RSI, MACD, and Stochastics indicators are hooked down. Near-term resistance and support are at the moving averages, namely, 2420.58 and 2384.60, respectively. The next resistance and support levels are at 2450 and 2300, respectively…one to watch. 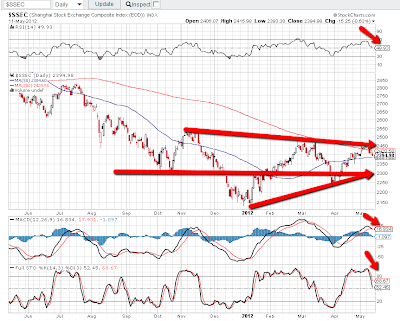 As shown on the graph below, the largest losses were made in Silver, followed by Gold, Copper, and Oil. 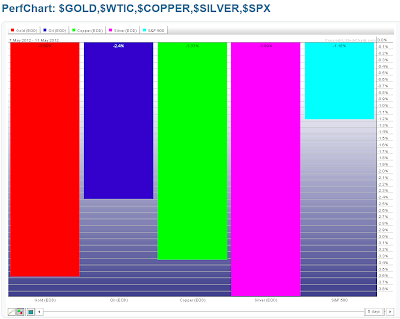 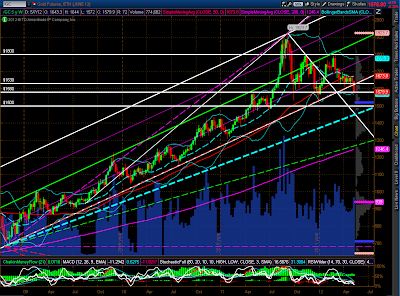 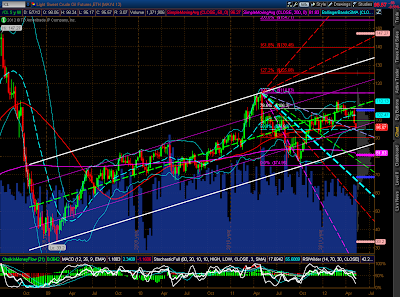 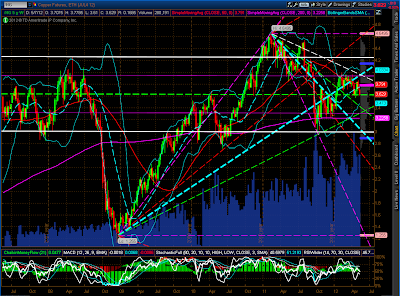 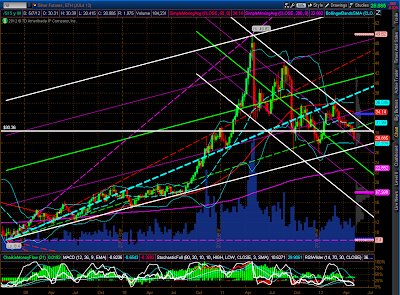 As shown on the graph below of the Major Indices, the Dow Utilities gained, while the Dow Transports declined the most, followed by the Dow 30, S&P 500, Nasdaq 100, and Russell 2000. The Emerging Markets ETF (EEM), suffered large losses, while minor losses were taken by the High Dividend-Paying Stocks ETF (DVY), and Corporate Bonds (JNK). 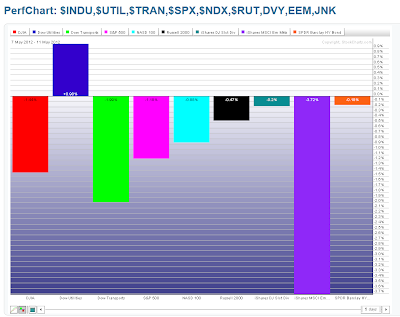 As shown on the currency graph below, money flowed into the U.S. $, and out of the Aussie $, the Euro, the British Pound, and the Canadian $. 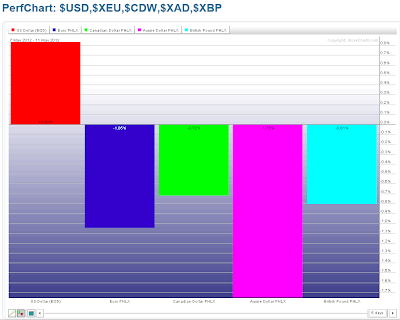 The Daily ratio chart below of the SPX:U.S. $ shows that the SPX continued to weaken in comparison to the $ and now sits in between the 50 and 200 smas. The RSI, MACD, and Stochastics indicators are trending down, although Stochastics is attempting to cross up. Resistance levels are at the 50 sma (17.43), and 18.00. Support levels are at 16.50 and the 200 sma (16.33). Ones to watch to see if the SPX continues to weaken against the U.S. $. 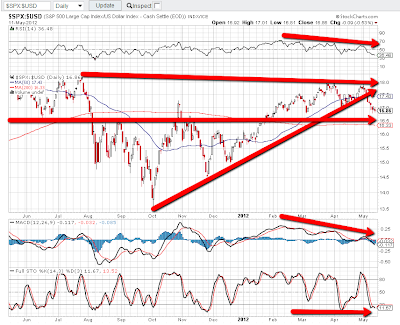 My post of May 10th mentioned that JPM fell in after-hours trading due to $2 billion in trading losses. The Daily chart below shows the large gap down and where JPM closed on Friday. Price is sitting on a confluence of Fibonacci levels and the 200 sma. 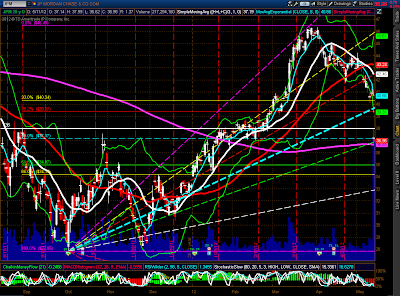 This Daily comparison chart below of the Dow 30, S&P 500, Nasdaq 100, and Russell 2000 Indices, as well as JPM, shows that JPM was outperforming on the advance from the October 2011 lows until Friday's close. 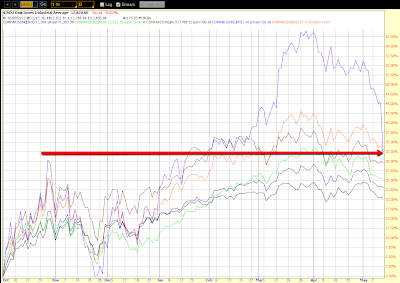 The Daily ratio chart of NDX:JPM shows a huge gap up by NDX in comparison (reflecting JPM's weakness) on Friday. Immediate support sits at 70.00. It's a chart I'll be following to see whether the NDX continues to advance, with JPM falling further (signalling a potential flight into Technology as a hedge against weakening Financials), or whether the Nasdaq 100 (NQ) continues to fall, as well, as noted above on the 4-Hour chartgrid of the YM, ES, NQ & TF (since the NQ now has a SELL rating, along with the ES)…charts worth watching next week. 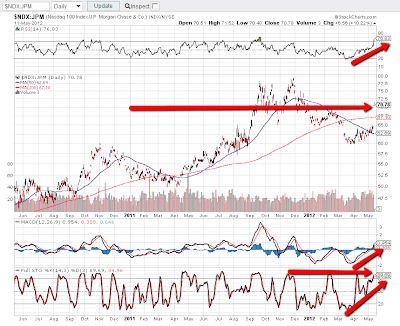 In summary, I'll be watching to see whether more volumes enter the markets next week during intraday action, and in which direction they dominate (and whether they can be sustained), in order to judge relevant moves with conviction. As well, I'll be watching for either rising or declining volatility, depending which way the triangle breakout occurs on the VIX.