The rising wedge on SPX broke down yesterday, and with that break the possibility of a QE fuelled rally into Xmas has died in my view. We have a very significant downtrend in progress and I'm now considering the possibility that we might be in a new bear market, though none of my usual cyclical topping signals are apparent at the 1474 top.

If we are in a new bear market we will need confirmation of that, and as it happens I have a level and target which should deliver that. First though here is the SPX daily rising wedge that has broken, also showing the close also well below the daily bollinger bands. The overnight action so far isn't encouraging for a bounce today, but I would normally expect the underside of the daily lower bollinger band to be tested on an open below it, and that should be in the 1380-2 SPX area today: 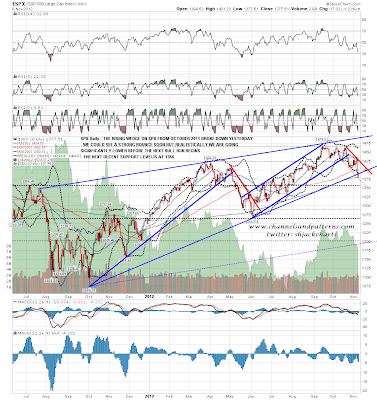 On the SPX weekly chart I was looking at the bollinger band setup there on Monday, with the note that on a weekly close much below the middle bollinger band in the 1409 area, historically there would be a very high probability of a move to test the lower bollinger band, currently in the 1341 area, though I'd expect that level to be a few points higher next week. In the absence of a very big rally today that is the next target. Looking at the six year chart, ten of the last twelve breaks like this made that target, with one of the other two a near miss. Only one of the twelve has recovered back to the middle bollinger band for the weekly close after a break down like yesterday's, and that hit the lower bollinger band two weeks later: 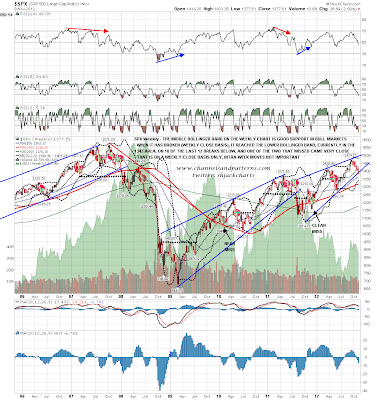 The main target after yesterday's break in my view is the 100 weekly SMA, currently in the 1316 area. This is strong support in a bull market and hasn't been broken for more than a week in the last twenty years during any of the three previous cyclical bull markets over that period. The 2010 and 2012 lows were both at a hit of the 100 WMA and it is the obvious main target here. In the event that we see a conviction break below that, the key target would be the possible H&S neckline at the June low but it would be that conviction break of the 100 WMA that would be a high probability signal that we are in a bear market. One thing that is interesting as an aside on the chart below is how both cyclical bull and bear markets have been getting progressively shorter over the last twenty years. Worth a look: 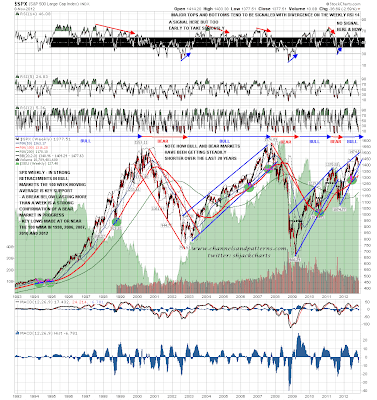 I haven't got much to add to that in terms of targets for today as the decline yesterday has done very serious damage to my declining channels. The declining channel on NDX was pinocchioed but looks likely to break down at the open in the absence of a strong recovery in the next hour; 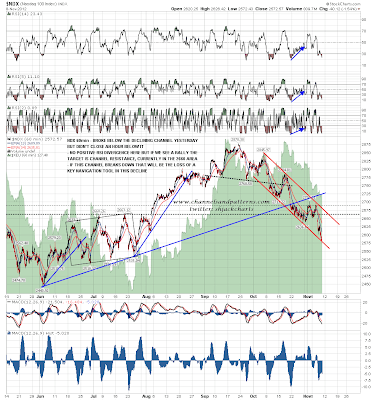 I have a possible declining channel on SPX, but again it looks as though that may die at the open. There is no 60min positive RSI divergence on either of the SPX or NDX charts here: 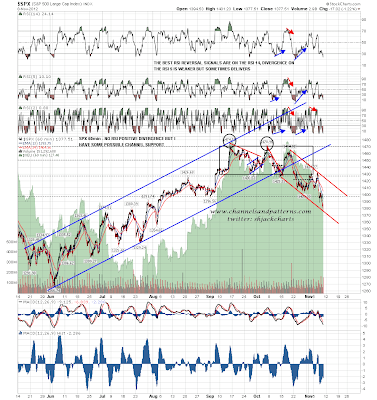 My very nice declining channel on ES has already been trashed at the close yesterday and even more so overnight. This is no longer a useful guide to this decline, and that's a real shame as the lower trendline particularly was a good performer until yesterday:

AAPL broke towards 520 area support but that isn't as good support in my view as 565 area support was. On the bigger picture on AAPL here is the updated version of the longer term chart I posted on 13th September when I first started looking at the bear setup on AAPL. This is the rising channel on the weekly (LOG) chart, and as I noted then, longer term support is slightly above 400, and the scale of that decline would be in line with all but one of the five previous declines signaled on the weekly RSI over the last twenty years. AAPL is now well over halfway to that target and may reach it: 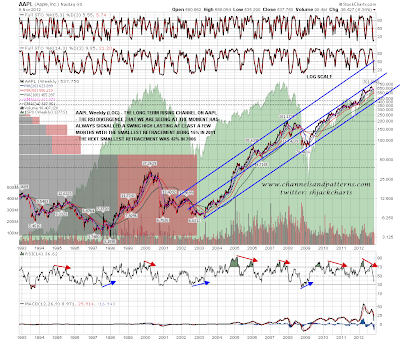 I've neglected other markets today so I'll just add that gold broke up yesterday, with the obvious target at 1800 area resistance, though if we are in a new bear market gold saw large declines in both of the last two bear markets. Oil is still potentially bottoming out short term but would most likely need some support from equities to rally much. My EURUSD target is still the 1.244 area.

The current target on SPX is the weekly lower bollinger band at 1341. Statistically we would normally see a decent attempt to test the underside of the daily lower bollinger band in the 1380-2 area today, and a market trading below the daily lower BB generally makes smaller incremental moves rather than the large decline we saw yesterday. That was also true yesterday morning however. If ES can hold the current overnight low at 1363 then we could see a decent bounce today, with obvious resistance at 1381.5.