As I was saying in my post yesterday at MarketShadows, SPX hit, or near enough to qualify, the weekly lower bollinger band at the low on Friday, and that fulfills that target which was triggered by the break of the weekly middle BB at the close last Friday. This level is decent support and it's possible that a significant swing low has been made, though the H&S target on SPX in the 1325 area has not yet been reached and there is no positive RSI divergence at this low on the SPX daily chart: 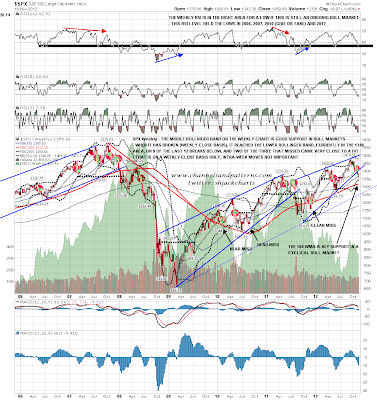 Short term I'm expecting a decent bounce. Two reasons for thinking that are the bottoming tail candlestick on Friday, and the strong close away from the daily lower bollinger band from that low. If a significant low has been made then we will see SPX recover over the very strong resistance in the 1390-1405 area. If not then we should expect a strong reversal back down at either the retest of the 200 DMA in the 1382 area or that resistance not far above: 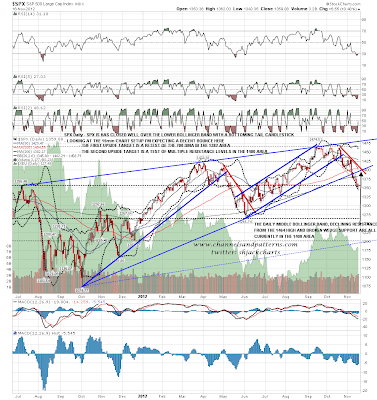 The reversal setup on the SPX 15min chart is also strong. There is a clear bullish falling wedge from the 1433 high that I posted on twitter intraday on Friday, and that broke up near the close. There is also an upsloping IHS that is forming, though it hasn't broken up yet. If it does break up, and I am expecting that it will, then the target will be in the 1380 area, just under the 200 DMA at 1382: 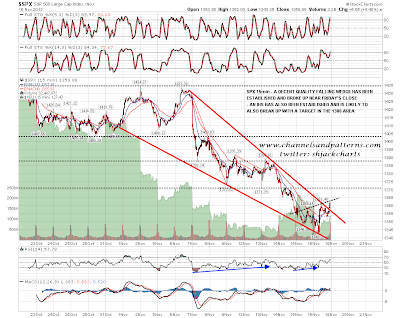 On other markets I was looking on Wednesday and Friday last week at the possibility of seeing some retracement on TLT from strong resistance in the 127 area. I'm very much expecting to see that now and the obvious target is rising support in the 124 area: 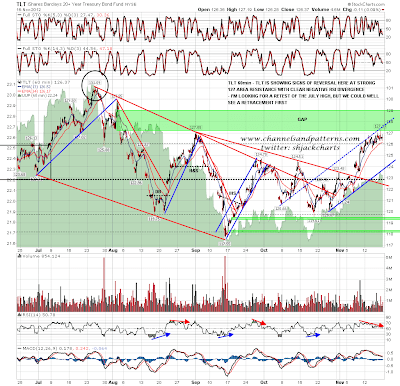 EURUSD is starting to look bullish on the 60min chart. There is now a clear higher high and low, and a possible upsloping IHS forming that could take EURUSD back to the 1.295 area on a break above the neckline. On a break back over 1.28 I'll be looking at that setup with great interest:

CL is still trading sideways in what looks like corrective consolidation before another move down. There is still a possible double-bottom setup on CL but that will only start to look interesting on a break over declining resistance in the 87.4 area. Unrest in the middle east could obviously give the CL bulls a strong boost here but that's not apparent yet:

Have we made a major swing low? In favor are the hit and reversal at the weekly lower bollinger band, and the seasonality, with SPX up nine of the last nine years I think in the period between Thanksgiving and Christmas. Against that are the failure so far to hit the SPX H&S target in the 1325 area, and that to see a strong classical low on the SPX daily chart on positive RSI divergence, there would generally be a decent bounce before the main low is made. This may well be that bounce. Resistance levels above on SPX are clear and stated above, and I would add to that resistance on ES in the 1386-8 area, with the note that resistance there is also a possible IHS neckline, so an initial failure there would not necessarily be bearish.