I am sure it is not unique, but worth sharing nonetheless.  My view is the Federal government is desperate to get the stock market back to being the tax revenue engine it was under Bill Clinton.

Incomes are flat, and national income is not going to be growing anytime soon. They have a problem; how do they goose the stock market and yet control inflation in food and energy.  Their answer has been suppression.

END_OF_DOCUMENT_TOKEN_TO_BE_REPLACED

I have written many times here on Slope about my distaste for the for-profit education industry. As I’ve said in the past, the business model is simple:

(a) trick poor saps who are unemployed and watching TV at home into thinking that an “education” from thus-and-such organization will make them profoundly desirable to employers;

(b) extract cash from the nimrods of the US Federal Government into bankrolling the “education” so that “workers” can be “retrained” for the “economy” so they can go get “jobs”;

(c) wash your hands of the entire affair when the aforementioned sap graduates with his phony-baloney degree, fails to get a job, is unable to pay the student debt, and leaves you and me (the honest, hardworking taxpayers) holding the bag.

It’s a scam, and it’s an exploitation of the ignorant as well as the rest of the American public. Indeed, the scam is so screamingly obvious that over the past couple of years, even the bozos in our government have finally realized that they are being subjected to lubricant-free rape, so they aren’t shelling out as much cash anymore. Thus, fine institutions like DeVry, Phoenix, and ITT Educational Institute have been withering away.

As far as ITT (symbol ESI) has fallen, it’s down nearly another 20% today, thus making its loss over the past few years something close to 90%. During the past few weeks, I guess some folks figured the stock had bottomed and gobbled it up. Oh, well. Firm support for stocks in this industry is at $0.00.

One of the few charts I've actually liked on the long site is symbol ANR, Alpha Natural Resources. The last breakout was a headfake, but the most recent one seems to have holding its own. I'd trust it as long as it stays above 9.40.

The laughingstock of IPO-land from last year looks like it's shaping up to be a winner for the bulls. Volume is strengthening, and the IPO is becoming a distant memory. It still has a long way to go before all buyers are safely in the green, but let's face it, Facebook is a virtual monopoly in the world of social networking, and it's got a very strong management team. As long as it stays above 25.14, the stock is on a constructive path higher.

The first nine months of last year, AAPL was every bull's best friend. The path to $1,000/share seemed inevitable. Ever since then, however, AAPL has been stinking up the joint, and even with the latest mega-rally, fueled by patented retard-o-power, the Cupertino company refuses to participate. A break below $500 would accelerate the trajectory to my long-held target of about $440.

SPX closed another day of riding top of the daily upper bollinger band on Friday. Moves like this can last a few days, and in another three days SPX could test the September high doing this without breaking the current rising channel. I'm expecting to see some retracement before that though, and when we do see some retracement the main target will be the daily middle bollinger band, currently in the 1430 area: 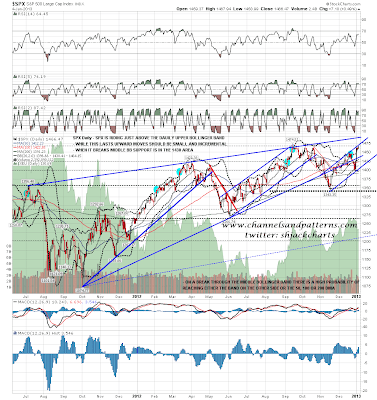